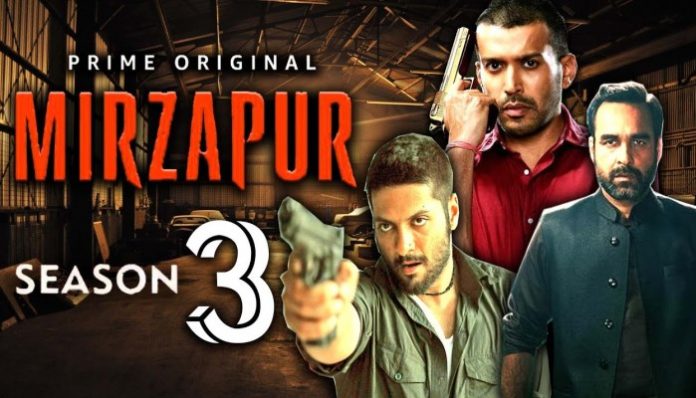 MIRZAPUR Season 3: The third season of the highly anticipated crime series Mirzapur releases soon. Here’s everything you need to know about it including its release date, cast, trailer, and plot.

The most anticipated Mirzapur season 2 arrived in October 2020. It picked up the story from the first season and continued the tale of bloody revenge. Like the previous installment, season 2 also ended on a major cliffhanger, leaving behind a lot of questions. As expected, Amazon Prime Video renewed Mirzapur for the third season. As the fans await the upcoming season, Blogtobollywood tries to find out what will happen next in the raw gritty crime drama series.

What will be the plot of Mirzapur 3?

Mirzapur season 2 was power-packed with lots of twists and turns in its narrative. It ended on a huge cliffhanger, leaving behind a lot of questions unanswered. Fans are coming up with their theories. These are a few rumors and possible story/plot options for the forthcoming season of Mirzapur:

1) A large section of fans believe that Munna (Divyendu Sharma) is still alive and going to come back in the coming season.

2) Guddu (Ali Fazal) will be under heat as he becomes the new king of Mirzapur. Kaleen Bhaiya (Pankaj Tripathi) will come back with all guns blazing to regain power. Expect some out-of-box political tricks from his end.

3) Sharad Shukla (Anjum Sharma) will play a prominent role and we may see him as the new king of Mirzapur. He tries to fulfill his father’s legacy by taking over Mirzapur.

4) Beena will face heat when Kaleen gets to know that he was betrayed by his wife. Maqbool will be under fire for helping Beena and it would be interesting to see how he returns in the coming season.

5) Many believe that Chotte Tyagi is alive. He will play a big role in the third season. We may see Golu getting killed by him.

6) Some true fans of the show have the opinion that Robin’s true identity hasn’t been revealed yet. He will show his true colors in the coming season.

As you can see, there is a lot to explore in the upcoming season. Fazal told Filmfare in an interview: “Now, we have a bigger challenge – to outdo the last two seasons. I will get busy with other projects now, but we plan to shoot soon.”

Who is in the cast of Mirzapur Season 3?

Whoever was alive in season 2, will return for the third season. Ali Fazal will reprise his role of Guddu as he becomes the new king of Mirzapur. Joining him will be Shweta Tripathi Sharma as Golu Tripathi as she avenged the death of her sister (Sweety). Pankaj Tripathi (Kaleen Bhaiya) is will return as dethroned don Kaleen Bhaiya.

Rasika Dugal as Beena Tripathi, Priyanshu Painyuli as Robin, Anjum Sharma as Sharad Shukla will also make return. We can expect Guddu (Divyenndu) to return as the fans are demanding. We would also see some new characters to make things even more thrilling and interesting. Have a look at Mirzapur Season 3 cast:

In July 2021, producer Ritesh Sidhwani shared updates on the upcoming season. He said that Season 3 is in the scripting stage and the filming will start in 2022.

Recently, Shweta Tripathi took to Instagram to share posters of Mirzapur. She captioned it, “I miss Golu a lot. Can’t wait to know what happens next. Can’t wait to be her. Again. This show and everything about it. Thank you for Mirzapur. 1& 2.”

The filming for the third season started in June and is currently in progress at a quick pace. As per the reports of Gadget360 and an Interview given by Pankaj Tripathi (Kaleen Bhaiya) last month the shooting of Mirzapur Season 3 is ongoing and will end by the end of August.

As on Oct 13, 2022, Ali Fazal and Vijay Verma have wrapped up their parts and the filming for the whole season is expected to wrap up in October.

Do we have a trailer for Mirzapur Season 3?

There is no trailer or promotional material released yet. Once the filming concludes, we may get some behind-the-scenes videos on social media. The trailer is expected to release a month before the premiere date.

Season one of Mirzapur arrived in November 2018 with all nine episodes dropping at once. While season 2 was expected to release in 2019, it got delayed several times before finally arriving on Oct 23, 2020.

Amazon Prime Video renewed Mirzapur for season three in November 2020 after it became the most-watched series on the streaming platform in India beating Breathe, Panchayat, and Inside Edge.

Amazon executive Aparna Purohit said in a statement, “The overwhelming response on the new season of Mirzapur is a testament to our commitment and efforts. Over the last two years, viewers continued to engage with the immersive universe of Mirzapur and its characters. Our collaboration with Excel Media and Entertainment has always been wonderful and we are happy to share this success with them.”

Producer Ritesh Sidhwani said: “Across two gripping seasons, Mirzapur has become a global sensation and we couldn’t be happier associating with Amazon Prime Video to make this happen.

“The show’s massive fandom and the viewers’ magnitude of love towards the new season were seen through reactions on social media within days of its release, and we are truly humbled by the response.”

Though the filming for the third season is concluding in October, we won’t be getting it in 2022. Mirzapur Season 3 will premiere on Amazon Prime Video in 2023. The streamer will soon make an official announcement regarding the same. We can expect to release in the second quarter of 2023.

While we await season 3, Mirzapur seasons 1 and 2 are streaming on Amazon Prime Video now.