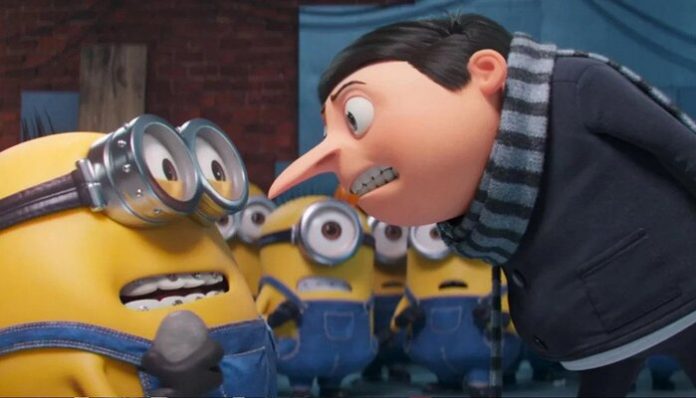 Debuted in theatres on July 1, 2022, Minions: The Rise of Gru is on a record-breaking streak at the global box office. The fifth movie in the Despicable Me franchise has absolutely crashed the weekend box office. The long-awaited prequel to Minions (2015) is the number one movie at the domestic and international box office this weekend.

The animated comedy fetched around three-day earnings of $108.5 million dollars. According to Variety, Minions: The Rise of Gru is expected to reach $127.9 million by Monday. Based on those estimates, Minions: The Rise of Gru will break the record for the highest movie opening over Independence Day, overtaking blockbuster Transformers: Dark of the Moon ($115.9 million over four days).

The opening weekend numbers of Minions: The Rise of Gru has almost reached its predecessor, 2015’s Minions ($115 million over three days).

After Lightyear‘s poor box office opening of $70 million last month, the stakeholders were not assured of the feasibility of animated movies on the big screen. However, the record-shattering shattering numbers of Minions: The Rose of Gru is a positive sign and a testimony that the family crowds are highly receptive to good movies. Family-friendly movies can still be powerful performers at the box office.

It seems that the box office is finally back to normal after a couple of struggling years. Besides Minions: The Rise of Gru, Top Gun: Maverick, and Jurassic World: Dominion continues to rake money. Jurassic World: Dominion crosses the $800 million dollar mark at the global box office while Top Gun: Maverick adds another $35 million to take its overall tally to $1.1 billion.

Minions: The Rise of Gru is also the number one movie globally with estimated weekend earnings of $195.7 million. It has grossed over $220 million worldwide to date.