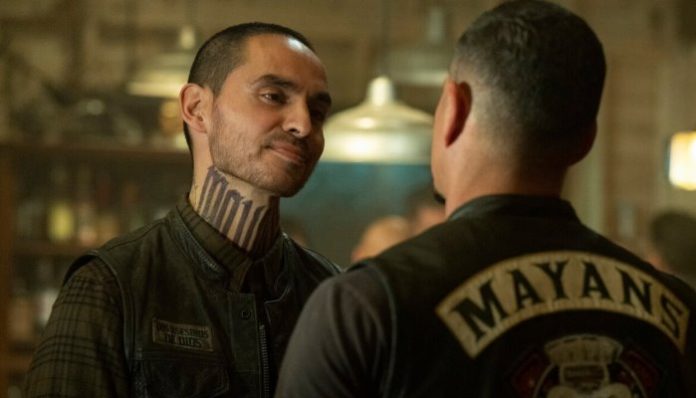 Mayans MC Season 5 Release Date: Will There Be Another Season of the FX Show?

Mayans MC Season 5 Release Date: Will There Be Another Season of the Sons of Anarchy Spinoff? When will Season 5 premiere on FX and Hulu?

The fourth season of Mayans MC concluded on FX on June 14, 2022, but it is not the end of the series. The Sons of Anarchy spinoff that follows Ezekiel “EZ” Reyes and the Santo Padre Charter of the Mayans Motorcycle Club will be back for Season 5 or even more. Showrunner Elgin James said this isn’t the end for series.

“We know where it ends. I know the very last shot. It’s not in Season 4,” he said to Variety. “So I’m just going to say there at least has to be one more [season]. But we know exactly where it ends, and we have been headed there for a while now.”

Will there be MC Mayans Season 5?

Though FX hasn’t revived the series for the fifth season, fans are assured that the network would soon announce the next season. Mayans MC Season 4 fared quite well in terms of rating, which might give fans hope that the show will be renewed for Season 5.

FX has always renewed the show quite late compared to its other shows like Snowfall and Fargo. The announcement about the Season 4 renewal came on May 3, 2021, the day before the penultimate episode of the third season aired. Likewise, Season 3, was renewed on November 4, 2019, the day before the second season finale aired.

All four of the shows above have already been renewed for another season. In fact, What We Do in the Shadows, with lower ratings than Mayans MC has also been renewed.

TV Ratings is one of the major factors considered before renewing any show. However, it is not the only factor. Shows’ popularity on streaming platforms is also a key factor considered while renewing.

TV ratings and streaming numbers are in favor of Mayans MC. Moreover, the series has a strong fanbase backing it, not only in the US but in other countries as well. The showrunner and actors look confident about the future of the series.

On The Playlist podcast, actor Clayton Cardenas who plays Angel Reyes also hinted that there is a lot to come and the whole story has already been planned. He said: “I think as storytellers, specifically with ‘Mayans,’ we know where this ends… I think we know where this ending is, and we know the perfect time to end is when the audience wants more.”

The season 5 premiere date depends on when FX renews the series. Mayans MC has generally taken around 10 months to air new seasons after the announcement. So, if FX renews the show in July 2022, we could get Season 5 in May or June 2023.

We will update this post as more Mayans MC Season 5 details get available. You can watch the previous four seasons on Hulu (in the US), Disney Plus (the UK), and Disney + Hotstar (India).