Is Racism an Issue for Fashion?

After years of systemic discrimination and cases of cultural appropriation, the fashion industry is yet to truly confront the issue of racism.

When it comes to addressing issues of race, the fashion industry has struggled.

Cultural appropriation, racist blunders and the lack of runway diversity are key talking points, which have led to a rise in diversity and inclusion schemes.

For the most part, the fashion industry does not shy away from engaging in controversies.

We look at racism and if it is an issue in fashion.

In 2008, Vogue was slammed by critics after they featured basketball star LeBron James on its cover alongside supermodel Gisele Bundchen.

The magazine cover sparked discussion and led to many accusing Vogue of perpetuating racial stereotypes.

LeBron James was depicted as the ‘dangerous black man’ running off with a ‘beautiful white woman’.

Rogers Cadenhead, a SportsFilter blogger, discovered a World War I recruitment poster from 1917 which justified the outrage of the racial stereotypes showcased by the Vogue cover.

At the time, LeBron James was the first black man to grace the cover of Vogue.

This was not the first incident that affected Vogue. The magazine has had many controversial covers over the years.

Also in 2008, Vogue Italia released ‘A Black Issue’ in which the magazine selected a few black models to appear on its pages.

The magazine began the conversation about diversity, which has been long overdue in the fashion industry.

However, it received mixed reviews, with many accusing the publication of tokenism.

After 34 years as a successful runway model, Naomi Campbell has spoken about racism in the fashion and beauty industry.

The lack of diversity in the fashion industry, both in front and behind the camera, was prevalent during the supermodel’s career. 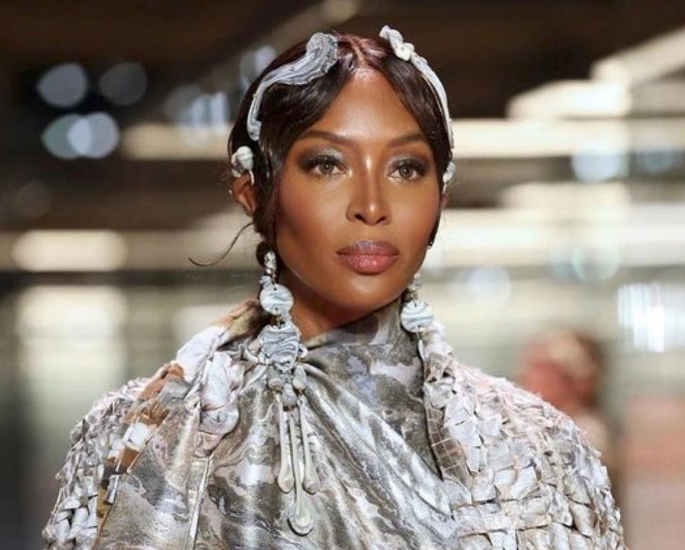 Naomi spoke about the many upsetting situations she faced early in her career.

The model said: “I remember showing up to one job in Italy and basically the make-up artist said to me: “Oh we didn’t know you were black.”

“He didn’t have the foundation for me. He had to mix some colours and make up my colour.

“And that consisted of a lot of greys. And I remember when that cover came out I just cried.”

“I wanted so much to be on the cover of this publication, it was Italian Vogue, but I didn’t want to be grey.

“I went through that for many, many years.”

Naomi has attempted to change racism in the fashion industry with her Diversity Coalition that she created in 2013 with fellow model Bethann Hardison.

Naomi said: “Bethann and I started the Diversity Coalition together and we’ve done the rounds in our business, speaking to designers.

“Yes, that did change things and it got better.

“I’ve always said for many, many years, we are not a trend. It’s wonderful that everyone is finally speaking out.”

More recently, the killing of George Floyd in May 2020 and the international protests that followed led to many social media users posting in support of the hashtag #BlackLivesMatter (BLM).

But netizens were quick to call some fashion brands out for their discriminatory practices.

Netizens questioned whether the luxury fashion brand Salvatore Ferragamo could be an ally in the BLM movement when actor Tommy Dorfman accused them of discriminating against models of colour.

LA fashion label Reformation was similarly called out after people, who claimed to be former employees, accused the brand of workplace racism.

The founder of Reformation, Yael Aflalo, issued an apology and immediately resigned from her role as chief executive officer.

Anthropologie’s allegiance to the movement was also questioned as the brand was accused of racially profiling its customers.

As well as fashion brands, many fashion publications faced backlash.

In June 2020, an investigation headed by CNN uncovered numerous allegations of racism and workplace discrimination at Refinery29.

In a statement, the editor-in-chief and co-founder Christene Barberich, who resigned on June 8, 2020, said:

“My goal has always been to help close the representation gap and I believe that is reflected across the pages of Refinery29.”

Meanwhile, Anna Winter was briefly rumoured to be stepping down from her artistic director and editor-in-chief position at Vogue, as former employees shared their experiences with racism at the magazine.

“I know Vogue has not found enough ways to elevate and give space to Black editors, writers, photographers, designers and other creators.

“We have made mistakes too, publishing images or stories that have been hurtful or intolerant.”

Additionally, a spokesperson for Vogue’s publisher Conde Nast issued a statement and said:

“Condé Nast is focused on creating meaningful, sustainable change and continues to implement an inclusive hiring process to ensure that a diverse range of candidates is considered for all open positions.”

Hollywood stylist Jason Bolden called out French luxury brand Celine after they posted a black square on Instagram with the caption:

“Celine stands against all forms of discrimination, oppression and racism.

“Tomorrow’s world will not exist without equality for all #BlackLivesMatter.”

Jason, whose celebrity clients include Taraji P Henson, Ava DuVernay and Serena Williams, accused the fashion brand of not dressing Black celebrities for the red carpet unless they were working with White stylists.

Jason later spoke of the incident and said:

“My focus has not been on fashion; my focus has been on lives being lost and the injustice facing Black people.

“But in that particular moment when I saw that go across my feed, it just sparked my rage.

“It just felt like a joke to me. It didn’t feel authentic.”

In February 2019, Gucci was forced to apologise for creating and releasing a controversial ‘blackface’ sweater.

In a tweet, Gucci issued a statement that read:

“Gucci deeply apologises for the offence caused by the wool balaclava jumper.

“We can confirm that the item had been immediately removed from our online store and all physical stores.

“We consider diversity to be a fundamental value to be fully upheld, respected, and at the forefront of every decision we make.

“We are fully committed to increasing diversity throughout our organisation and turning this incident into a powerful learning moment for the Gucci team and beyond.” 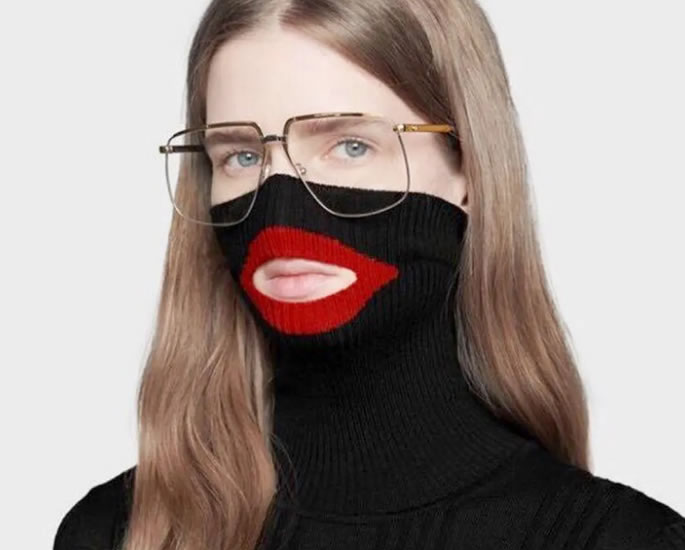 The $890 sweater featured a turtleneck collar and a partial balaclava with red lips, which many heavily protested against on Twitter.

The brand promptly removed the sweater from its online and physical stores and issued an apology after receiving backlash.

“This is a huge deal. The content on that sweater is racist. I can’t believe I’m even having to discuss this.”

Twitter users were not the only people who felt angry with the brand; celebrities like TI and Soulja Boy publicly abandoned their ties to Gucci.

Some chose to display their anger differently.

50 Cent posted a video on Instagram where he set a Gucci t-shirt on fire.

The Instagram video was captioned with “I gotta get rid of all the Gucci I have at home. I’m not supporting their brand anymore”.

This is not the first time Gucci has faced criticism for releasing insensitive clothing items.

In 2018, the brand came under fire for designing headwear that resembled a Sikh turban. 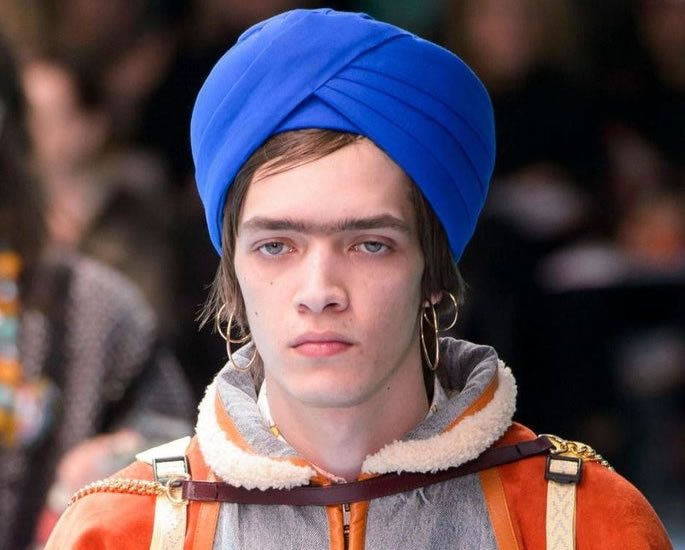 Gucci failed to adequately respond, and Twitter users were shocked as they discovered the headwear was still available to purchase from the Nordstrom website.

One Twitter user asked the designer why it could not have found a “brown model” to showcase the look on the runway.

Another, who identified as Sikh, called the headpiece “a huge sign of disrespect and disregard towards Sikhism”.

Fashion brands are not entirely to blame for the fashion industry’s poor reputation in regards to racism.

In 2016, Beyonce was slammed by netizens for cultural appropriation as she appeared in the music video for Coldplay’s ‘Hymn For The Weekend’ wearing traditional Desi clothing.

Whilst some defended the singer and claimed she was showcasing a positive image of India, many netizens found it offensive.

Beyonce is not the first star to be accused of cultural appropriation, with Rihanna being heavily criticised for posting a topless photo of herself whilst wearing a necklace featuring Ganesha. 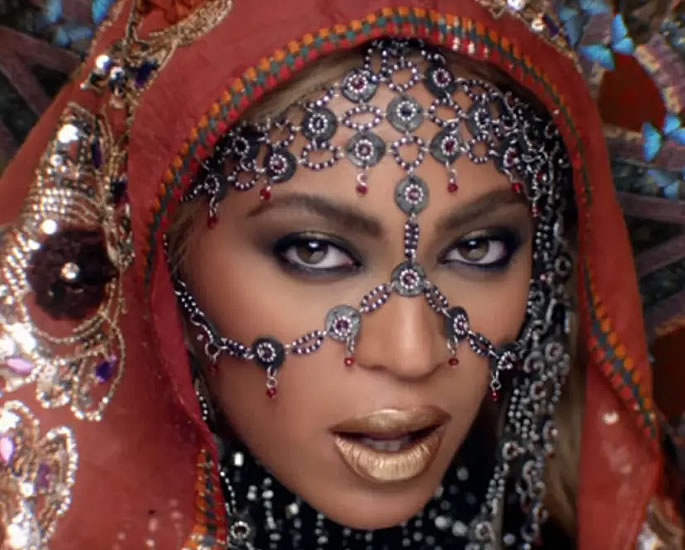 Selena Gomez similarly faced backlash for wearing a bindi and including Indian classical music in her song ‘Come And Get It’.

The singer was forced to make an apology after she received backlash from Indian fans who called the song “insensitive”.

It is clear to see that the fashion industry has benefited from deep-rooted prejudices that are embedded within the system.

Many fashion houses, publications and brands are increasingly relying on inclusion schemes to diversify their staff and to avoid situations that would otherwise have them cancelled.

For companies like Gucci and Vogue to redeem themselves, a diverse team of people is required in-house to ensure the company is a multicultural and inclusive marketplace.

Fashion companies are no longer in control of merely making items.

The fashion industry is one of the most influential industries and it must use its platform in a responsible manner.

The only thing that fashion brands earn from controversies is that they are provided with the opportunity to learn from their mistakes and must try their best to not repeat them.