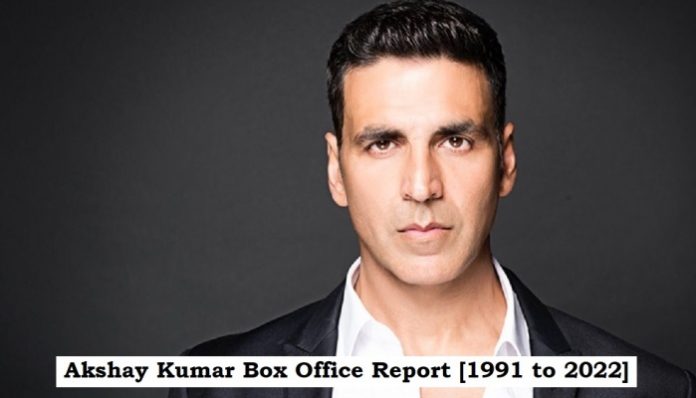 Akshay Kumar is one of the biggest superstars in the country. In a career span of 29 years, he has worked in every type of movie, action, comedy, drama, or romance. He is unarguably the most versatile and energetic actor in Bollywood. From Saugandh in 1991 to Samrat Prithviraj in 2022, the actor has worked in as many as 126 movies, far more than Salman Khan, SRK, Aamir Khan, and Ajay Devgn.

Fondly named Khiladi Kumar, Akshay is going through a rough phase of his career. His movies are breaking records at the Box Office. His last two movies Bachchan Pandey and Samrat Prithviraj have tanked at the box office.

Akshay has been inconsistent as far as the box office performance of his movies is concerned. From 1997 to 1999, he delivered five consecutive flops. From 2006 to 2008, he delivered six consecutive hits. Akshay has delivered fifteen 100 crore movies, the most by a Bollywood actor. Let’s have a look at Akshay Kumar’s box office collection report since his debut in 1991.

Our remarks: Akshay has been inconsistent throughout his career. In his early career days, he was a flop star as most of his movies used to tank at the box office. However, he significantly improved his box office record from 2007 to 2019. Once again, he is going through a lean phase as his movies are not earning much at the box office.

Akshay Kumar is the most active actor in the industry. He is consistently delivering 3 to 4 movies in a year. His upcoming movies include biggies like

What are your views on Akshay Kumar’s box office collection report card? Share your thoughts with us in the comments section. Keep following us as we are coming up with more Box Office analyses and reports.

Box Office Report Of Other Actors