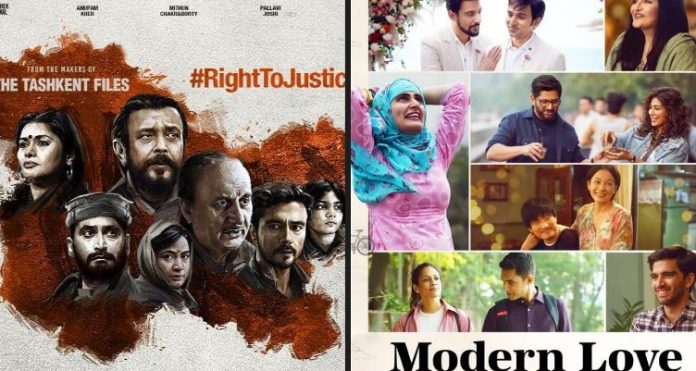 Top 5 Movies & Shows Releasing on OTT on May 13, 2002: Modern Love Mumbai, The Kashmir Files and More

So, we are heading for an exciting weekend as some pretty interesting content is lined up to release on OTT. It’s Friday and we cinema lovers are excited. It’s time to finally binge movies and shows that were released throughout the week. If it isn’t enough, we have compiled the list of exciting movies and shows releasing on OTT on May 13, 2022. have a look.

Modern Love: Mumbai is an anthology series directed by filmmakers Shonali Bose, Hanal Mehta, Vishal Bhardwaj, Alankrita Shrivastava, Dhruv Sehgal, and Nupur Asthana. It is the first of the three Indian adaptations of the hit US anthology of the same name. The two others are Modern Love: Chennai and Modern Love: Hyderabad.

This isn’t a movie but a new drama series based on the Michael Connelly book, The Brass Verdict. It was previously adapted in the 2013 Lionsgate movie starring Matthew McConaughey. The series stars Manuel Garcia-Rulfo, Neve Campbell, Becki Newton, and azz Raycole.

The summary of the series reads:

“Sidelined after an accident, hotshot Los Angeles lawyer Mickey Haller restarts his career — and his trademark Lincoln — when he takes on a murder case.”

Must See: Movies releasing in theatres in May 2022

The biggest Bollywood blockbuster of the year, The Kashmir Files, will make its OTT debut on Zee5 on May 13. The movie presents a storyline centred around an exodus of Kashmiri Hindus in Kashmir. The Kashmir Files stars Mithun Chakraborty, Anupam Kher, Darshan Kumar, and Pallavi Joshi.

Senior Year is a comedy movie that revolves around a high-school cheerleader who falls into a coma when a stunt goes wrong. Twenty years later, she’s 37, newly awake, she wants to return to high school to reclaim her status and become prom queen.

The Kids in the Hall

The Kids in the Hall is a Canadian sketch comedy TV series that aired for five seasons from 1988 to 1995. It featured the comedy troupe The Kids in the Hall. Now, the series is returning to Amazon Prime Video in an 8-episode run, which will be a continuation of the original show.

The Essex Serpent is a period drama series based on the novel of the same name by  Sarah Perry.  The series follows London widow Cora Seaborne (Claire Danes) who moves to Essex to investigate reports of a mythical serpent. She forms a surprising bond of science and scepticism with the local pastor (Tom Hiddleston), but when tragedy strikes, locals accuse her of attracting the creature.

All movies and shows releasing on Netflix, Amazon Prime Video, and other OTT platforms on May 13, 2022.

So, these are the OTT releases of May 13, 2022. Which of these will you binge watch on the upcoming weekend? Share your views with us in the comments section.