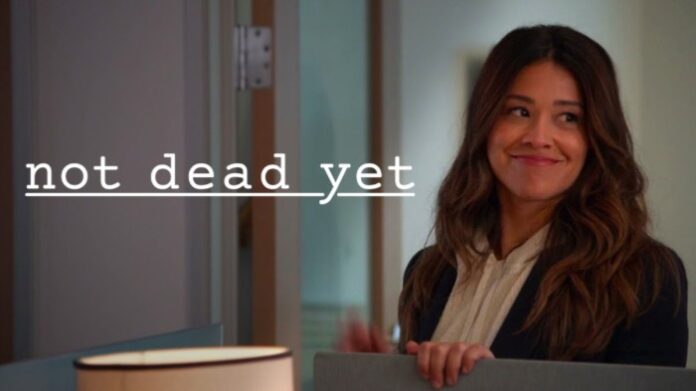 Not Dead Yet: The Upcoming Comedy Series Got A Green Light From ABC!

Not Dead Yet is an upcoming ABC comedy series created and produced by David Windsor and Casey Johnson. The comedic pilot will be based on Alexandra Potter’s book Confessions of a Forty-Something F**k Up, which was released in 2020. Not Dead Yet is one of the most recent announced series, which has received a lot of attention.

Recently, ABC stated that the new show would be part of the network’s midseason lineup in the coming years. The series, on the other hand, appears to have a fascinating plot with star-studded cast members, which has attracted fans’ interest.

When will Not Dead Yet be released? What does the upcoming series have in store? Who is the cast? Well, in order to find out, keep reading.

Not Dead Yet Release Date

Not Dead Yet‘s official Twitter account confirmed the news that the series is officially in development at ABC and will begin production soon. Therefore, we do not yet have a precise premiere date.

However, ABC stated that the new show would be part of the network’s midseason lineup for the 2022-2023 broadcast season. That suggests we could see the series between January and March 2023 or maybe earlier. Since the announcement, fans have been looking forward to the release and have raised their expectations for the series.

Not Dead Yet Plot

The story of Not Dead Yet will follow the recently divorced Nell Stevens as she makes an effort to start over in her life. The former successful journalist, who long ago gave up on her goals to support her fiancé in starting his business, is left behind when her relationship ends. Nell, who is now broke and feels rather elderly, returns to Pasadena, her birthplace. Nell accepts the only job she can find writing obituaries.

Because she must share an apartment with a stranger who keeps an eye on her recycling and electricity usage, she struggles to find other work. Nell discovers she can now see ghosts, which at first seems like a setback, but it actually pushes her life on a new path.

Who’s in the cast of Not Dead Yet?

Only this little part of the cast has been revealed so far. However, as the release date approaches, the producers will reveal much more information regarding the cast and everything. Therefore, stay tuned as the release of the series is rapidly approaching.

On May 17, 2022, the official teaser for 15 seconds was revealed, leaving fans with gaping mouths as those 15 seconds sparked a lot of anticipation for the release.

You can check out the teaser below:

The excitement among fans indicates that, despite the premiere date not being that close, there are great expectations for the series. Therefore, the onus is on the creators as it is evident that they don’t want to let the public down.