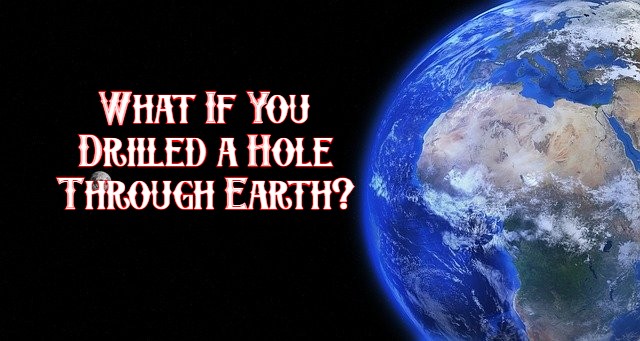 What If You Drilled a Hole Through Earth?

What If You Drilled a Hole Through Earth?

What if you drilled a hole through the earth? do you know what might be the best way to travel to the other side of the world by drilling your way right through the planet? This will be the journey of a lifetime if you don’t mind riding through molten rock and crushing pressure. What would you see along the way? How long would this journey through Earth take, and how would a gravity train keep you alive? The heat is on, and you’re under all sorts of pressure. This is what if, and here’s what would happen if you drilled a hole through Earth.

Imagine going from Argentina to China in less than an hour; all you need is a hole straight through the Earth, but drilling this hole would be the hardest part of the endeavour. You could handle it supervillain style and fire a laser at Earth. But today, we’ll be taking a trip through the biggest hole we’ve drilled in the history of our planet. Sit tight because this is going to be one heck of a ride. The first thing you’d need to do would be to drill the deepest hole humanity has ever imagined.

We’ve already drilled holes through the earth on what-ifs, so you know what to do. First, you’d need a really big drill, and it would take a few years to complete this project. You’d be working in enormous heat and pressure, and it would increase the closer you get to Earth’s centre. But when the hole is finished, you’d have your very own gravity tunnel, a gateway between one side of the earth and the other. I’ll explain how it would work in a moment.

Next, you’d need to find yourself a comfy vehicle to get you through the Earth. If you just jumped into the depths of the earth, burned to a crisp and crushed into a pancake. So upon the gravity train, this train would accelerate, using only the force of gravity, and it would protect you from the searing heat and extreme pressure. The first leg of the journey would take you through Earth’s crust, depending on where you begin your trip.

The crust can be five to 70 kilometres thick, and amazingly, it only makes up one per cent of the entire earth. You’d start your journey feeling pretty carefree, and at 20 meters below the surface, you’d be at the same level as subways or the Paris catacombs. But let’s go a little further down at two and a half kilometres. We’d be at the same depth as the deepest fossil ever discovered. And once you get to three-point six kilometres, you’d be able to see the devil worm.

It’s the deepest living animal ever found. Is it just me, or is it getting hot? Believe it or not, some people are working at this depth. The winning gold mine in South Africa is so far down that the heat is an issue. And believe me, you wouldn’t enjoy the 60 degrees Celsius temperature down here. Then gravity would take you further down at eight point eight kilometres below the Earth’s surface. You’d have travelled further than the height of Mount Everest, and at 11 kilometres underground, you’d be deeper than the Mariana Trench.

At twelve point to six kilometres, you would reach the same depth as the kola superdeep borehole. It’s the deepest hole we’ve ever dug. And now you’d really feel the intense pressure on your body at this depth. Air pressure is 4000 times the pressure at sea level. As you approach the end of the first part of this epic journey, you might get to see a plethora of gems. I’m talking about rubies, sapphires and emeralds. They could be valuable souvenirs if you make it through to the other side of the earth.

And at 40 kilometres down, part one of your voyage would be behind you or above you. Depending on how you see it, let’s go onward to the second layer of earth, the mantle, most people think it has a lava-like texture, but at this shallow depth, relatively speaking, it’s rock solid. Only when you’re deeper will it start becoming molten. This would be the longest part of your journey. That’s because the mantle makes up an impressive 84 per cent of Earth’s volume.

The mantle is about twenty-nine hundred kilometres thick. You wouldn’t see much inside it, except for one dazzling exception at this depth, the enormous pressure and heat forms diamonds. They make their way to the Earth’s surface through volcanic activity, and that’s where we humans find them. But you are lucky and find them at their birthplace. Don’t be shy. Grab a few. As you arrive about four and ten kilometres below the surface, things would start to get weird.

The mantels rock would be molten hot, but instead of staying in its melted state, the metal would turn hard. That’s because of the extreme pressure moving on to the bottom of the mantle, a mere 1000 kilometres down, you would experience the force of mantle blobs. These are supercharged plumes of hot rock, and if they surface, they will become devastating supervolcanoes. No need to say you’d feel extremely hot. You’d be almost halfway through the earth.

And that must mean you’re approaching the outer core at depths of three thousand kilometres. The outer core is made of iron and nickel. And boy, would it be hot. The temperatures around you would range from forty-five hundred to fifty-five hundred degrees Celsius at five thousand kilometres below the surface; you’d reach the Earth’s inner core. This giant solid iron sphere has a mind-boggling temperature of 50 200 degrees Celsius, and the pressure is a crushing three point six million times more than at sea level.

Let’s hope your gravity train would be up to the challenge at these extreme temperatures and pressures. I didn’t read the manual, but I’m sure you’ll be just fine. Finally, you would make it to the halfway point of your subterranean voyage right at the centre of Earth. The mass would be equal in all directions, and you’d get to experience zero gravity. But remember, that was just half the journey. You’ll have to do that all over again, but in reverse, to finish your trip.

But as I mentioned before, travelling through the Earth would be the easy part. It’s the drilling that would be hard. If we could engineer such a feat, it would revolutionize travel, and you’d have one short but the epic journey. But what if that hole through Earth was bigger? What if Earth were shaped like a doughnut? Well, as always, I’ll leave that story for another.