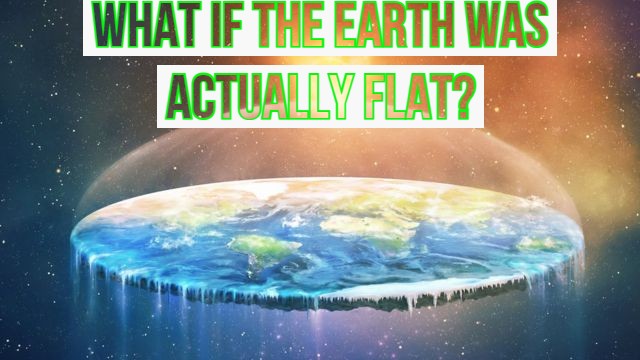 What If the Earth Was Actually Flat?

What If the Earth Was Actually Flat? a flat earth solar eclipse diagonally growing tree. The Great Wall of ice guarded by NASA, of course, the flat earth there sure has a great imagination. But what if they were right? How would the earth hold up in space? Would it revolve around the sun or would the sun rotate around it, and why would you never walk to the Earth’s edge?

This is what if and here’s what would happen if the earth was flat, in case you missed the news on the flat Earth channel. For thousands of years, the general public thought that the earth was flat and everything revolved around it. Then Nicolaus Copernicus came around with his spanking new theory. The theory said that the earth wasn’t flat and definitely not the centre of anything. His observations led him to believe that our planet is orbiting the sun.

But here we are five hundred years later and some people around the globe are convinced that the earth is flat. Well, how would this even work? Do you know why the planets form in a spherical shape? One word gravity. Gravity is what’s pulling matter together equally from every side and as a result, matter forms into a sphere. Of course, this wouldn’t be the case for flat earth.

I don’t need to tell you that you can’t increase the speed forever. At some point, you’d be going too fast. Does anybody feel like a burnt pancake? No. If you want some real science, then, yes, there would be gravity on a flat earth and it would be weird. The centre of gravity on a flat earth would be right here in the middle. Everything on Earth and around would be pulled to this point. And the further you got away from the centre, the stronger this pole would be. At some point, it would begin to pull you downward.

So, you would have to start climbing. This would be the reason why you couldn’t walk to the edge of a flat earth. Gravity would be so strong around there that it would be impossible for you to make it. You might never see that gorgeous forty-five-meter-tall wall of ice called Antarctica guardrail in the earth’s edge. And you’d never learn what’s on the flip side, but at least you wouldn’t fall off of it. There would be other side effects of this funny gravity.

Objects closer to the edge of the earth would fall sideways instead of down. Gravity would also make trees grow diagonally on most of the pancake-like Earth because they’d be reaching against the pull of gravity. All the rain, snow and hail would fall toward the Arctic at the centre of the earth, the precipitation would converge and start to build up. The oceans would get sucked to the centre of the disk, too, and formed one big ocean in the middle.

A big concern would be the air pressure on an earth gravity would draw too much air toward the earth’s centre, leaving the areas around the edge with no air pressure at all. That would be bad because people living on a flat earth, Australia, wouldn’t have enough oxygen to breathe. And if you lived closer to the middle where the Arctic would be, you’d be crushed by the weight of the atmosphere.

But not for long. Earth wouldn’t have a geomagnetic field around it. This field is generated by the movements of the Earth’s core and, well, flat earth just wouldn’t have one. Nothing would be holding our atmosphere in place and eventually it would spill into space. We’d be exposed to solar radiation that would cause cancer and damage our DNA and we’d have no breathable air anywhere on the planet. So, I hope you’re able to find a life support system lying around.

Now, let’s get to those questions we’ve all been waiting for. What would orbit what in this arrangement? Would there be a day and night cycle or time zones for every flat earth, or know that the sun goes in circles around pancake-shaped earth and so does the moon. They’re both around 50 kilometres in diameter and act like huge spotlights. But let’s bring good old science to the equation. If the sun worked as a spotlight, you’d see it from everywhere on Earth.

Even if it didn’t shine directly on you, it would look like those alien abduction scenes. I wonder where they got that idea from. In this system, there would be no day and night cycle that would be pretty strange. Am I supposed to get my beauty sleep OK? I know how to fix this. Yeah, that’s better. For flat earth to have days alternating with nights, the Sun would have to orbit the planet this way.

When the sun was up, the entire planet of Earth would experience daylight. And when the sun went down, the earth would fall into nighttime. There would be no time zones and no seasons either. But you could still mess up your schedule by staying up late and watching whatever videos. You’d be lucky if the sun was so much smaller than the Earth. Sort of. Think of this if the son retains its gigantic form as it was orbiting flat earth, it would burn down the entire planet. That’s because of how close it would get to us.

On the other hand, if the sun were much smaller than it really is, we’d freeze to death. That’s because the flat earth would have nearly two and a half times the surface area of our round earth. We’d be getting only one-third of a regular-sized sun’s energy. That’s not enough for life on flat earth to exist. And we haven’t even talked about this yet.

Flat Earth disciples believe in some kind of a. moon that’s responsible for these on our round earth, lunar eclipses happen when the earth lines up between the sun and the moon. If that was the case for a flat earth, this is how those eclipses might look, and even that would require some very special alignment. So, if the flat earth conspiracy turned out to be true, that our globe was indeed Photoshopped and GPS devices were rigged for some financial gain.

Well, that would open up a conversation to other conspiracy theories. Unfortunately, many people, including the flat earth years, are living in a state of cognitive dissonance. That’s when their thoughts and beliefs aren’t quite consistent and don’t always represent reality.