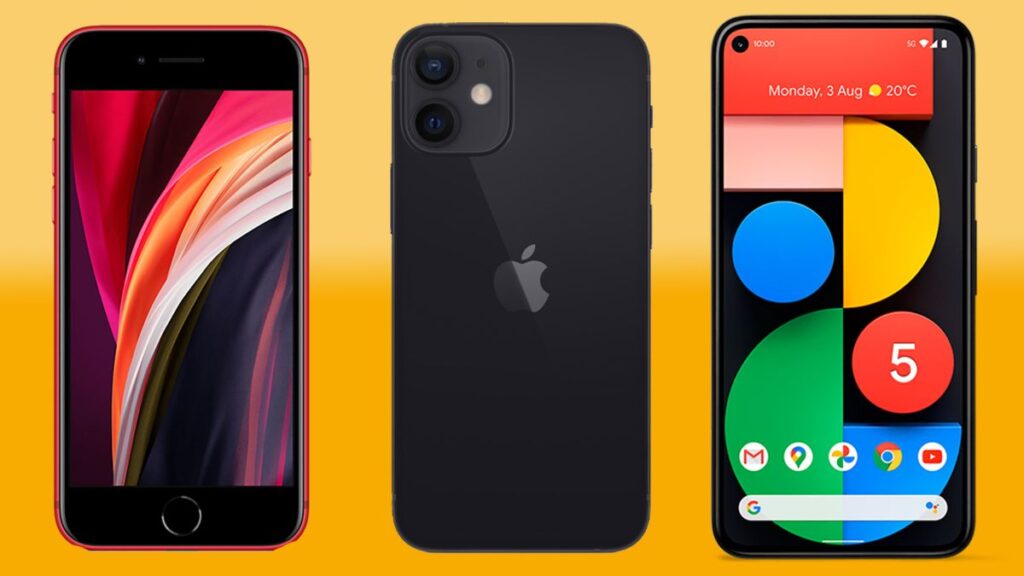 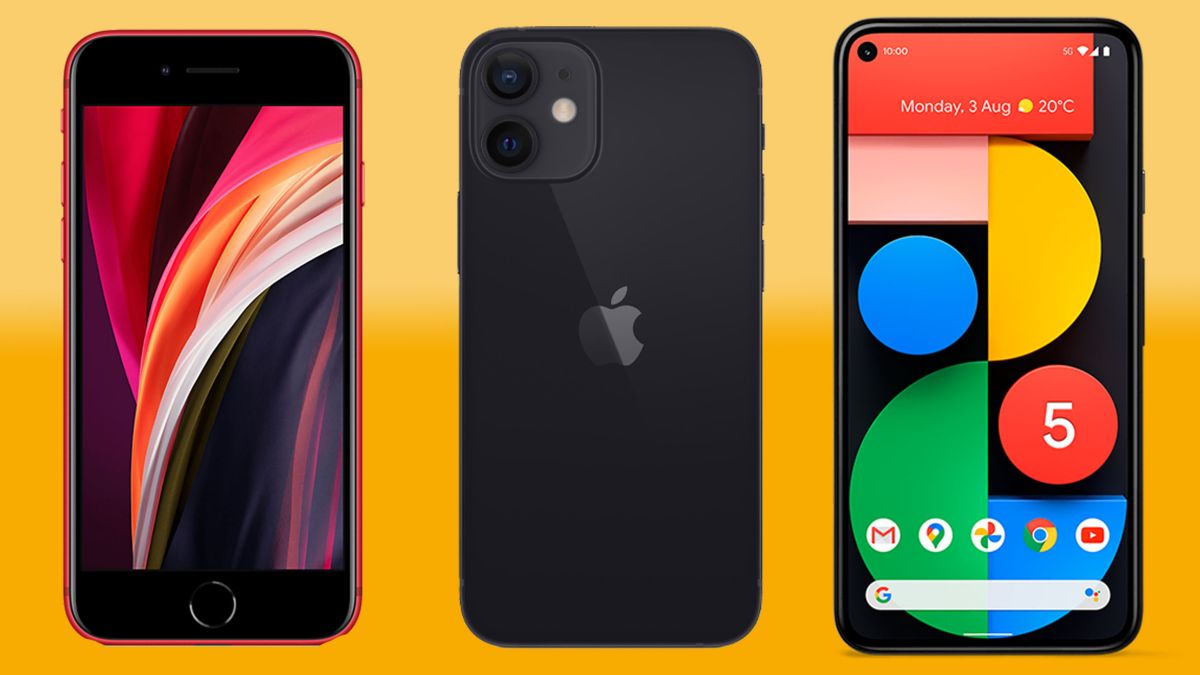 If you’re looking for the best small phone, you might feel like your options are quite limited. That mostly depends on what you consider to be a small phone. Once, there was a time when small smartphones were common or even the norm, but now we’re in the age of increasingly large handsets.

Because of that, not as many small phones are released, and our idea of what even constitutes a compact phone has changed. For the purposes of this article, we’re considering any phone with a screen size of 6-inches or below to be small.

If you’ve got an older smartphone, that may sound a bit big to you, but compared to the 6.8-inch Samsung Galaxy S21 Ultra and the 6.7-inch iPhone 12 Pro Max, these phones are definitely on the small side. For those who want something significantly smaller, there are still some options, such as the 4.7-inch iPhone SE (2020).

Below, you’ll find a range of the best small phones including the iPhone SE (2020), right up to the likes of the Google Pixel 5 at the 6-inch end. They’re all a lot more compact and easier to use with one hand than typical smartphones.

The best small phone around

The iPhone 12 mini is that rare thing – a phone that’s not only genuinely small, but also genuinely high-end. As the name suggests, it’s basically the iPhone 12 in a smaller size, with a 5.4-inch 1080 x 2340 OLED screen.

That’s a high-quality display, and while it’s bigger than the screen on the iPhone SE (2020), the relative lack of bezels means the iPhone 12 mini is actually a smaller phone overall.

Beyond the screen and the size, highlights of the iPhone 12 mini include its 5G support, its MagSafe tech which lets you magnetically attach accessories, and its top-tier power, provided by an A14 Bionic chipset (the same one as you’ll find in the rest of the iPhone 12 range).

The camera is highly capable too, albeit only packing two rear lenses – you get a 12MP main and 12MP ultra-wide shooter, so it lacks for telephoto skills.

We’d like to have seen slightly better battery life, and the 64GB starting size is entirely too low, especially for the price, but those niggles aside the iPhone 12 mini is a superb small phone.

The choice for those who want a cheaper iPhone

+Low price for an iPhone+Lightweight frame

The iPhone SE (2020) is Apple’s budget iPhone, but it’s also one of the company’s smallest available models. In fact, at 4.7 inches its screen is the smallest (as well as being smaller than almost any other widely available smartphone), but as noted above the actual dimensions are slightly larger than the iPhone 12 mini’s.

Still, the iPhone SE (2020) is undeniably a small phone, and it’s a very good one at that. While it can’t quite match the iPhone 12 range for power, it’s not far off, packing the A13 Bionic chipset that’s also found in the iPhone 11 range.

The handset has a decent – albeit single-lens – 12MP camera too, and a premium (read: metal and glass) if slightly old-fashioned design.

Some of this might sound like faint praise, but this is one of the most affordable and arguably best value iPhones we’ve seen in years, and it just so happens to be compact too.

The best Pixel phone out there right now for most users

With its 6.0-inch screen the Google Pixel 5 only just squeezes onto this list, but its tiny bezels means there’s no wasted space, and the screen itself impresses. It’s a 1080 x 2340 OLED one with a 90Hz refresh rate, which leaves it feeling smoother than a typical 60Hz phone.

The Pixel 5 also has a high-end and slightly unusual design, as it has a metal rear where most phones use glass or plastic. This helps it stand out, and that’s a good thing in our view.

The camera experience really shines here too, as is usual with Google phones. There’s just a dual-lens snapper on the back, with a 12.2MP main and 16MP ultra-wide included, but the pictures taken mostly come out well, other than a bit of noise in low light, and the phone is also packed full of easy-to-use image editing tools.

There’s perhaps less power here than you might expect from the top 2020 Pixel, as it has just an upper mid-range Snapdragon 765G chipset, but the Pixel 5 is priced accordingly, and still has 8GB of RAM and 5G.

A budget take on the Pixel 4

The Google Pixel 4a is Google’s rival to the iPhone 12 mini, though at 5.81 inches the Pixel’s screen is quite a bit bigger.

It’s still small though, and there’s a lot to like here – including that display, which uses OLED tech and at 1080 x 2340 is fairly sharp.

For the money we were also very impressed with the camera, as while there’s just a 12.2MP single-lens one on the back (and an 8MP one on the front) it performs well, with good image processing and decent results even in low light.

The Google Pixel 4a also has a headphone jack, which is an increasingly rare feature in phones, and its software is a definite strength, as it runs stock Android, which is more intuitive than many manufacturer overlays. As this is a Google phone you can also expect a day one update to the next software version.

Its power, battery life, and build are all middling, but then this comes in at a middling price, so that’s forgivable. Note also that we’re just talking about the standard Pixel 4a here, not the Pixel 4a 5G, which is slightly too big to make this list.

A cheap ticket to widescreen media

That screen is slightly unusual too, as it has a 21:9 aspect ratio, which makes it tall and narrow – that’s great for landscape content, and especially movies, but less ideal for portrait content. The screen sports vivid colors too, and there’s no notch to get in the way of the action.

We’re also fans of the Xperia 10 II’s understated, symmetrical design. And understated perhaps sums this phone up, because it’s not flashy, or the best at anything, but it’s a solid all-rounder that excels for viewing videos, and has no major issues.

The camera is slightly sluggish and the chipset is middling, but neither aspect is actively bad, and the phone overall feels robust and useable.

+Superb camera for price+Easy to use in one hand

-No in-screen scanner-Thicker than the S10

The Samsung Galaxy S10e is getting on a bit now, but if you want a compact Galaxy S phone this remains your best option.

As a member of the S range it’s reasonably high-end, with either 6GB or 8GB of RAM and an Exynos 9820 or Snapdragon 855 chipset. Which chipset you get depends on where you are in the world, but both rank among the best of this phone’s release year (2019).

The Samsung Galaxy S10e also has a 5.8-inch 1080 x 2280 AMOLED screen, which we found to offer bright colors and crisp detail. And there’s an excellent dual-lens camera, including 12MP main and 16MP ultra-wide snappers, plus all-day battery life.

The Galaxy S10e even has a decent build, with a glass back, a metal frame, and water resistance. Sure, it lacks a few of the bells and whistles of the Samsung Galaxy S10 and Samsung Galaxy S10 Plus, and it’s no longer the newest phone on the block, but that just means it’s cheaper.

to the US, Canada, Mexico, China & Romania

Unlimited 2G after 25GB of 4G LTE data use