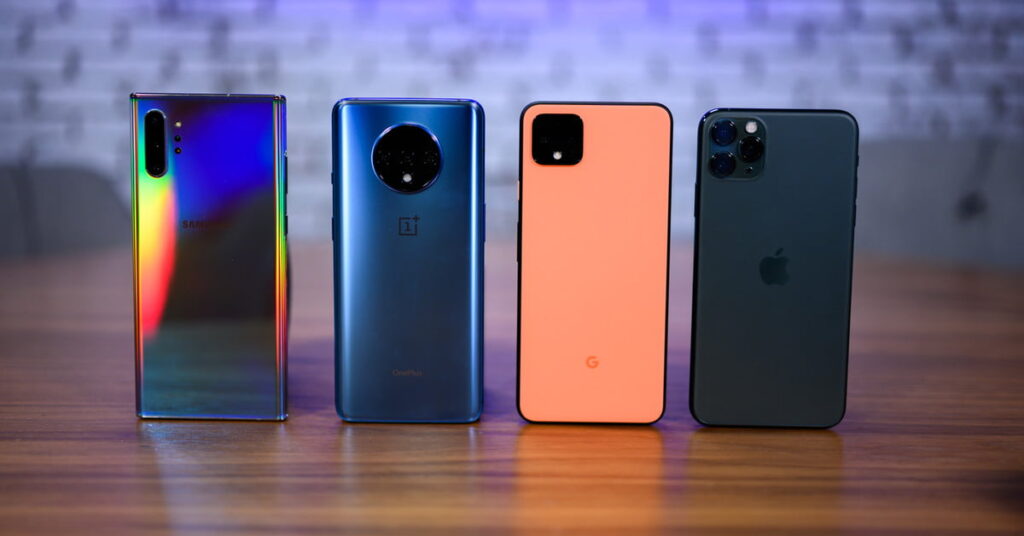 Smartphones don’t last forever, unfortunately, and while the best smartphones aren’t cheap, we can help you save some cash if it’s time for a new mobile. Below, we’ve gathered up all the best cheap smartphone deals available this week that cover all the bases including Google Pixel deals, Samsung Galaxy deals, iPhone deals, 5G phone deals, and other bargains.

These discounts can save you hundreds, so if you’ve got some cash left burning a hole in your pocket and you’re hungry for more, definitely check out these smartwatch deals as well.

Carrier offers usually require you to sign up for a specific service (usually an unlimited plan), trade in an old device, or port in your current number to get the best possible discount, and this is often the best way to score a deal on a brand-name smartphone — particularly just released newer models. That’s not always a viable option, however, so these smartphone deals also include some great unlocked devices that you can bring to a service provider of your choice:

More than ten years after their inception, Samsung’s Galaxy smartphones still command the lion’s share of the Android smartphone market and could arguably be considered Apple’s main competition worldwide (although Apple currently enjoys a larger market share in the U.S. than all Android phone brands combined). As you probably inferred from the name, the 2019 Galaxy S10 phones represent the tenth generation of Samsung’s main flagship line, but Samsung got in the spirit of 2020 when it rolled out the new S-series flagship — dubbed the Galaxy S20 — at its February Galaxy Unpacked event. The Galaxy family also features the Note smartphones that occupy kind of a weird space as alternative flagships featuring larger displays and included stylus pens, and we were more impressed with the new Note 20 and Note 20 Ultra than with the S-series devices. Samsung also recently revealed the unique Galaxy Z Flip, a new spin on the old flip-phone concept, along with the larger (almost iPad Mini-like when in use) Samsung Galaxy Fold.

As far as the new 2021 offerings go, the release strategy hasn’t changed much from last year with three next-generation Galaxy devices to choose from: The Galaxy S21, the larger Galaxy S21 Plus, and the premium Galaxy S21 Ultra (which is far and away our favorite of the bunch). They’re all solid phones as you’d expect, although the Samsung didn’t exactly re-invent the wheel. Your best bet when looking for a deal on new releases like these is to take advantage of the carrier offers below, but if you don’t mind last-gen stuff, you can also find great deals on carrier-unlocked models like the Galaxy S10, Note 10, and similar 2019 flagships.

The Apple iPhone is the device that brought smartphones into the limelight, and more than a decade later, the series is still going strong. We saw the release of not two, but three new models (an industry trend that has become the norm in recent years) in 2019 with the mid-range iPhone 11, the flagship iPhone 11 Pro, and the up-sized iPhone 11 Pro Max. For 2020, Apple actually released four new flagships — the iPhone 12, iPhone 12 Mini, iPhone 12 Pro, and iPhone 12 Pro Max, and Apple also recently brought back the iPhone SE, (with the second-gen SE representing a great mid-range flagship alternative similar to Google’s Pixel 3a). That makes five new Apple phones for 2020, giving you more options than ever if you’re after a new iPhone.

Unfortunately, Apple iPhone deals can be a little hard to find sometimes. Often, the best way to save hundreds is to either take advantage of a carrier sign-up offer or to simply buy refurbished, but savvy bargain-hunters can still find prepaid or unlocked iPhone deals on new and slightly older models if they look around. Now is an especially good time to look for deals on recently discontinued devices such as the iPhone XS and iPhone XS Max, which are great flagships from 2018 that are much cheaper now but not too dated for use as your everyday smartphone.

Sorting through LG’s flagship offerings can be a little confusing due to some odd naming conventions, but there’s no denying that this brand pumps out some very good Android smartphones. Not unlike Samsung, LG has two different flagship lines: The standard G-series devices and the premium V-series phones, both of which now bear LG’s “ThinQ” branding. In 2019, the company added three new devices to the G series stable, the LG G8 ThinQ (the successor to the 2018 G7 ThinQ), and the truly unique dual-screen ThinQ G8x, while the V series saw a refresh in the newer 5G-capable LG V50 ThinQ that succeeded the 2018 V35 ThinQ and V40 ThinQ. Even more recently, we saw the LG Velvet and dual-screen LG V60 ThinQ.

LG’s newest offerings didn’t excite us quite as much as others have, but they’re still solid Android devices and are worth it if you can find a good deal — which, with our help, you can. Carriers frequently offer discounts, rebates, and BOGO offers on these premium LG devices, but you can also find some nice unlocked smartphone deals sometimes, even on the latest models. And of course, if you want the best deal on a flagship you can still find new (and not used or refurbished), don’t turn up your nose on slightly older picks like the LG G7 ThinQ or the LG G6.

Google was late to the hardware game, but given that this software titan is the brain behind the Android operating system, it’s no surprise that its Pixel phones deliver what might be the best out-of-the-box Android experience to be found in a mobile device. In contrast to decade-old devices like the iPhone or Galaxy, Google’s Pixel devices are currently only in their fifth generation. The Pixel 4 and Pixel 4 XL were released last fall, bringing with them some notable improvements like fully metal-and-glass construction (ditching the partially plastic backside of previous models) along with a new three-lens camera module. These were followed by the shockingly cheap Pixel 4a and the new fifth-gen flagship, the Google Pixel 5.

These flagship smartphones are affordable compared to the competition, too (given that Apple and Samsung are now releasing flagships in the $1,000-plus range). Google’s staggered smartphone release strategy means that we may see a new Pixel 5a next spring, but for now, the sub-$400 Pixel 4a is the one to buy if you want one of these devices on the cheap. Also, while deals on the Pixel 5 might be scarce this early after its launch, the Pixel 4 and Pixel 4 XL are still worthy buys that can be had for deep discounts now.

Cellular service providers regularly offer enticing incentives to get you to switch to their LTE plans. Carrier offers are also often the best way to score deals on new flagships like the iPhone 12 and Samsung Galaxy S20. If you’re looking for a new carrier, you can save a good chunk of change and even score a free device by taking advantage of one of the many smartphone deals that are always available from Sprint, T-Mobile, Verizon, or AT&T, although note that these promotions are often given in the form of bill credits rather than regular discounts.

These carrier offers change all the time, but you can check out each service provider’s updated deal page right here:

We strive to help our readers find the best deals on quality products and services, and we choose what we cover carefully and independently. The prices, details, and availability of the products and deals in this post may be subject to change at anytime. Be sure to check that they are still in effect before making a purchase.

Digital Trends may earn commission on products purchased through our links, which supports the work we do for our readers.