Gaming laptops: too big, too expensive and too brash? Well, up to a point. These days you can pick up a pretty decent budget gaming laptop for around £1,000 that doesn’t weigh a ton, doesn’t look like a cast-off from a cheap sci-fi movie and makes a decent fist of even the most demanding AAA titles.

Here we round up five of the best that will let you game like a good-un without needing to get a second mortgage to buy it or hit the gym to carry the thing.

Before we look at the contenders it is worth asking what makes a decent gaming laptop.

READ NEXT: The best laptops for students

How to buy the best budget gaming laptop for you

A discrete GPU (graphics processing unit) is the obvious thing to look for, although the latest integrated Intel Iris Xe graphic chips no longer make that the absolute requirement it once was.

As long as you are prepared to knock back the display resolution in search of that magic 60fps frame rate, you can quite happily game on a laptop with integrated Iris XE Graphics.

A discrete GPU is still essential, however,  if you want to play AAA titles at smoother frame rates and higher levels of detail.

Which GPU is best?

As it stands, you won’t see anything other than Nvidia’s GPUs on gaming laptops so the choice will be between which series to opt for and which particular model to choose within that series.

RTX-series GPUs are the most powerful and can handle the latest RTX or Ray Tracing technology. The lesser GTX-series GPUs either can’t handle ray tracing or take a big performance hit, but tend to feature in more affordable machines.

Nvidia’s MX-series GPUs are sometimes found in hybrid productivity/gaming laptops but performance tends to be on a par with the best integrated graphics and won’t be for serious gamers.

What this boils down to is that you want to be looking at the following GPU series, which I’ve listed in descending performance order:

What about the RAM and CPU?

The CPU and amount of RAM is important, too, but with most games relying more heavily on the GPU than the CPU these days, it isn’t as critical as you might think. Typically, a budget gaming laptop can get away with 8GB of RAM and many favour cheaper CPUs over the more expensive, higher-performance units

Having said that, a more powerful CPU will make a difference if your gaming fix leans towards MMO titles or intensive strategy games such as Total War: Warhammer 2.

In this case, you want to look out for CPUs from the manufacturers’ high-performance series – normally denoted by an “H” or “HK” suffix – instead of low-power CPUs designed for longer battery life, which indicated by a “U” or a “Y” suffix.

What type of screen do you need?

With budget laptops, you want to keep the load on the GPU to a minimum to ensure you keep your frame rates as high as possible and that means keeping the resolution to a maximum of 1080p, no matter the size of the display.

A high screen-refresh rate is also worth having on a gaming laptop. Most regular laptop displays top out at 59 or 60Hz but thoroughbred gaming machines push that to 144Hz, 165Hz or even 240Hz. Having a fire-breathing GPU that can generate 120fps is pointless if your display can only output half that.

Remember, Hz refers to the number of times a display can output an image per second, so a 60Hz display can only output games at 60fps, no matter the performance level of the GPU.

What other features should you look for?

A keyboard optimised for the unique demands of gaming is another feature to contemplate. I’ll leave you to ponder the worth of a keyboard that lights up with all the colours of the rainbow but a design that highlights the old faithful WASD movement keys, has a solid foundation and a decent amount of key travel is certainly worth having.

You might want to consider the cooling system too: games can drive a laptop hard so you don’t want to run into any issues with thermal throttling or end up with a machine so hot you can fry an egg on the palm rest. Most gaming laptops have bespoke control panels that let you boost the fan speed to keep things cool.

Lastly, you’ll need a decent amount of storage. You can fill up a 256GB SSD with less than half a dozen AAA games so you really need at least 512GB and ideally 1TB with the option to install more capacity as and when required.

The best budget gaming laptops to buy in 2021 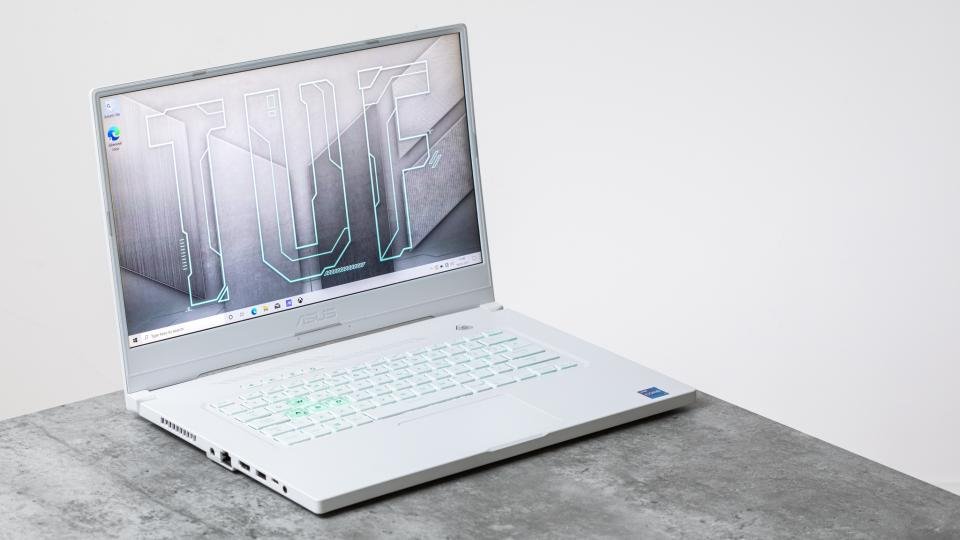 The combination of an eleventh-generation i7 processor, Nvidia’s rather awesome RTX 3070 GPU and abundant memory – 16GB system and 8GB graphics – makes the new Asus TUF Dash 15 a cracking gaming rig. Until relatively recently, the £1,299 asking price wouldn’t have got you anything nearly as powerful or capable of rendering the latest real-time Ray Tracing technology.

The Dash 15 is also the only machine here to offer 1TB of storage as standard, a useful acknowledgement of the ever-increasing size of top-end gaming titles. And there is still a slot for a second M.2 SSD as well. Add to that a very decent 240Hz display, a good quality sound system and decent battery life and you are onto a winner. It looks the part too, especially in the striking Moonlight White livery.

The only real drawbacks are the absence of a webcam and the rather lurid aquamarine keyboard backlight. For the money, I’d have appreciated a configurable RGB backlight. The translucent WASD keys are a nice visual, and practical, touch though. At 2kg dead it is also pretty light for a gaming machine. 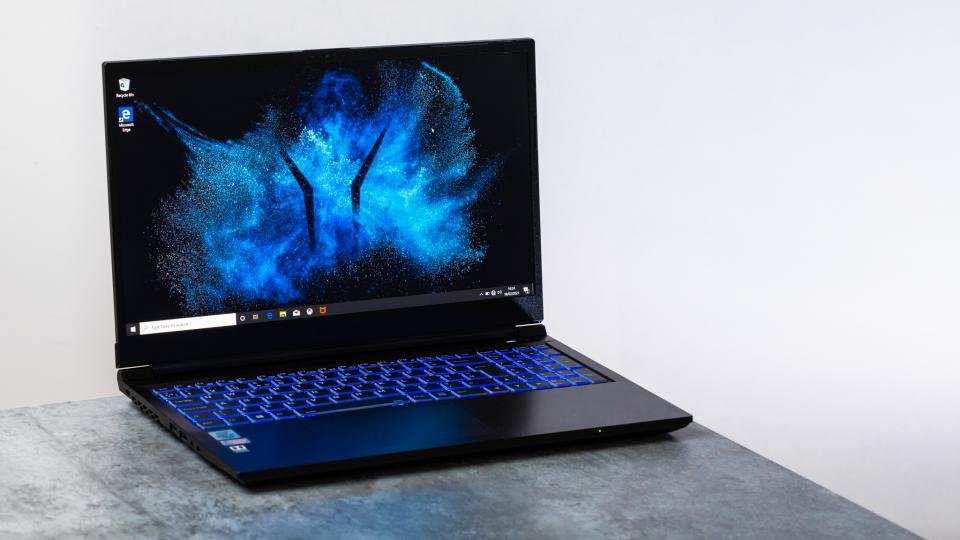 There may be a slight whiff of the Aldi centre aisle about the Medion brand, but at only £700 the Erazer E10 is one of the cheapest gaming notebooks on sale in the UK and offers a discrete Nvidia GPU wrapped up in a reasonably solid and stylish case.

Some elements of the package are perhaps a little too bargain basement; the speakers are very poor while the IPS display is dull and drab and only refreshes at 59Hz. But the keyboard boasts a numeric keypad and is mechanically impressive plus there are plenty of options to upgrade after you have made your purchase. With only 256GB of storage on offer, an extra SSD should be top of your list.

To keep the price down, Medion has used a tenth-generation Core i5 processor, but that still has the cojones to execute basic productivity tasks with reasonable speed and efficiency, while the GeForce 1650Ti GPU keeps the majority of AAA games running smoothly. Battery life isn’t too bad either.

3. Acer Nitro 5: A solid offering at a tempting price 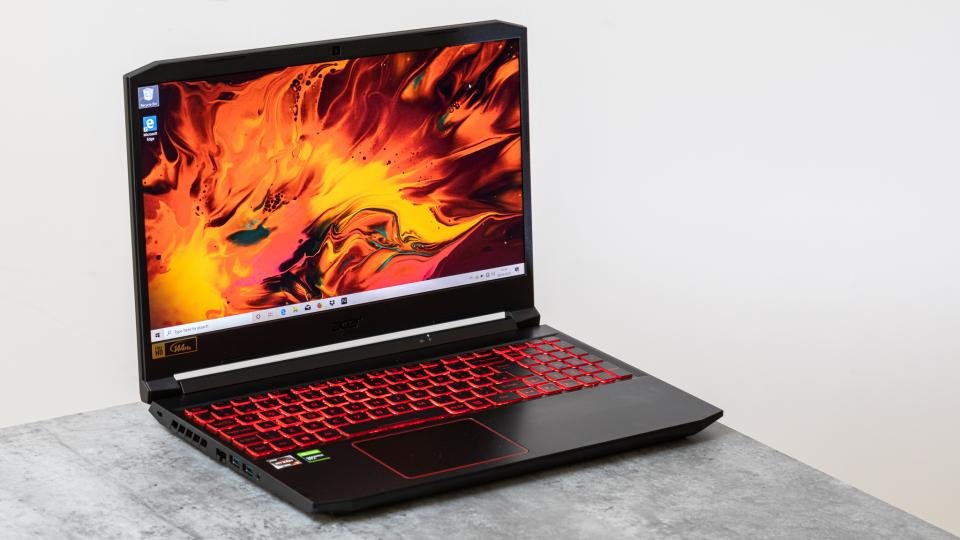 The prototypical gaming laptop right down its red backlight and red highlighted keys, the Nitro 5 is a well-balanced package for the money. Our review model consisted of the AMD Ryzen 5 4600H machine in an Amazon-exclusive bundle with a Nitro-branded headset, gaming mouse and mouse mat for £999. Forgo the accessories and the same money gets you the Ryzen 7 4800-based version which is a little more powerful but uses the same GeForce 1650Ti GPU.

The Nitro is slightly let down by a drab and rather colour-inaccurate display – albeit one with a 144Hz refresh rate – and less than stellar speakers. On a more positive there are plenty of user-upgrade opportunities including two M.2 SSD mounts, one 2.5in SATA3 bay and a free RAM slot. As standard, the Nitro has 512GB of storage and 8GB of RAM so you will probably need those expansion ports sooner rather than later.

The keyboard is mechanically sound and comes with a full numeric keypad which I always like to see on a gaming setup. Acer’s Nitro Sense system control panel is an object lesson in simplicity, letting you easily modify the fan settings to best suit your needs. Battery life is solid and the DC-in jack is nicely hidden away at the back of the machine. All in all the Nitro 5 is a solid option. 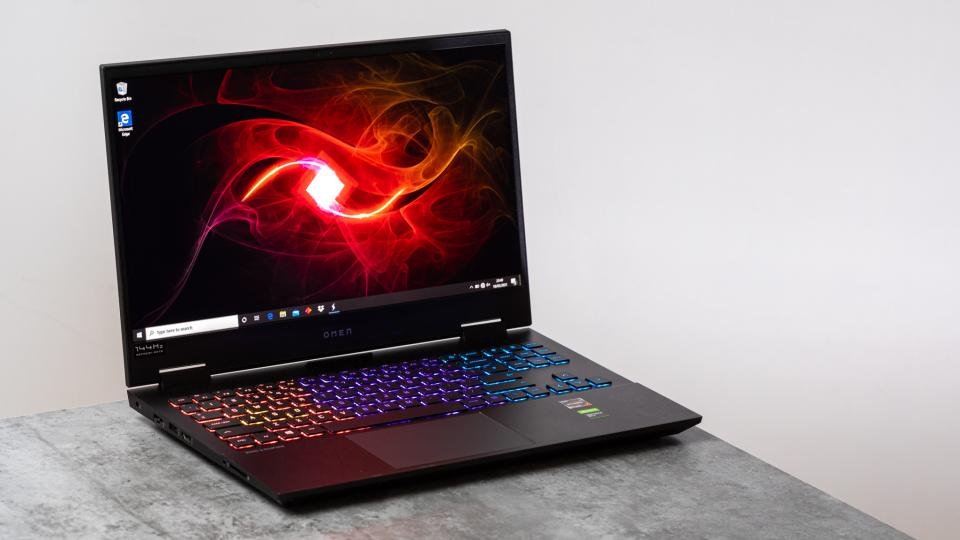 Thanks to an AMD Ryzen 7 4800H processor, 8GB of RAM and an Nvidia GeForce GTX 1660Ti GPU, the HP Omen 15 packs quite a punch for a laptop costing only £1,099. It’s a stylish machine, too, the aluminium palm rest and keyboard surround offsetting the otherwise plastic construction.

We were also impressed by the amount of detail the Bang & Olufsen-branded speaker system produced and by the range of ports and connectors the Omen boasts. And the display is pretty decent too; bright, if a little lacking in colour representation. The keyboard is solid and stylish with four-zone RGB lighting effects but there’s quite a lot of wasted space on the right.

Battery life was a little disappointing considering the 70.9Wh capacity, and the fans are rather loud when they’re running at full tilt, but those are the only real criticisms we can make of a machine that manages to be both a funky, capable gaming machine and a smart, powerful productivity laptop at the same time.