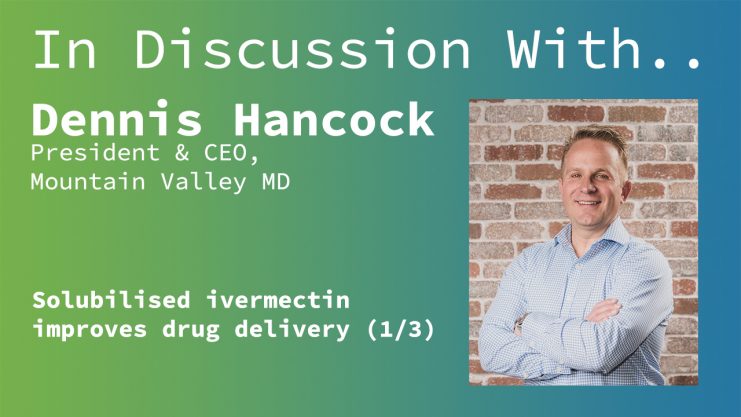 Patented solubilisation technology improves the bioavailability of oral ivermectin and makes possible the formulation of an ivermectin injection for human use, according to recent work undertaken by Mountain Valley MD in Canada.  IMI spoke to Dennis Hancock, President and CEO of Mountain Valley MD to find out more.

Mountain
Valley MD is a public company that’s focused on biotechnology innovation – it
works with existing molecules to make them more soluble or to develop
formulations that deliver the drugs more effectively.

Ivermectin
is of particular interest to Mountain Valley MD. It has applications both in
human and animal medicine. In humans it is used as an anti-parasitic and has
recently been used in many countries in the treatment of covid-19. It is also
widely used in animal husbandry and for treatment of ticks and parasites in
companion animals.  “What people may not
realise is the vast safety and efficacy in humans – to date it’s been administered
over 3.8 billion times in humans with an adverse event rate of only 168 events
per year. You’d be surprised to know that is safer than most vitamins!” says Mr
Hancock.  “It’s defined as a blockbuster
drug which means it’s done at least a billion dollars in annual sales and it’s
done that for 20 years”, he adds.

The
number one limitation for ivermectin is its poor solubility (in water). “The body’s
ability to absorb a drug is directly related to its solubility and
bioavailability in turn”, explains Mr Hancock.  Moreover, there is still no injectable form of
the drug for human use and so ivermectin has to be taken by the oral
route.  “It takes about six hours for its
onset and has a 40% variability which means it’s difficult to prescribe for
humans”, explains Mr Hancock.  Taking
ivermectin with food (especially high-fat food) improves absorption and
distribution is affected by body weight.1

Currently
the only injectable form of ivermectin has been developed for use in large
animals and contains excipients that are not approved for human use.  The Mountain Valley MD product, IvectosolTM contains solubilised ivermectin. “We have a technique that
is applied to the macrocyclic lactone drug class – one of which is ivermectin
and another is selamectin – there are 12 or 13 of them in this class. So now
we’ve taken ivermectin and made it 5000 times more soluble using two excipients
that are already approved by the FDA as safe for human consumption.  So it’s the only leading candidate in the
world that’s safe for human injection”, says Mr Hancock. “It’s also the same
solubilised form that we’ve used in a rapid-dissolve sublingual application –
take something the size of a little piece of gum that dissolves under your
tongue”, he adds.

Compared
to existing oral forms, the sublingual presentation offers a number of
advantages. “We’ve done preclinical trials  – we’ve been able to use one fifth of the ivermectin,
the API (active  pharmaceutical
ingredient) in this case, and achieve a sublingual [dosage form] – so again it does
not go through digestive enzymes – it crosses directly across the [oral] mucosa
and we’ve achieved a one-hour onset, with 5% variability”, explains Mr
Hancock.  The injectable form uses one
eighth of the API and has a 15-minute onset of action.

He
concludes, “So we have basically an oral form that uses less of the drug,
dramatically more effect in a fraction of the time and then the same thing with
the solubilised [injectable] format. You can now imagine emergency use
authorisation, frontline – before you put someone on to a ventilator you can
inject them with the precision the medical requirement would dictate.” This
makes IvectosolTM a leading candidate as a treatment for covid.