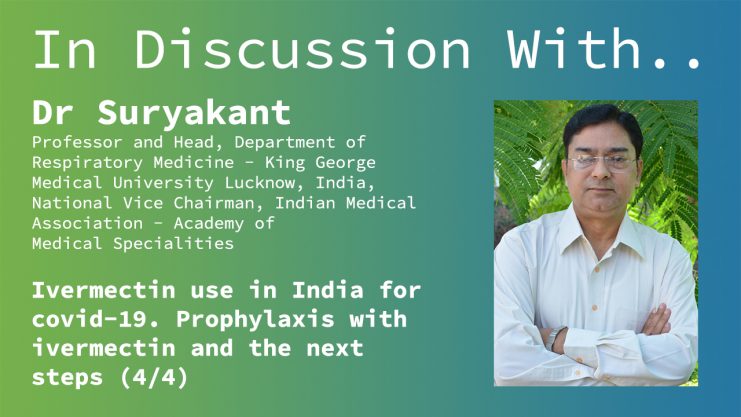 Prophylaxis with ivermectin and the next steps

Ivermectin should be used for prophylaxis and treatment of covid-19 throughout India, according to Dr Suryakant (Head of the Department of Respiratory Medicine at King George Medical University in Lucknow, India).

When covid-19 is diagnosed and home isolation
required, prophylaxis is provided for all the household contacts, explains Dr
Suryakant.  The regimen is ivermectin 12mg
on day 1 and day 7. This is different from the prophylaxis offered to health
care workers, he emphasises.

In the early stages of the pandemic doctors,
nurses and health care workers received hydroxychloroquine prophylaxis but a
survey carried out at King George Medical University (KGMU) showed that 17% of health
care workers developed some kind of side effect with hydroxychloroquine. “This
was alarming! We told our administration that will not take this drug. This is
not a safe drug for us”, says Dr Suryakant.
After the Government Order (for the widespread use of ivermectin) was
issued the regimen for health care workers became ivermectin 12mg on day 1, day
7, day 30 and then once a month thereafter. Dr Suryakant himself has continued
to take a monthly dose of ivermectin even after two doses of vaccine and so have
all his staff. “My office workers, computer workers, sick attendants, nurses –
everybody is now taking ivermectin once a month – and throughout Uttar Pradesh for
all health care workers”, he says.

There are two unanswered questions concerning
ivermectin – one is about the most effective dose and the other is about the
effectiveness of mass prophylaxis.

To answer the first question the All India Institute
of Medical Sciences in Delhi is undertaking a trial that will compare the effectiveness
of different doses (6mg, 12mg, 18mg, 24mg and 32mg).

The second question may be answered when the
results for Goa become available. The Health Minister for the State of Goa
announced on 10th May 2020 that all people over the age of 18 years
were to be given ivermectin 12 mg for five days, starting immediately.

Commenting on the World Health Organisation (WHO)
advice Dr Suryakant says, “If I am convinced that this drug can save lives it
is my moral responsibility as an Indian, a citizen of this country, to protect
the lives of my people so I will use ivermectin – what WHO says I will never
mind”.

Dr Suryakant’s dream is that ivermectin will be
used throughout India. At present 13 out of 28 states in India are suffering
badly with covid-19 and seven of these have adopted the use of ivermectin. “If
seven are following my thinking, this is my victory…around 75-80% of the
population that is suffering badly is using ivermectin so this is our victory –
and I wish that it should be pan-India”, he says. He has also requested the
Indian Council for Medical Research (ICMR) and Dr Harsh Vardhan, Minister of
State for Health and Family Welfare of India to consider following the example
of Goa and provide mass prophylaxis with ivermectin. At the very least this is
needed for rural areas where health infrastructure is less robust and health
care facilities are lacking, he explains.

In summary, he says, “This is my request to WHO – please can you advise on a policy [for ivermectin use] for developing countries at least. This is a cost-effective drug, this is a safe drug and let us try this! Of course, in India I think the day will come when it will be used pan-India. ……Of course after vaccine, ivermectin can be a very important tool to save humanity, to save our people.”

Dr Suryakant is brand ambassador for covid vaccination in India. He is a respiratory physician and past president of several chest associations in India. He has also held a leadership position in the Indian Medical Association, a body with 400,000 members.