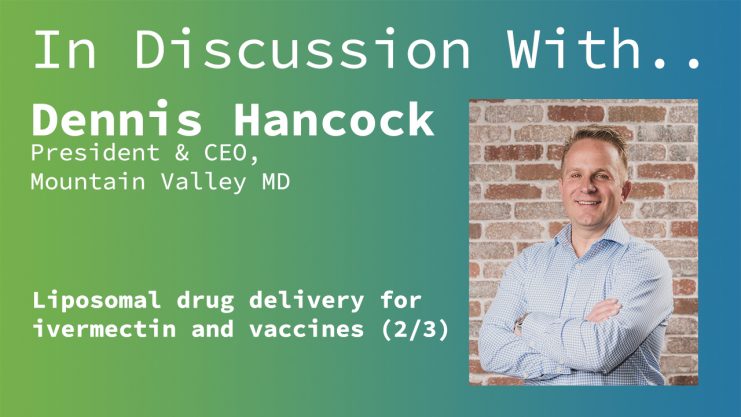 Liposomal
drug delivery holds out the prospect of oral drug administration without the
need for water and vaccine more economical use of oral vaccines, according to Dennis
Hancock, President and CEO of Mountain Valley MD.

IvectosolTM,
the solubilised form of ivermectin produced by Mountain Valley MD has been
tested against three variants of SARS-CoV2 and has proved effective at
interfering with viral replication and driving viral clearance in each case.
The study was conducted in a biosafety level 4 (BSL-4) laboratory.

“What’s
really exciting – in a mouse model we tested [the drug] against the original
variant and were able to prove the effectiveness of Ivectosol in completely clearing
and preventing covid-19. Further in vitro
studies then established the drug’s efficacy against the original variant, the
South African variant, and the Brazil variant. This laid the foundations for
the next steps which will be human trials and then full scale production inside
both Bangladesh and on the continent of Africa.

Mountain Valley MD has developed two types of liposomal delivery system. One is a solubilised form that relies on the company’s patented QuicksolTM  technology. This is used in the injectable form. The other is a desiccated liposome technology – QuicksomeTM  that is used in a sublingual dosage form.

Mr
Hancock explains that many of the drug molecules that they use are
heat-sensitive and so a low-temperature process was required to encapsulate the
drugs into liposomes. The desiccated liposomes are completely dry and are used
to make the sublingual dosage form which is presented as a soluble oral film.
The company has also made a rapid-dissolve wafer and thin, ‘sugar-sip’
presentations that are poured under the tongue.
“So depending on load we would take the molecule, protect it in a
liposome format and then as it hydrates the liposome simply adheres to the skin
cells and transfers the contents into the body across the mucosa”, explains Mr
Hancock.   “So our oral rapid-dissolve format is in a
packed powder format – it’s a tablet you can hold with your hand but it
requires no water [for administration] you let it dissolve. And so – the saliva
actually rehydrates the molecules in the liposome format”, he adds.

This
technology could offer important benefits for third world countries where it is
difficult to maintain a cold chain during transport. Moreover, a product that
can be administered sublingually, without the need for water, and uses one
fifth of the active pharmaceutical ingredient (API) has a double benefit, says
Mr Hancock.

Mountain
Valley MD has also explored the use of its liposome technology for vaccine
delivery. This arose from the personal interest of one of the principal
scientists whose father had suffered from polio. “He started – almost on a
personal mission – doing some very advanced work suspending the polio vaccine
inside our liposome format and then testing its ability to be preserved in that
format. So, we could imagine sublingual vaccines, needle-free vaccines and then
also distribution outside of cold chain. So we’ve done some really amazing work
with Dr Chumakov at the FDA Polio laboratory and his team”, explains Mr
Hancock.

The company has also undertaken advanced cold chain testing to find out whether the vaccine could be packed in vials, transported without refrigeration and then rehydrated locally.  “What’s amazing when you learn about third world electricity infrastructure [is that] 90% of third world countries don’t have the electricity infrastructure needed. The resulting problem is we see over $17 billion spent in cold chain logistics which is keeping vaccines between 2.0 and 8:0 degrees Celsius. Then you have the problem of wastage as things come outside of that cold chain infrastructure. People would be shocked to learn over $35 billion a year worth of vaccines are spoiled and literally disposed of –  which is almost half that [which is]  even produced”, he says. Reducing the logistics costs and ensuring that more of the vaccines reach the intended users is very much in keeping with the Mountain Valley MD business model. “You know that’s a $50 billion problem that could be poured into schools and infrastructure and business and true drivers of economy …… so we’re really excited about the work and what this breakthrough will inform, which could transform how a lot of that vaccine work is done in the future”, he concludes.