Which ‘PSL 7’ Players should be Fast-Tracked for Pakistan?

The Pakistan Super League 2022 also known as PSL 7 has seen some gifted players performing and staking a claim to play for the national side.

PSL 7 is no different from the previous editions, becoming a breeding ground for existing and emerging talent.

Previously, the likes of Fakhar Zaman, Shadab Khan, and Shaheen Shah Afridi have gone from the PSL to represent Pakistan.

PSL 7 is once again highlighting the batting prowess of Azam Khan who plays for Islamabad United.

There is also a Kashmiri rookie making the headlines for Lahore Qalandars. In addition, an all-rounder from Karachi Kings and a wicketkeeping opener for Peshawar Zalmi should also be in contention for national duty.

We showcase cricketers from PSL 7 that selectors should quickly elevate to play for Pakistan. 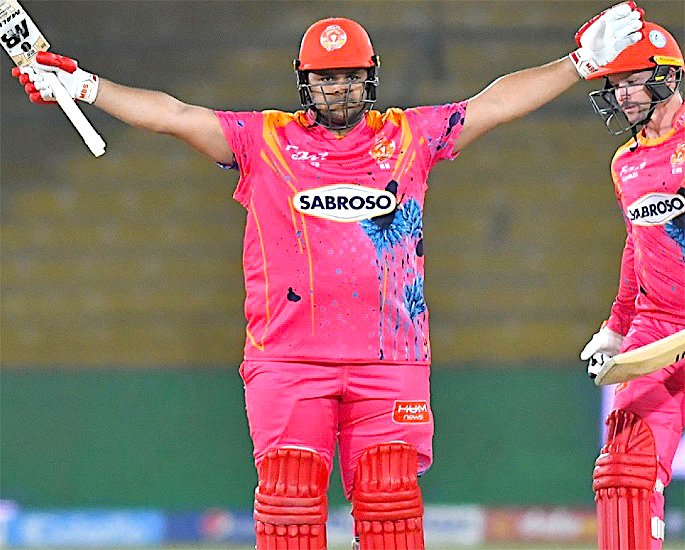 Azam Khan is no stranger to the Pakistan national team, having made his T20 international debut in 2021 against England.

The wicketkeepe- batsman was  born in Karachi, Pakistan on August 1o, 1998.

Azam makes our list because he has only had a short stint with the Men in Green. Evidently, his weight has had a major contribution to this and has been a constant talking point.

He also had a loss of form during Pakistan’s 2021 domestic T20 competition. Consequently, he had a tough pill to swallow when he was dropped from the Pakistan T20 World Cup 2021 squad.

However, Azam has once again made a big case for himself with his amazing performances in PSL 7 for Islamabad United.

On February 3, 2022, at National Stadium Karachi, Azam went all guns blazing against the Quetta Gladiators.

He made 65 runs off thirty-five balls including six 6s and two 4s. He was particularly fierce on former Pakistan all-rounder Shahid Afridi.

Islamabad won the game conformably by forty-three runs, with Quetta all out for 186 in reply to Islamabad’s 229-4.

At the post-match ceremony, the man of the game, Colin Munro (NZL) had positive words to say about Azam since moving to United for PSL 7.

“Azam Khan was outstanding, he is a wonderful ball-striker and it’s great to have him on our side from this year’s [2022] PSL.”

Azam made his second fifty-plus score (85) as his side narrowly lost to Peshawar Zalmi by ten runs at the Gadaffi Stadium Lahore on February 17, 2022.

With such natural hitting, Pakistan should have a rigorous fitness programme for him, so that he can fit into the middle-order. He can prove to be a real x-factor for Pakistan when he comes back. 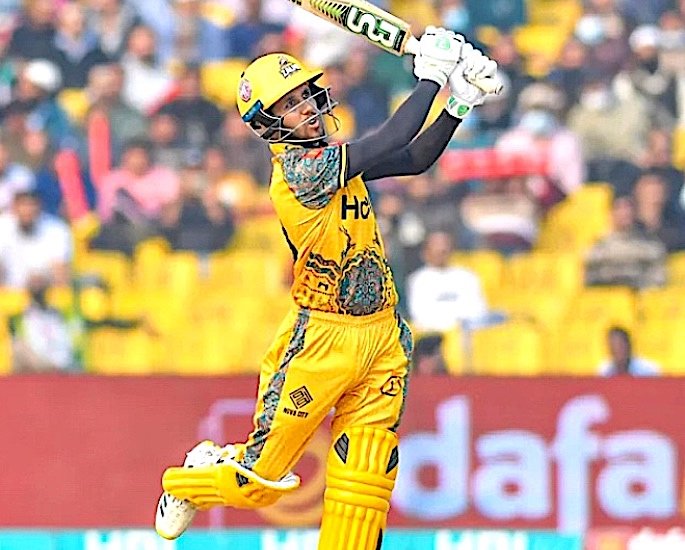 Mohammad Haris has been quite a revelation for Peshawar Zalmi during PSL 7. The wicketkeeper-batsman was born in Peshawar, Pakistan on March 30, 2001.

Haris had already come into the Pakistani fold when he made the ODI squad for the home series against New Zealand.

Unfortunately, that tour did not take place as per schedule. Haris has made the most of his PSL chances, even though he did not feature initially for Peshawar during the Karachi matches.

Haris made his PSL debut on February 13, 2022, versus Karachi Kings in Lahore. He was quick out of the blocks, smashing 49 off twenty-seven balls. He went on to collect the man of the match award.

In his third match against Islamabad United, he made 70 off thirty balls at the Gadaffi Stadium on February 17, 2022.

He reached his fifty in eighteen balls, equalling the record of the fastest half-century in the PSL. After collecting his second player of the match award, Haris spoke about his innings strategy:

“I try to apply pressure from ball one and go big in the powerplay.”

“I premeditate sometimes but try to read what the bowler is doing based on the field placements. Peshawari players work hard and are, thus, successful.”

With this flamboyant innings, Zalmi had gone on t register a hat-trick of wins. Haris should be part of the Pakistan limited-overs squad, battling it out with Sarfaraz Ahmed for the second wicketkeeping spot.

Haris can also play as a pure batsman if he continues this kind of form. 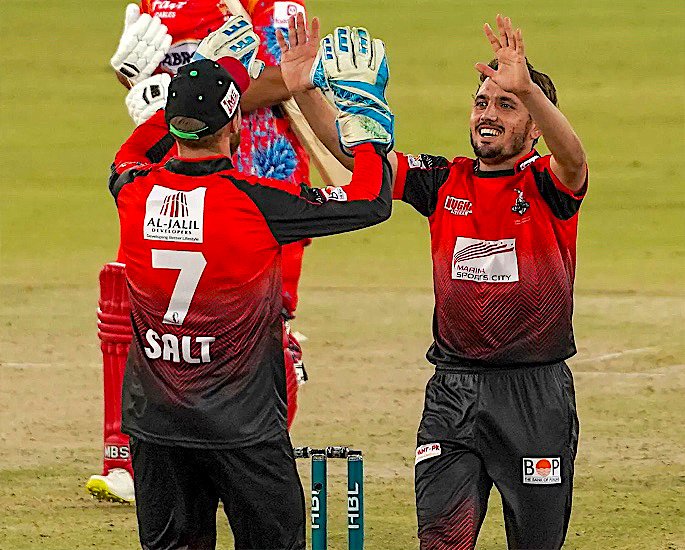 Zaman Khan is a fantastic cricket player of great zeal. The right-arm fast bowler with a low-slung action was born in Mirpur, Pakistan on September 10, 2001.

Zaman has been on fire in PSL 7 – his debut season. In only his third match, he took 3-32 as Lahore beat Peshawar Zalmi by twenty-nine runs at the National Stadium on February 2, 2022.

He was adjudged the man of the match for this game. In Qalandars’ following game, Zaman showed the world, that he can bowl under the utmost pressure.

He successfully defended nine runs in the last over of the match against Islamabad United at the National Stadium on February 5, 2022.

With Asif Ali and Azam Khan batting in the final over, he only conceded three runs. In that particular over, he also took the wicket of Asif as the Qalandars defeated United by eight runs.

His sensational final over deservedly gave him the player of the match award. Twitter went frenzy about Zaman, with one fan tweeting:

“Zaman Khan what a young talent.”

“Zaman is the future of Pakistan, he is a good bowler, he proved that by taking man of the match awards in consecutive matches.”

Zaman went on to take another three-wicket haul versus Multan Sultans, claiming 3-21 in Lahore.

This was the first match Multan had lost as Qalandars convincingly overcame them by fifty-two runs at Gadaffi Stadium on February 11, 2022.

His best figures of 4-16 came against Karachi Kings in Lahore on February 18, 2022. The humble Zaman is in many ways the find of the tournament.

He is fast, accurate with the ability to bowl slinging yorkers. Pakistan has had many players representing the national side from Punjab, Singh, and Khyber Pakhtunkhwa.

Zaman presents a unique opportunity for a Kashmiri fast bowler to play for the Green Shaheens. He should be a must for the 2022 Cricket World T20 tournament. 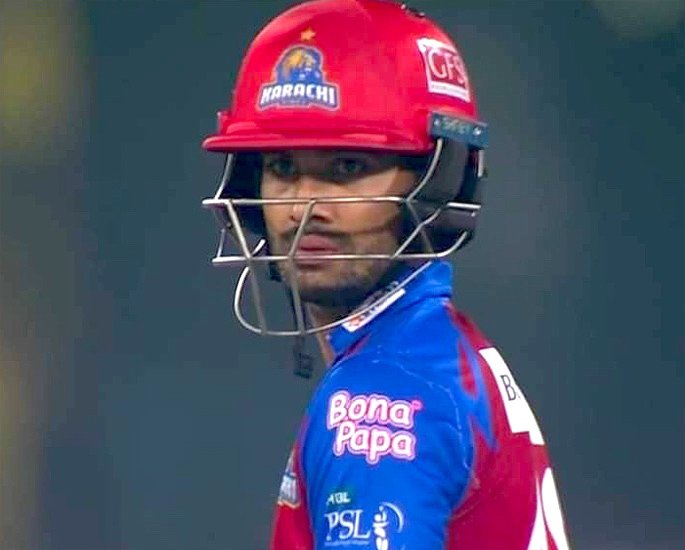 Qasim Akram is an all-rounder who has shown his immense talent in PSL 7. He was born in Pakistan on December 1, 2002.

Prior to the PSL, Qasim had already given a glimpse of his class during the 2022 Under-19 Cricket World Cup.

In that event, he became the first cricket player to make a hundred and claim five wickets in a Youth ODI game.

Come to PSL 7 and his form continued for the Karachi Kings. In only his second PSL 7 game, Qasim made a half-century mark against Islamabad United on February 14, 2022.

He almost went on to pull off a massive chase but lost his partners at the other end at the Gadaffi Stadium. He made an unbeaten 51 off twenty-six balls, containing one 6 and six 4s.

Despite losing the match by one wicket, Qasim made a big impression on everyone.

Even though his side came second best, Faizan Lakhani of GEO TV went on to compliment Qasim. He wrote on his Twitter account:

“Kings defeat tonight must not overshadow the superb performance in pressure by young Qasim Akram.”

With Mohammad Hafeez retiring from the national side, Qasim has the right credentials to slot in his place. Qasim is especially the right fit for limited-overs cricket.

With all these players, the imminent future is bright for the Green Shirts. And it does not just stop there.

Fans should keep a watch on Muhammad Huraira who became the second youngest cricketer to make a triple hundred in Pakistan.

Then there is 6 foot 8-inch pacer Muhammad Zeeshan from Faisalabad who should be ready by the time he reaches eighteen or nineteen.

Meanwhile, PSL 7 has yet again proven to be a great platform for unearthing special future stars. This all sets well for Pakistan cricket.