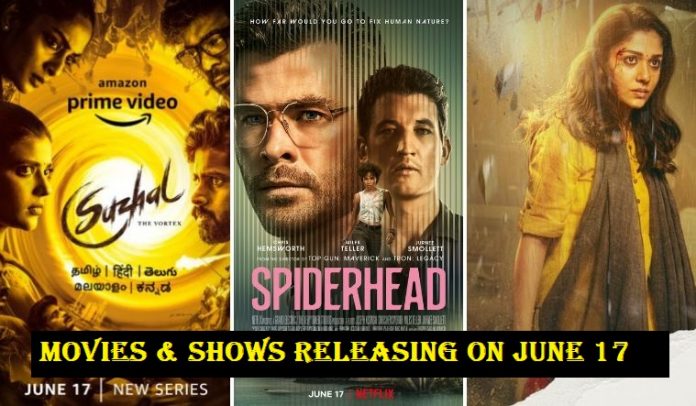 It’s the start of a new weekend. If watching movies or web series is in your plans for this weekend, we are here to help you out. We are listing down the top 5 movies and shows releasing on June 17, 2022. You can enjoy these releases over the weekend. Let’s get started:

The crime thriller starring Aaditi Pohankar was one of the top Hindi web series’ of 2022. Now, the show is returning for its second season. Bhumika Pardesi (Aaditi Pohankar) is again asked to return to Mumbai’s dark side for the “final” secret operation. She takes up the challenge only to find herself between her desires and duty. She will don a glamorous and hot avatar this season and the fans are excited to see her.

Disney+ Hotstar’s Masoom is an Indian remake of the Irish drama series Blood. The six-part psychological thriller series, set in Falauli, Punjab, follows a daughter’s quest to discover the truth about her mother’s death, though her family wishes to hide the truth under the threads of love and protection.

The intense crime thriller set up in a small village goes beyond the usual investigation and shakes up the cultural and societal fabric. This Tamil thriller stars Aishwarya Rajesh, Kathir, R. Parthiban, and Sriya Reddy and is directed by Bramma and Anucharan. M. Pushkar and Gayathri best known for the Tamil blockbuster Vikram Vedha are the showrunners.

In this survival thriller movie, Nayanthara plays a single mother of a child, who can’t breathe without oxygen support. The situation turns threatening when the bus in which the mother and son are traveling falls into a massive hole. The real chaos shatters when everyone stuck below the ground starts fighting over the boy’s oxygen tank.

The only theatrical release of the week is Nikamma. It is an action-comedy movie starring Abhimanyu Dassani, Shirley Setia, Ashik Nihon, and Shilpa Shetty. Directed by Sabbir Khan, it is a remake of the 2017 Telugu movie Middle Class Abbayi.

Besides these 5, two other major releases are The Boys Season 3 Episode 5 on Prime Video and the Hollywood movie Spiderhead on Netflix.