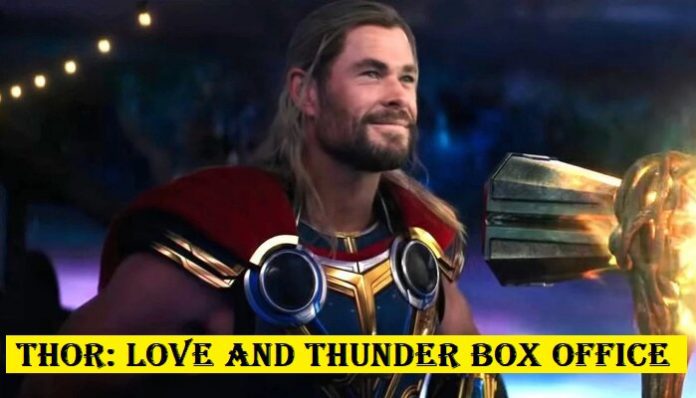 Thor: Love & Thunder is steered to take an opening in of around Rs 18 Crore in India.

The highly-anticipated ‘Thor: Love And Thunder’ has finally arrived in theatres in India. The fourth installment of the Thor franchise has released in India a day prior to its domestic release on July 8. In India, the movie has been released on around 2800 screens in six languages English, Hindi, Tamil, Telugu, Kannada, and Malayalam.

Thor: Love & Thunder is the fourth movie of the Thor franchise and a direct sequel to Thor: Ragnarok released in 2017. Directed by Taika Waititi who also directed Thor: Ragnarok, Thor 4 is backed by Marvel Studios. It is the 29th movie in the MCU (Marvel Cinematic Universe).

The advance booking for Chris Hemsworth starrer opened on June 17. However, the response hasn’t been as good as Marvel’s earlier two releases, Doctor Strange 2 and Spiderman: No Way Home. As per reports, Thor 4 has done a business of Rs 14 Crore gross through in advance for Day 1. On the other hand, Doctor Strange 2 had garnered a huge Rs 25.5 Crore.

Made on a whopping budget of $250 million (Rs 1950 Crore approx), ‘Thor: Love and Thunder’ is off to a good start at the box office. Released on around 2800 screens, the Marvel biggie is poised to collect around Rs 18 Crore on Day 1. Please note that the movie is releasing on Thursday, a day prior to a traditional release day (Friday). So, one can expect huge growth in numbers over the weekend. Thor: Love And Thunder will be the fourth-highest opening day Hollywood grosser in India.

Chris starrer is projected to earn around $150 million (Rs 1185 crores approx) in U.S and Canada on the first weekend. The movie is looking to close the opening weekend with earnings of around $300 million.

About Thor: Love and Thunder

Thor: Love and Thunder is a superhero action-comedy movie based on the Marvel Comics character Thor. It is the direct sequel to Thor: Ragnarok (2017) and the 29th film in the Marvel Cinematic Universe (MCU). Helmed by Taika Waititi, the movie also stars Tessa Thompson, Jaimie Alexander, Natalie Portman, and others.