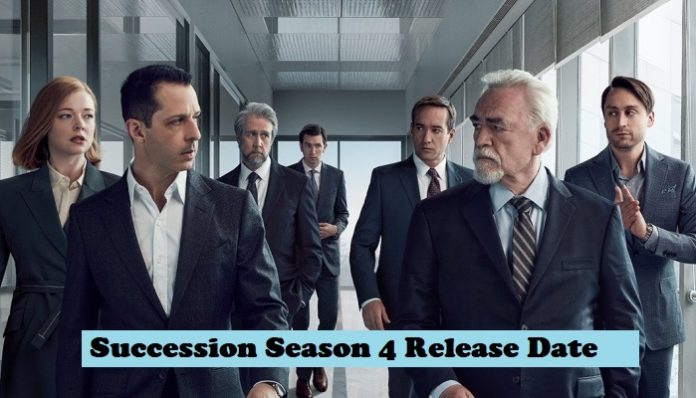 Succession Season 4: Release Date & All You Need To Know

Succession Season 4 release date: When will Succession return for its fourth season on HBO and HBO Max?

We hope that you have recovered from Succession Season 3’s twisting finale. In the end, Logan Roy (Brian Cox) emerged as the ultimate boss and it would be interesting to see how Kendall, Shiv, Roman, and Conner counter him. After a stressful and shocking finale, the fans are starving for more Succession episodes. So, what’s the update on Succession Season 4? When will it premiere? Here’s everything we know so far about Succession Season 4.

Will there be Succession Season 4?

“With each season of Succession, Jesse Armstrong has continued to surpass our wildest expectations, pulling us deeper into the Roy family’s inner sanctum with indelible wit, humanity, and precision,” said Francesca Orsi, executive vice president of HBO Programming, in a statement.

“This season is undoubtedly no exception, and we couldn’t be more excited for all that’s in store in this next season ahead.”

Succession Season 3 premiered on Oct 17, 2021. Its premiere drew over 1.4 million viewers across all platforms, the best premiere of any HBO original series since HBO Max launched in May 2020.

Succession premiered on June 3, 2018, on HBO. Soon the series was renewed for a second season that premiered on Aug 11, 2019. However, the third season got delayed thanks to the pandemic. When Season 3 was announced in Aug 2019, filming was presumed to start in April 2020 but was delayed due to COVID-19.

With life back to normal, it’s unlikely that we’ll see another two-year break that happened between Seasons 2 and 3. Production on the 10-episode fourth season began in New York City on June 27, 2022. The production team takes around 1 year to bring the new season on our screens. Considering there won’t be any delays, we would get Succession Season 4 in the second quarter of 2023.

What happened in Succession Season 3 finale?

Succession follows the Roy family, owners of media empire Waystar RoyCo. The family leader, Logan Roy (Cox), hasn’t been keeping and experiencing a decline in health. His four children – Connor (Ruck), Kendall (Strong), Roman (Culkin), and Shiv (Snook), all with some connection to the company. As they begin to prepare for a future without their father, the game of grabbing the ultimate power begins.

The third season of this addicting show ends on a thrilling note. After three seasons spent pouting over who would take control of WayStar RoyCo, Kendall (Strong), Shiv (Snook), and Roman (Culkin) face the biggest shock of their life when Logan (Cox) decided to sell the company to tech billionaire Lukas Matsson (Skarsgård).

With everything going out of their hands, the siblings make a new plan and agree to work together to prevent the sale of Waystar. Each of them agreed to take over a major corporate position to devoid Logan of his right to sell the company.

When learned of his children’s plan, he convinced his ex-wife to hand her shares over to him, making Kendall, Shiv, and Roman’s veto power useless. This comes as a big shocker for the three who are now left with nothing. Tom is revealed to have tipped off Logan about the children’s plan.

HBO released a brief synopsis for the season, which will consist of 10 episodes. Here’s the summary:

“The sale of media conglomerate Waystar Royco to tech visionary Lukas Matsson moves ever closer. The prospect of this seismic sale provokes existential angst and familial division among the Roys as they anticipate what their lives will look like once the deal is completed. A power struggle ensues as the family weighs up a future where their cultural and political weight is severely curtailed.”

After a thrilling season 3 finale, the fans are starving for more. Will Succession Season 4 see the sale of Waystar? or is there another twist in the tale? Will, we will only find out when Season 4 premieres next year.

We can’t imagine Succession without the mysterious family of billionaires. The entire Roy family, including Brian Cox, Jeremy Strong, Kieran Culkin, Sarah Snook, Alan Ruck, Matthew Macfadyen, and Nicholas Braun, are confirmed to reprise their roles in the next season.

Where to watch Succession?

Succession is one addictive black comedy show. The first three seasons of Succession are available to stream on HBO Max.