“It’s beyond embarrassing at this point.”

The second picture of Salman Khan’s marriage with Sonakshi Sinha is going viral on social media.

It turns out that Salman Khan and Sonakshi Sinha’s faces have been morphed into the wedding pictures of Varun Dhawan and his wife Natasha Dalal.

The 56-year-old is considered one of the most eligible bachelor celebrities.

He finds humour when making statements and facing questions about his marriage.

The picture showed Salman in a suit placing a ring on Sonakshi’s finger who is in red.

She is also wearing statement jewellery and has vermillion on her head.

The image was posted on Facebook and the caption stated that the picture is their first look after their marriage.

It subsequently went viral and some social media users sent their congratulations. 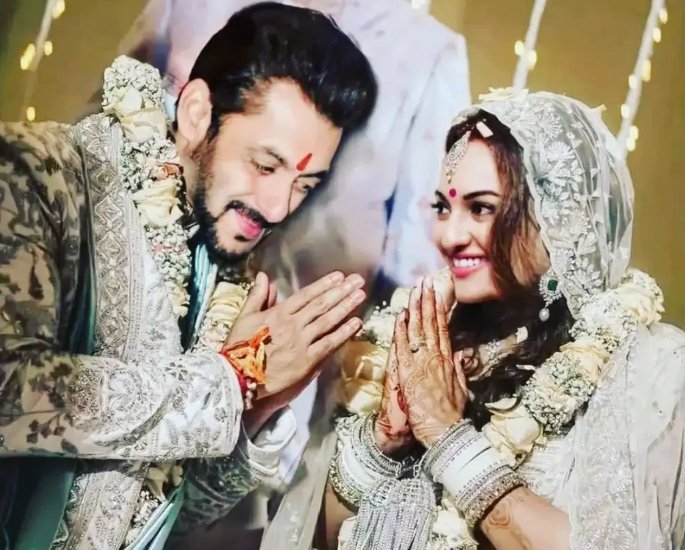 Sonakshi Sinha reacted to the first picture and hit out at netizens who believed she had tied the knot.

She said: “Are you so dumb that you can’t tell the difference between a real and a morphed picture.”

Others had also commented on the edited picture.

One person said: “This photo looks like Race 3 CG level and some people still believe this is true.”

Another wrote: “It’s beyond embarrassing at this point; heights of ridiculous.”

Salman’s latest project is Maneesh Sharma’s Tiger 3, which is expected to release in late 2022.

He will also be seen in Kabhi Eid Kabhi Diwali.

The latter’s direction is helmed by Farhad Samji. Pooja Hegde will play a leading role.

Sonakshi Sinha made her debut with the superhit project Dabangg.

Her performance in the action picture earned her many awards such as Best Female Debut in the 2011 Filmfare Awards.

The Lootera actress won the Star Debut of the Year – Female award in the International Indian Film Academy Awards the same year.