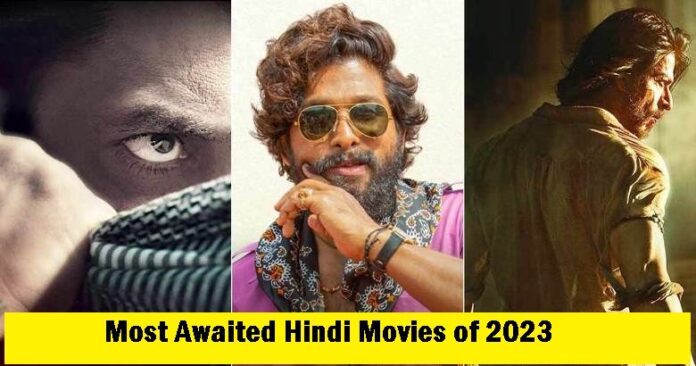 Pathaan to Pushpa 2, a look at the most awaited Hindi movies of 2023.

2022 hasn’t been a good year for Bollywood with most releases flopping at the box office. In fact, we saw some terrible Hindi movies this year like Shamshera, Liger, Bachchan Pandey, Heropanti 2 and Dhaakad. The industry would look to make a strong comeback and our hopes are high from below mentioned movies. A lot is driving on these seven most awaited Hindi movies of 2023.

Pushpa 2 is unarguably the most anticipated Indian movie of 2023. The first instalment, Pushpa: The Rise, has garnered a huge fan following. One can expect Pushpa 2 to replicate the success of Baahubali 2 and KGF Chapter 2.

Pathaan marks the return of Shah Rukh Khan to the big screen after a hiatus of four years. It is the fourth instalment in the YRF Spy Universe after Ek Tha Tiger (2012), Tiger Zinda Hai (2017) and War (2019). The  Siddharth Anand’s directional has created a huge pre-release buzz and one can expect fireworks at the box office when the film releases on Jan  25, 2023.

Shah Rukh Khan has teamed up with Tamil film director Atlee for an action thriller titled Jawan. This collaboration has already created a huge buzz on social media. Atlee has a 100% success record at the box office with blockbusters like Mersal, Bigil and Theri to his name. Jawan releases on June 2, 2023.

The third and probably the last movie in YRF’s Tiger franchise will release on Diwali 2023. Salman and Katrina will reprise their respective roles while Emraan Hashmi will play the lead antagonist in the movie. Reportedly, Shah Rukh Khan has an extended cameo in the spy action thriller directed by Maneesh Sharma.

As per IMDB, the film will highlight the uncontrolled use of an illegal backdoor route called ‘Donkey Flight’ by Indians to immigrate to countries like Canada and the USA. The movie stars Taapsee Pannu and will release on Christmas 2023.

Hrithik Roshan and Siddhart Anand are collaboarting again after the grand success of Bang Bang and WAR. Fighter is Bollywood’s first airspace thriller. Deepika Padukone is paired with Hrithik for the first time. It will release on Sep 28, 2023.

The next in the list is an action thriller starring two biggest action stars of Hindi cinema, Akshay Kumar and Tiger Shroff. Said to be Bollywood’s biggest and most expensive action film, Bade Miyan Chore Miyan hits the big screen on Christmas 2023.

Which of these movies are you waiting for? Share your views with us in the comments section.