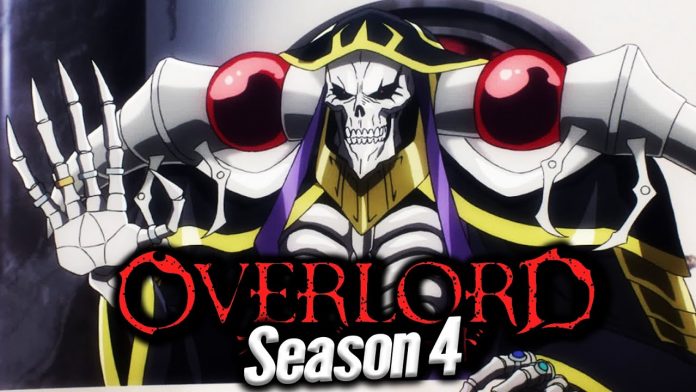 Overlord Season 4: Release Schedule, Number of Episodes & Where to Watch!

Overlord season 4 premiered in Japan on July 5, 2022. Crunchyroll is simulcasting the fourth season across the globe.

Overlord is an Isekai anime based on the Japanese dark fantasy novel series of the same name. The first season comprising 13 episodes premiered on September 29, 2015. The makers followed it up with two more seasons of 13 episodes each. The third season concluded airing on October 2, 2018, and since then the fans are waiting for Overlord season 4.

The fans waited eagerly for more than three years and finally the anime production studio Madhouse confirmed in May 2021 that the fourth season of Overlord was in production.

Overlord will receive a Season 4! & also a movie has been announced!

If this isn’t enough, the studio also confirmed an Overlord movie to be in production. So, when will Overlord season 4 premiere? What will be its story? Here’s everything you need to know.

What will be the plot of the ‘Overlord’ movie?

Madhouse has confirmed that the Overlord movie will adapt the “Holy Kingdom” arc from light novels which cover volumes 12 and 13. The arc sees the Roble Holy Kingdom attacked by the demon emperor Jaldabaoth and his team. Ainz Ooal to challenge him.

What will be the plot of Overlord Season 4?

The anime series Overlord has adapted three light novel volumes each season. There are a total of 16. As discussed above, the upcoming Overlord movie will cover the “Holy Kingdom” arc spanning volumes 12 and 13. So, Overlord season 4 will likely cover volumes 10 and 11 of the light novel series.

The 10th volume titled The Ruler of Conspiracy was released on May 30, 2016. It explains Ainz Ooal Gown’s decision to turn his kingdom into a paradise for all races. Meanwhile, rulers of other countries plan to oppose him and his newly founded nation. Volume 11 titled The Craftsman of Dwarf sees Ainz form an association with the Dwarf Kingdom.

-And The Story Gose On-

How many episodes will be there in Overlord Season 4?

Just like the previous three seasons, the fourth season is going to have 13 episodes each. So, we are expecting season four to cover volumes 10, 11, and some part of Volume 12 of the novel series.

There are a total of 16 novel volumes released to date. Overlord light novel volume 15 was released on June 30, 2022. Volume 16 is scheduled to release on July 29, 2022. The author Kugane Maruyama is planning to finish the novel series with Volume 17.

If the anime follows a strict weekly schedule and doesn’t take any break the Season 4 finale will air on Sep 27, 2022.

Studio Madhouse has animated the novel series quite well for the first three seasons. So, we are expecting them to continue the great work. The trailer looks amazing, and we have high expectations for the next season.

Before Overlord, its crossover series Isekai Quartet was renewed for a third season. Iseki Quartet is a very popular crossover series, with characters from Overlord, KonoSuba, The Saga of Tanya the Evil, and The Rising of the Shield Hero.

Overlord is a Japanese anime television series based on the light novel series of the same name written by Kugane Maruyama and illustrated by so-bin. Studio Madhouse has produced the series with Naoyuki Itō helming it. The original team has returned for the fourth season.

There are two compilation anime films recapping the events from the first season. These were released in Japan on February 25, 2017, and March 11, 2017, respectively. The new Overlord movie adapting the Holy Kingdom arc will release in 2023.

If you want to watch Overlord in English, you can find dubbed episodes on Funimation,  Crunchyroll, and Hulu. All three seasons are available to stream on these platforms. Season 4 English dub premiered on Crunchyroll on July 19, 2022.

Where to watch Overlord Season 4?

Are you waiting for Overlord Season 4? Share with us in the comments section. You can check more details about other animes here.