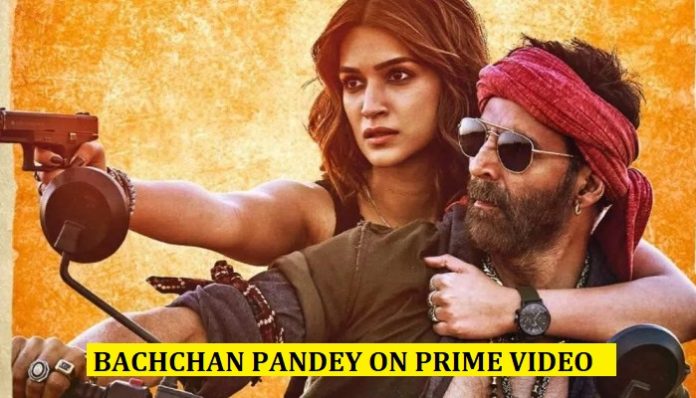 Akshay Kumar and Kriti Sanon will release on Amazon Prime Video. Here’s everything you need to know.

Since Bachchan Pandey is a part of the deal, the Akshay Kumar starrer will make its digital debut on Amazon Prime Video.

Though there is no formal announcement regarding the digital streaming date, our sources have confirmed that the makers are looking for an early release date. As per letsOTTglobal, the producers have re-negotiated with Amazon Prime for a 4-week theatrical window for Rs 80 Crore. Initially, it was six weeks.

The latest we hear is that Amazon Prime has accepted the deal. Bachchan Pandey will make its OTT debut on Amazon Prime Video after 28 days of its theatrical release i.e. on April 14 or Apr 15, 2022.

Bachchan Pandey is an action-comedy movie directed by Farhad Samji is a remake of the 2014 Tamil film Jigarthanda which itself was inspired by the 2006 South Korean movie A Dirty Carnival.

Released on March 18, 2022, Bachchan Pandey opened on a positive note, earning Rs 13.25 Crore on its first day. However, it faced huge competition from The Kashmir Files and finally surrendered at the box office. Anupam Kher starrer was the first choice of the cinemagoers and Akshay Kumar can’t do much about it.

Are you waiting for Bachchan Pandey’s digital release on Prime Video or will you watch the movie in the theatre? Share your views with us in the comments section.