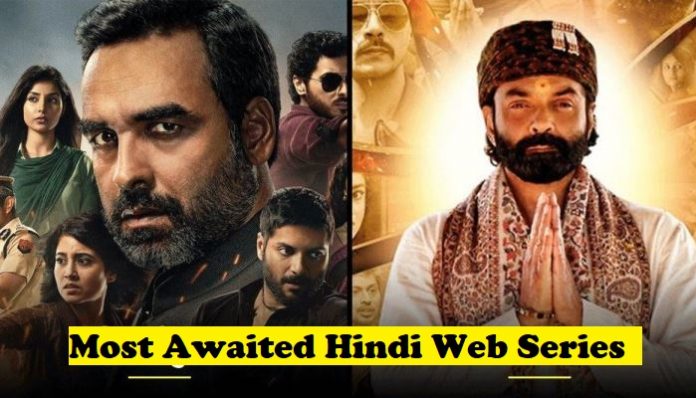 Most Awaited Hindi Web Series 2022 That Are Worth Binge Watch

The viewership of OTT platforms saw exponential growth during the lockdown in 2020. OTT platforms have recorded huge numbers not only in India but in other countries as well. Many web series and films released during the lockdown garnered superb numbers. Talking about the Hindi content, 2020 started with Netflix’s web series Ghost Stories. After it, OTT platforms Amazon Prime Video, Hotstar, Zee5, Alt Balaji, and Voot came with some good content. Special OPS, Asur, Panchayat received huge appreciation and garnered good numbers. The year ended on a high with Sony LIV’s drama series ‘Scam 1992: The Harshad Mehta Story’.

The year 2021 also saw the release of some exceptional stories like Aarya 2, Kota Factory 2, The Family Man 2, and Inside Edge Season 3 among others. We just hope that this year will be as good as the last two, in terms of content and variety of web series. Let’s have a look at the most awaited Hindi web series of 2022.

Mirzapur 3 tops the list. After the blockbuster success of the second season, Prime Video renewed the crime drama for a third season. Fans are super excited for the release of the upcoming season as the previous questions ended on a major cliffhanger. These are lots of questions that remain unanswered in season 2. We may get to see the next season by the end of 2022.

The first season of The Family Man was premiered in September 2019. Starring Manoj Bajpayee and Priyamani, the show received unanimously positive reviews. The fans loved each and every bit of it. Created by Raj Nidimoru and Krishna D.K, it tells the story of a middle-class man secretly working as an intelligence officer for the T.A.S.C, a fictitious branch of the National Investigation Agency.

The first season ended on a major cliffhanger and since then the fans are super excited for the next season. The Family Man 2 premiered on Amazon Prime Video on Jun 4, 2021.

After a hugely successful second season, the fans are now waiting for The Family Man 3 which is definitely on the cards.

Premiered in March 2019, Made In Heaven showcased the lives of Tara and Karan, two wedding planners in Delhi running an agency named Made in Heaven. Zoya Akhtar who co-created Made In Heaven with Reema Kagti confirmed the second season on Instagram. Made In Heaven Season 2 was on the list of 14 shows announced by Amazon Prime Video in January 2020. However, the production got delayed due to lockdown and the show will now premiere in 2022.

The second season of one of the most loved web series of 2020, Panchayat, is expected to premiere in 2021. Starring Jitendra Kumar, Raghuveer Yadav, and Neena Gupta, Panchayat is a comic-drama series that showcases the journey of an engineering graduate. The simplicity and relatable storyline make this light-hearted series a must-watch with family.

Netflix India recently announced its upcoming slate of all the shows and movies set for release in 2021. Much to the excitement of the fans, the crime drama series Jamtara gets a renewal. The first season garnered positive reviews and it would be interesting to see, what lies ahead. We are waiting for the announcement of the official release date of Jamtara Season 2.

The first season of Delhi Crime set in the aftermath of the 2012 Delhi gang rape garnered superb reviews from the critics. The much-loved intense crime drama series is coming for its second season on Netflix. As per the reports coming, the focus will be on a new case in the second season.

Rudra The Edge of Darkness

One of the most loved and controversial web series in the Indian OTT space is Aashram. Starring Bobby Deol in the lead role, the Prakash Jha’s directional received a tremendous response. Now, the fans are eagerly waiting for the next chapter.

Recently, while talking to India.com, Bobby opened up about the next season and revealed that it should be out by mid-2022. He said, “The shooting got delayed because of the coronavirus. I don’t know exactly what date and when but I think it should come around the middle of the year.”

Starring Arshad Warsi and Barun Sobti, Asur is a crime thriller that combines Hindu mythology with forensic science seamlessly. Touted as the first season of India’s first mythological thriller ‘Asur’ received a positive response. It is one of the top-rated Indian web series with an IMDb score of 8.5.

The filming for the third season wrapped up in January 2022. It is expected to premiere in the second quarter of 2022.

One of the top-rated Amazon Prime thrillers Breathe is getting a third season. Abhishek Bachchan, Nithya Menen, and Amit Sadh will return to their respected roles. The filming for the third season began in October 2021. Though the makers haven’t set the release date, it is expected to premiere in 2022.

The third season of Sony Liv’s heartwarming show Gullak debuted on April 7. Once again, the Mishra family returns with their collection of daily life tales every middle-class family can relate to. The critics and viewers are loving the third season and the show is only getting better and more warning with every new season.

After the grand success of Scam 1992, SonyLiv and Applause Entertainment announced the second installment of the franchise titled Scam 2003 based on the 2003 Stamp Paper Scam. Hansal Mehta is returning to direct this one. However, other details are kept under wrap.

The second season of ALT Balaji’s popular crime thriller series Apharan will finally make its debut on March 18, 2022. The previous season of this full-on action crime mystery series was a massive hit. Now, the fans are in for a treat as inspector Rudra Srivastava (Arunoday Singh) sets on a new mission.

So, these are the most awaited Hindi web series of 2022. Which one are you waiting for? Share your views with us in the comments section.