“I was gobsmacked. I absolutely loved it.”

Millionaire YouTuber Lord Aleem gave a schoolboy the ultimate supercar experience when he drove him from school in a £2.5 million Bugatti Chiron.

Lord Aleem set up the experience for the son of a family friend.

Eden Boys’ School pupil Mohammed Tawheed Yasin was told by his father Maj to expect a surprise on his last day of term.

But the 12-year-old was left stunned when the supercar turned up at the school gates in Alum Rock, Birmingham.

Fellow pupils were excited to see the Bugatti, gathering around the motor.

PET specialises in high-end car hire/rental to any location in the UK, providing Lamborghinis, Rolls Royces, Mercedes, Ferraris and Porsches for hire.

It was founded in 2006, starting off by hiring out their first Rolls Royce.

In 2009, as supercars were becoming more popular with the rise of social media, PET began adding supercars to its fleet.

PET provides personalised services from wedding hire to driving a supercar for a weekend. 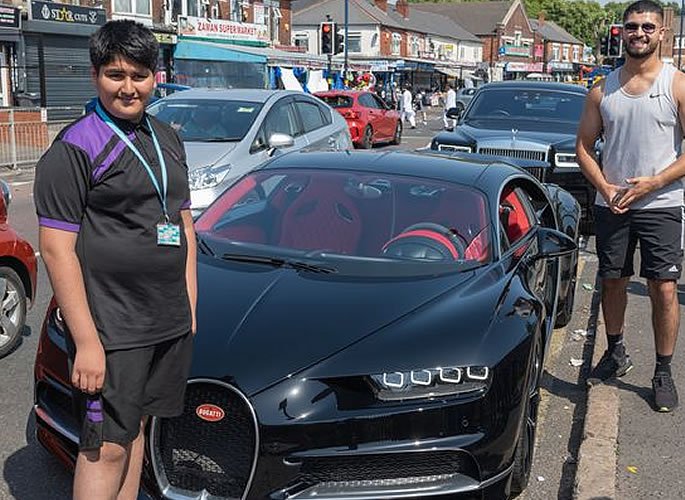 While Mohammed went home in the Bugatti, his schoolbag was driven home by his father in a Rolls Royce Phantom 8 EWB.

The supercar experience was a memorable end to Mohammed’s time in Year Seven ahead of the summer holidays.

He said: “I was gobsmacked. I absolutely loved it.”

“Lord Aleem was there in his Bugatti Chiron to pick my son up. He had no idea about it – it was a surprise on his last day of school.

“I’m a close family friend of Lord Aleem’s family and I also work for the business.

“My son worked very hard this year, his first year at the school. The teachers are really happy with him.”

The Bugatti Chiron has a top speed of 275 mph. There are around six owned in the UK and 500 worldwide.

“The car is very special. The teachers said all the kids were super excited to see it out the window.

“It’s great to show the kids that a dream is possible. You never know who will be motivated by seeing the car.”