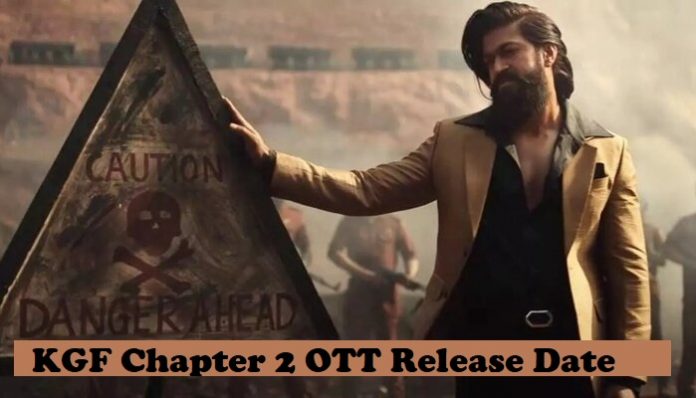 The streaming giant Amazon Prime Video has acquired the digital streaming rights of Yash starrer KGF Chapter 2. The movie has been ruling the global box office and has already grossed Rs 600+ Crore worldwide. The blockbuster movie will stream in Hindi, Telugu, Tamil, and Malayalam languages on Prime Video. However, the official digital premiere date hasn’t been confirmed yet.

Yash fans may have to wait a long for KGF Chapter 2 to arrive on Prime Video. The action entertainer is having a dream run at the box office. So, we aren’t expecting it to make its digital debut after 28 days of its theatrical release, as most releases are following these days. We are predicting KGF Chapter 2 OTT release sometime in June.

Coming back to KGF Chapter 2, it has been on a record-breaking streak since its release on April 14. On its opening day, it crossed more than Rs 200 Crore worldwide. The Hindi version of the movie collected Rs 53+ Crore, making it the highest-grossing opening day grosser in Hindi.

What KGF Chapter 2 is about?

KGF: Chapter 2 is directed by Prashanth Neel and produced by Vijay Kiragandur under Hombale Films. Starring Yash, Sanjay Dutt, Raveena Tandon, and Srinidhi Shetty, the movie is a sequel to the 2018 movie KGF Chapter 1.

KGF Chapter 2 follows the story of Rocky (Yash) who after establishing himself as the kingpin of Kolar Gold Fields, fights against enemies and government officials to retain his supremacy.

The movie has received superb reviews from critics. The audience is loving the movie. On IMDB, KGF Chapter 2 has an exceptional rating of 9.6/10 with 63k+ votes. It is currently the highest-rated movie on IMDB.

The first movie of the franchise, KGF Chapter 1 is streaming on Amazon prime Video. Earlier Allu Arjun’s Pushpa: The Rise made its digital debut on the platform and received an incredible response and the same is expected from KGF 2.