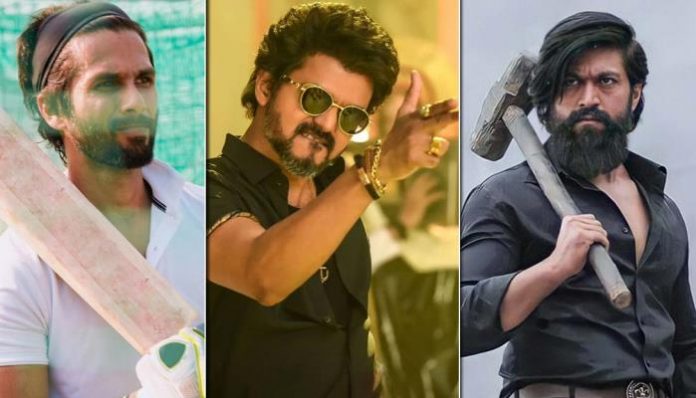 KGF 2, Beast & Jersey: Get Ready For A Blockbuster Weekend At Box Office

Three most-awaited movies are going to release this weekend and the cine-goers can’t be more excited. It is going to be a blockbuster weekend at the box office with three biggies set to clash. KGF Chapter 2 is arguably the biggest release. It will lock horns with Tamil superstar’s action drama Beast. Shahid Kapoor’s Jersey which was one big release a few months ago will look to hold its back. Let’s have a detailed look at these movies.

The biggest theatrical release of this weekend is Yash’s KGF Chapter 2. A sequel to the 2018 blockbuster, KGF, is set to take an earth-shattering opening across the country. The Hindi version of KGF 2 has already grossed Rs 10 Crore on advance booking for the opening day.

Directed by Prashanth Neel, KGF 2 also stars Sanjay Dutt, Srinidhi Shetty, Raveena Tandon, and Prakash Raj. The fans are super excited for this one and one can expect the biggest opening day post-pandemic.

Shahid Kapoor and Mrunal Thakur’s much-awaited movie Jersey will finally see the light of day on April 14, 2022. Directed by Gowtam Tinnanuri, it is a remake of the Telugu movie with the same title that released in 2019. The movie follows the life of Arjun, a 36-year-old man who quit his cricket career when he was young but decides to go back on the field and play for the National team, all for his son’s desire to get a jersey.

Jersey will look the survive the Tsunami of KGF 2. A double-digit opening would be a perfect start for the film.

Next on the list is Tamil superstar Vijay’s Beast. This action-comedy movie is written and directed by Nelson and produced by Sun Pictures. It also stars Pooja Hegde,  Selvaraghavan, Yogi Babu, and Redin Kingsley in supporting roles. The movie around a spy’s quest to rescue people held hostage in a shopping mall by terrorists.

Primitively a Tamil movie, Beast will have a limited release in other languages as well like Hindi, Telugu, and Malayali.