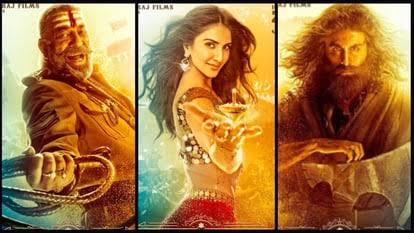 Here’s How Much The ‘Shamshera’ Cast Is Being Paid

The trailer of Ranbir Kapoor’s next movie Shamshera dropped a few hours ago. The viewers are absolutely loving it and calling it the next blockbuster of Bollywood. Set in the 18th century, the epic period drama is one of the most-anticipated movies of 2022. Directed by Karan Malhotra (Agneepath), the movie features Ranbir Kapoor in a titular role of a decoit. The movie also stars Sanjay Dutt, and Vaani Kapoor, among others in key roles.

The movie tells the story of a dacoit tribe fighting against the British. Ranbir (Shamshera) is the leader of this tribe and he is up against a crooked cop Shuddh Singh (Sanjay Dutt). Shamshera looks grand and is mounted on a huge scale. The visual appeal and fight scenes look exceptional. The estimated budget of the movie is around Rs 150 Crore. The salaries of the cast members are also massive. Let’s have a look.

A lot is driving on this movie as it marks Ranbir’s return to the big screen after a long gap of four years. Last seen in Rajkumar Hirani’s Sanju, Ranbir is the heart and soul of Shamshera. According to reports, Ranbir has charged a whopping Rs 20 crore to play the titular role in the movie.

After delivering a superb performance in JGF 2 as Adheera, Sanjay Dutt is once again playing a ruthless character. He is playing the role of main antagonist Shuddh Singh in Shamshera. Reportedly, he has been paid a whopping Rs 8 crore.

Vaani started her career with a Yash Raj’s Shuddh Desi Romance. Last seen opposite Ayushmann Khurrana in Chandigarh Kare Aashiqui, Vaani plays a dancer and Ranbir’s love interest in the movie. Reportedly, the diva is being paid Rs 5 Crore.

Though there is no information about his role in the movie, Ronit Roy has been paid Rs 4 Crore for the film. He might be the surprise package with such a huge salary.

Directed by Karan Malhotra and backed by YRF, Shamshera releases on July 22, 2022, in Hindi, Tamil, and Telugu.

Are you excited to watch Shamshera? Share your views with us in the comments section.