Performer, writer and producer, Hannah Kumari, is stunning in her football-inspired production ENG-ER-LAND.

The gripping one-woman show is set in the 90s. Hannah’s character, Lizzie, is travelling to a match alone after her friends stand her up.

Although the play is not strictly autobiographical, it tackles themes of identity, racism, friendship and working-class masculinity.

The production is beautifully written and performed by Hannah and directed by the fantastically gifted Rikki Beadle-Blair.

With a career spanning over ten years, the originality and diverse skills of Hannah Kumari aim to amplify the voices of women and break down certain stereotypes.

Showcasing diverse experiences, including her own, ENG-ER-LAND is an insightful narrative of overlooked issues within football.

Although there is a blend of culture, sport and discrimination, ENG-ER-LAND remains grounded, relatable and intimate.

The humour of Lizzie, her obsession with Coventry City FC and the excitement of a matchday leave you feeling so engrossed in the play.

DESIblitz had the pleasure of watching ENG-ER-LAND unfold and spoke to Hannah Kumari about certain aspects that she addresses in it. 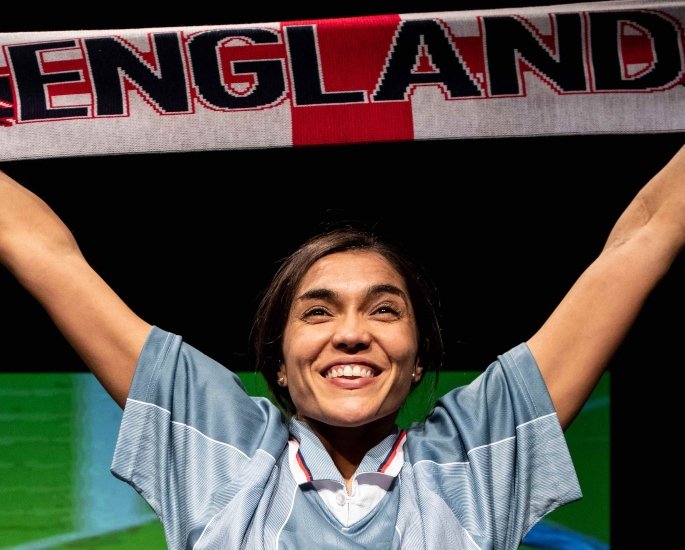 In the wake of the 2020 Black Lives Matter (BLM) protests, Hannah Kumari wrote ENG-ER-LAND. This is after seeing football fans acting in a very anti-social manner.

The protests also played a massive role in the titling of the play as Hannah states:

“The name came from a Facebook post I did in June 2020. I shared a video from The Standard of hundreds of people filling the streets around the Houses of Parliament to ‘guard’ statues.

“It was part of a counter-demonstration against anti-racism protests.

“In the post, I explained that the people in the video were ‘chanting ENG-ER-LAND and throwing stuff at police’. It felt like a good title for the play.”

Feeling frustrated, angry and sad about the contrasting emotions towards racism, she felt compelled to reflect on her own experiences.

As a mixed heritage teenager growing up, Hannah was exposed to the aggressive and discriminatory attitudes of certain people, including football fans:

“The incident that most stands out from my childhood is hearing Ian Wright being severely racially abused at a friendly match at Ibrox.”

Hannah’s character, Lizzie, and her confrontations with racism and identity are at the forefront from the get-go.

Her early interactions with her friends amplify the kind of crisis Lizzie is going through as a mixed heritage teenager.

Whilst waiting for her friends to meet her, she sees the most popular girl in school with her mates starting to approach her.

As a typical teenage girl would, Lizzie gets nervous as she wants to make a good impression.

But, as the popular girl toys alongside Lizzie with microaggressions and brashness, she ends the difficult interaction with a condescending hug and a racial remark.

Confused by the conversation itself, Lizzie seems more overwhelmed with the lack of defence her other friends gave her. This sets the tone for the rest of the play.

However, she treats the audience as her friends, adding an interactive element to ENG-ER-LAND.

It makes the audience’s relationship with Lizzie stronger, wanting to help with her fragile moments whilst embracing her colourful personality as a whole.

Lizzie is impressively knowledgeable about football and her beloved team, Coventry City FC.

She guides you on a typical matchday for her as she is met with late buses, internal conflicts and awkward family conversations.

A standout moment is when Lizzie meets her Indian grandmother at the park.

Revealing she can barely speak Punjabi, it highlights how her Britishness overshadows her South Asian side – a poignant theme throughout the play.

Though, the awkwardness is extremely humorous and uncomfortable, along with being innocent and very familiar for a lot of young British Asians.

As we move on, the inclusion of distinct sounds of buses, market stalls and football chants create an iconic viewing experience.

One of the more emotional moments came from Lizzie bumping into her father and his new girlfriend outside a shop.

Asking her dad if he would come to the match with her, he remains silent even though his girlfriend sees no problem with it.

Considering Lizzie exclaims at the beginning how they both went to games together, this newfound distance shows a disrupted family.

Having said that, her resilience as a character keeps the play ticking. This is one of the more impressive things about the play and the importance it has on football.

It’s almost what keeps Lizzie going considering she constantly faces tense moments like this. As Lizzie finally reaches the game, she meets her uncle Steve. She stays with him and his friends whilst the match starts.

Her kick by kick commentary makes you feel like you’re at the game, as sounds of tussling ring around the stage.

Here, she is also met with hateful stares and a heartfelt ending that fuses all of the plays theatrical and thematic qualities into one big conclusion. 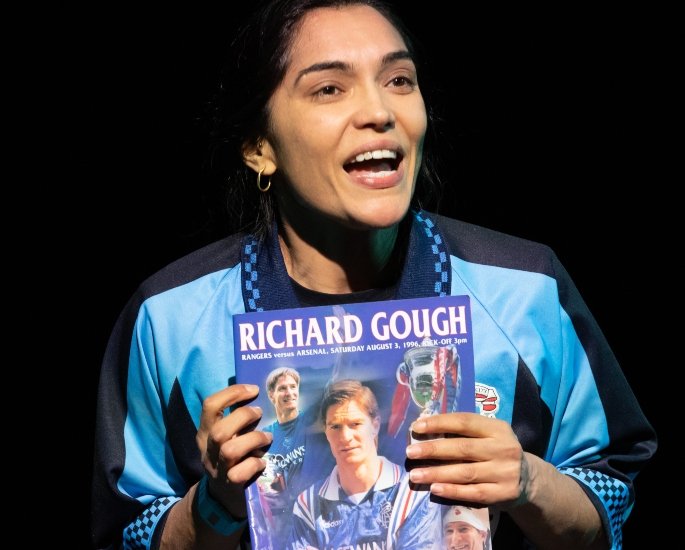 The play explores multiple themes that spread from identity to more prominent issues like racism. Therefore, we see Lizzie faced with numerous situations that leave her feeling confused.

This is highly important and something Hannah wanted to discuss within the play. She wanted to address what defines someone as being British, using one of the most popular sports.

Developing on the relationship between football and identity, Hannah talks about being British:

“This has definitely changed for me as I’ve got older. I was born in England, to a Scottish father and Indian mother, who came to the Midlands as a child.

“I identify strongly with English culture, due to my upbringing, and obviously football is a big part of that.

“But, I think the diversity of Gareth Southgate’s England team has helped redefine the notion of Englishness for some people.

“But there is still a way to go, which is one of the reasons I wrote the play.”

This is quite visible in ENG-ER-LAND. Lizzie’s lack of closeness with her South Asian side is primarily down to her love for British culture.

It is all she knows and is too young to realise there is a clear difference between the two. Her upbringing focuses on that.

She constantly refers to her “tanned” skin, the remarks she gets in school and talks to being white as “pretty”.

This oozes into her thoughts about funny teenage scenarios like getting a boyfriend.

There are moments where she interacts with white boys and wants a white boyfriend. But, this isn’t from a place of discrimination. To Lizzie, this is something completely normal.

Hannah Kumari emphasises this culture clash in the play because it happens in real life:

“Yes, I think culture plays a part in stereotypes. In the UK there is definitely an element of expectation for groups from certain backgrounds to behave in a certain way or like particular things. I hope that is changing though.”

Additionally, the play explores the relationship between women and football.

Lizzie constantly refers to incidents of men staring at her, shouting at players and brawling. The latter, particularly towards the end of the play.

We asked Hannah if attending football matches for British Asian women and women, in general, has become safer:

“Despite ongoing challenges, I think we have seen some progress in it becoming easier. It is safer and more accepted for British Asian women and women, in general, to go to matches.

“Since last Summer The Three Hijabis have been campaigning to make going to football a safer experience for everyone.

“There’s also a female Bradford City supporters group, The Bangla Bantams, who just did a Radio Play for BBC Radio 4.

“They’re supported by Fans For Diversity, who also support ENG-ER-LAND.

“You still hear sexist chants at football grounds and there is a long way to go, but I feel hopeful for the future.”

She goes on to detail how communities can redefine the narrative of women and sport so that people like Lizzie can have better experiences:

“I think it’s about communities coming together, all parts of the community, and supporting each other.

“Allowing people from diverse backgrounds to have the same opportunities as those who have traditionally participated in sports, and offering a welcoming environment.”

Even though Lizzie’s interactions in ENG-ER-LAND are all important in their own right, it’s a journey that she and the audience go on together.

We see her fragility when it comes to understanding her identity. Equally, we witness how she is just a child learning to accept herself.

In a heartwarming section, the audience sees Lizzie accepting all aspects of her British and South Asian cultures.

The distance she once had a feeling of is gone. Like many British Asians, her identity starts forming by embracing all the elements that make her ‘different’. 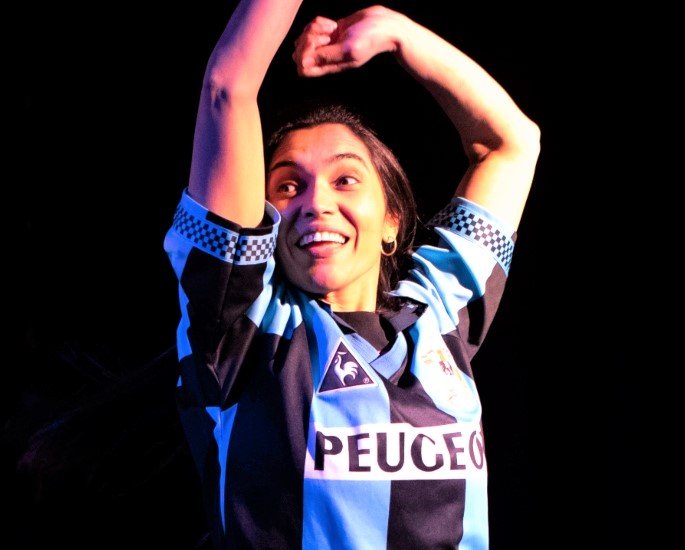 Drawing upon her own experiences as well as exaggerating certain scenarios helps propel the play into this incredible cinematic production.

However, it wasn’t all smooth sailing for the talented performer. Noting the challenges that went into creating the play, Hannah states:

“It can be hard to distance yourself when writing work rooted in lived experience. To keep clear in your mind which of your own experiences serve the story you are trying to tell is hard.

“I found this a challenge but was supported in my writing process by dramaturg Milli Bhatia. She helped me gain clarity around this.

“ENG-ER-LAND is by no means totally autobiographical but it is inspired by things I have experienced and witnessed.”

“It’s also about big issues, which could have been daunting. But I’ve been really supported by all of my collaborators and especially Anwar Uddin, head of the Fans For Diversity campaign.

“I think they are issues which need to be explored theatrically. I have tried to present them in a way which doesn’t make the audience feel that they are being lectured, by using the lens of a teenage girl.”

Overcoming these challenges has proven tough but audiences will agree that Hannah gives a spellbinding performance.

Her effortless choreography, engrossing movements and decadent accents were impressive and artistic.

The way she glides across the stage, keeps eye contact with audience members and comically interacts with herself is so innovative.

Hannah has a gift of the gab in the way she is able to express her emotions in just one expression. The fact ENG-ER-LAND is a one-woman play emphasises just how powerful her performance is.

Capturing the essence of all the characters and interactions through her is so unique and happens seamlessly in the play.

The actress also hopes that audiences will feel a certain way once they have seen the production:

“I hope they’ll have a sense of empathy and shared experience, and reflect on their own behaviour. I hope it will encourage audiences to stand up for others and to move towards being actively anti-racist.”

Addressing controversial topics and difficult conversations, ENG-ER-LAND is a magical tale of one girl’s footballing journey around identity.

Touring over fifteen venues until April 2, 2022, ENG-ER-LAND is a must-see fusion of football, race and culture.

Funded by Arts Council England and The Football Supporters’ Association, Hannah Kumari has done a tremendous job in reliving the story of so many young women.

The play gives onlookers from all backgrounds a glimpse of how important it is to create a safe and inclusive place within sport and society.

Undoubtedly, ENG-ER-LAND is a catalyst in promoting this type of change.