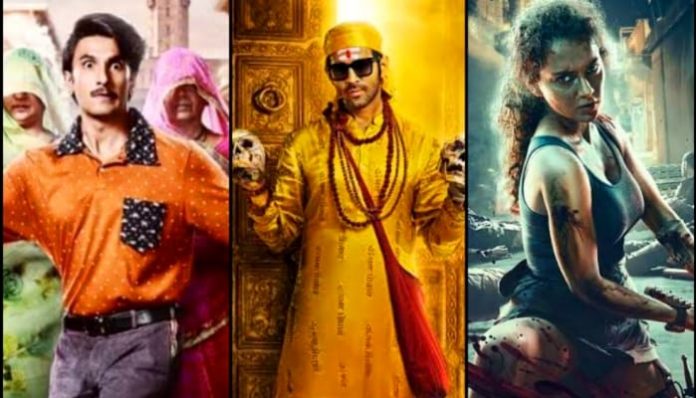 Dhaakad to Bhool Bhulaiyaa 2, Bollywood Movies Releasing in May 2022 in Theatres

Jayeshbhai Jordaar on May 13

Directed by Divyang Thakkar, this social drama movie stars Ranveer Singh in the titular role. he plays the son of a traditional Gujarati sarpanch, who believes in equal rights for males and females. The movie also stars Shalini Pandey, Boman Irani and Ratna Pathak Shah.

Bhool Bhulaiyaa 2 on May 20

Starring Kartik Aaryan, Tabu, and Kiara Advani, Bhool Bhulaiya 2 is a standalone sequel to the 2007 horror-comedy movie Bhool Bhulaiyaa starring Akshay Kumar and Vidya Balan. It would be interesting to see how the movie performs at the box office as the comparison with the original is inevitable.

Bollywood’s badass actress Kangana Ranaut will feature in a full-fledged action avatar in this action thriller. She will be playing a field agent who is on a mission to eliminate Rudraveer, an international human and arms trafficker who has been off the radar for ten years. The movie also stars Arjun Rampal and Divya Dutta.

HIT: The First Case Hindi Remake on May 20

This investigative thriller is an official Hindi remake of the 2020 Telugu movie Hit: The First Case. The movie stars Rajkummar Rao and Sanya Malhotra in lead roles. It is helmed by Sailesh Kolanu who directed the original Telugu version.

After the success of the 2019 crime drama ‘Article 15’, the director-actor duo – Anubhav and Ayushmann have reunited once again for Anek. Ayushmann will play an undercover cop in this political action thriller.

Besides these big releases, other small budget Bollywood movies releasing in May 2022 are:

So, which of these movies are you excited to watch in the theatre? Share your views with us in the comments section.