Deepika Padukone made a statement in her airport outfit as she joined the fellow Pathaan cast to continue shooting in Spain.

She was seen stepping out in a mesmerising all-red Ivy Park X Adidas outfit. Ivy Park is a clothing line owned, managed and operated by American superstar, Beyoncé.

She opted for a comfy turtleneck sweater and faux latex pants. The latter is worth approximately £120 (Rs. 12,000) and features the classic three stripes of Adidas in pink.

Deepika’s turtleneck was full-sleeved but cropped and also bore three pink stripes on the sides of the high neck.

Making a trendy statement, the actress enhanced her look with a red baseball cap and sultry pink heels. 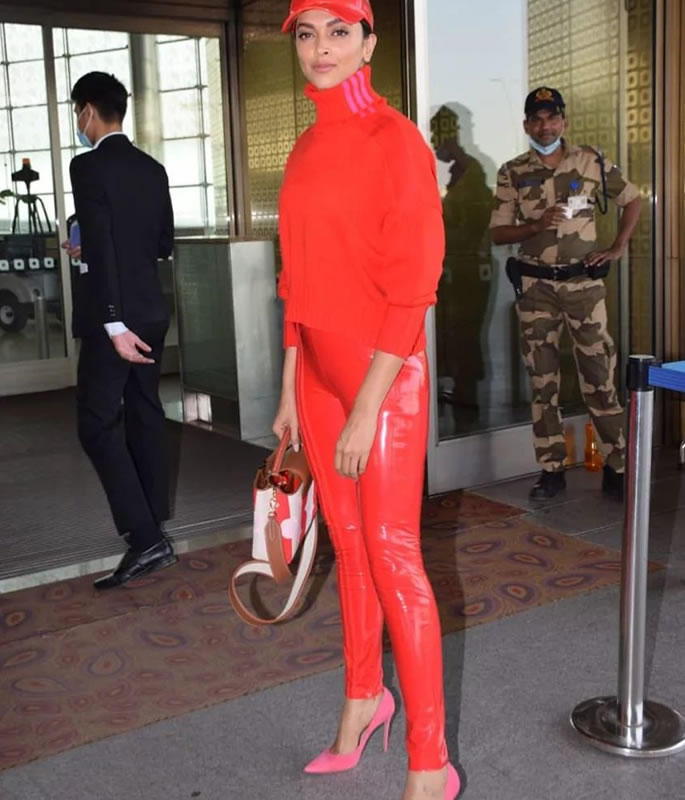 The popular star also carried a brown, white and red Louis Vuitton handbag that contrasted the warm hues of the outfit.

Accompanying the clothes was her glam makeup. Hints of blush, subtle red eyeshadow and a low-tone pink lipstick completed the look.

Deepika gave a part sassy, part sporty vibe and the paparazzi were loving it, along with fans who saw the look via a viral video on Instagram.

“She looks best in every look without any doubt.”

Although one person thought Deepika Padukone was getting influenced too much by her spouse, Ranveer Singh, saying:

“That looks like a SUPER uncomfy airport outfit. Is her stylist now Ranveer Singh?” 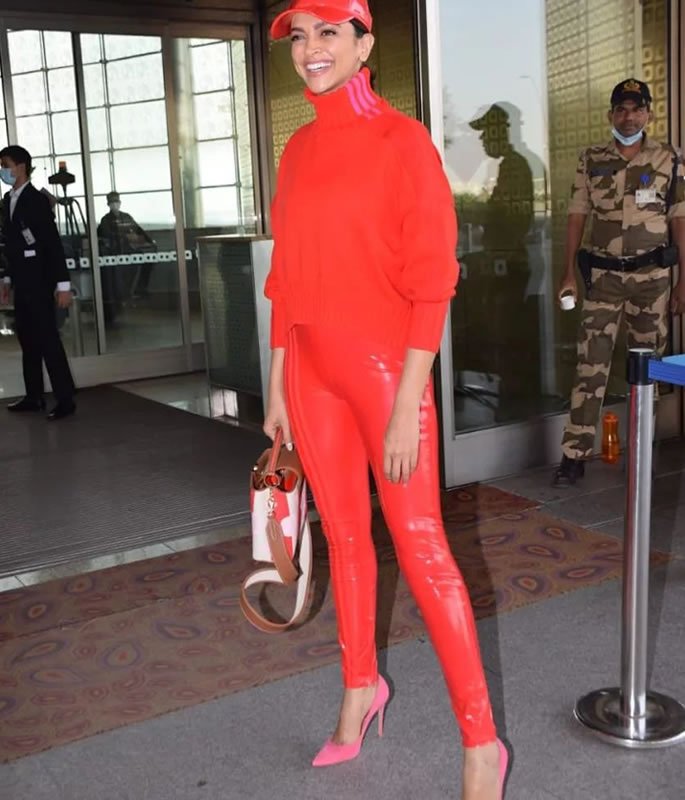 But this trendy red and pink ensemble charmed most fans and Deepika was beaming in delight as she made her way from the car to the entrance.

However, the star is no stranger to chic and monochromatic looks.

She has strutted her stuff in all-blue sweatsuits, classic all-black looks or even green co-ords matched with a plaid trench coat.

Whether it’s a flowy and tonal shirt and leggings or cuffed blue joggers with a lime jumper, Deepika Padukone can rock it all.

The cast members were heading out of the Mumbai airport to start their month-long schedule of filming.

As soon as Pathaan was announced in March 2022, fans have been excited to see the trio in the film which Siddharth Anand is directing.

Pathaan is set to release in January 2023 and is produced by Yash Raj Films.