it is likely that their prices will not be that expensive.

FIFA 23 is just around the corner and with it comes Ultimate Team, arguably the game’s most popular game mode.

This means gamers will have to start thinking about their squads.

Given that it will be the start of the game, many gamers will be lacking coins.

And while that means the likes of Lionel Messi and most Icons will be out of reach, there are still plenty of players that are cheap and good quality.

A huge pool of players means there is an opportunity to build unique teams and with the new chemistry system, this has never been easier.

But this can cause a dilemma for some, resulting in players sticking to one league.

The most commonly used leagues in Ultimate Team are the Premier League, Bundesliga, La Liga, Serie A and Ligue 1.

With that said, here are some squads that will be budget-friendly and will help you compete against fellow gamers at the start of the game. 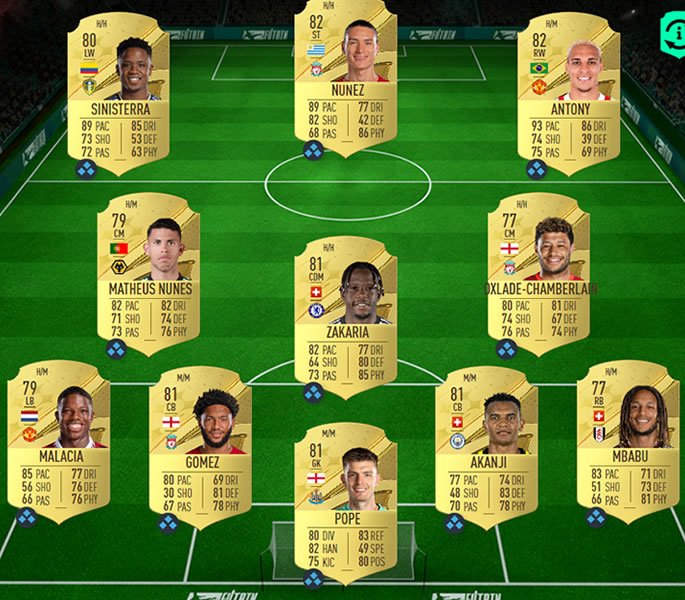 When it comes to choosing players for your Ultimate Team, the most common option is visiting the Premier League.

This is because there are many overpowered cards to choose from.

As a result, the players are more expensive than options from other leagues. But if you have a decent amount of coins to spend, here is a budget-friendly team to consider.

The likes of Kevin Mbabu, Joe Gomez and Alex Oxlade-Chamberlain have always been starter squad options in Ultimate Team and this is no different in FIFA 23.

New Manchester City signing Manuel Akanji looks to have a solid combination of pace and defending for the start of FIFA 23.

The likes of Manchester United’s Tyrell Malacia and Antony could prove useful in both the defence and attack.

The midfield trio looks to be a well-rounded one, with Denis Zakaria offering good pace, defending and physicality for your Premier League starter squad.

Upfront is new Liverpool striker Darwin Núñez who may be a common sight in other people’s starter squads. Not only does he have good pace and shooting but he also looks to boast good strength to help shrug off defenders. 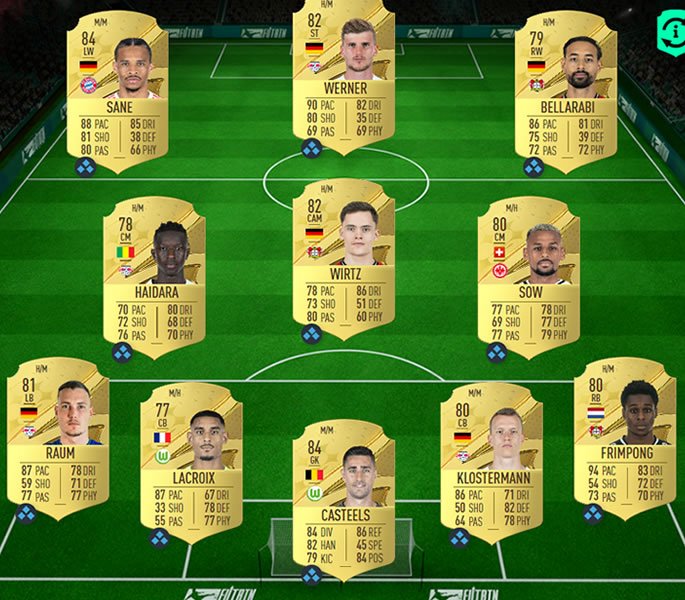 The Bundesliga is a popular option to look at because there are many cards which are both cheap and high-quality.

The transfer window has seen many new faces join the league and with that comes more options for FIFA 23 Ultimate Team.

Here is one team to check out.

Because the Bundesliga is generally a cheaper league option than the Premier League, you can afford to buy higher-rated cards at the start of FIFA 23.

Players like Koen Casteels and Leroy Sane may be 84-rated but it is likely that their prices will not be that expensive.

The defence is likely to be the most expensive element of the team as each player is blessed with pace, something that can give you a major advantage in Ultimate Team.

The CB combo of Maxence Lacroix and Lukas Klostermann is a solid pairing but if they exceed your budget, there are plenty of good alternatives.

This well-rounded midfield has a good combination of attack and defence.

Meanwhile, Timo Werner returns to RB Leipzig and will be in a lot of starter teams which is no surprise given his pace.

There are other Bundesliga players to consider such as Nico Schlotterbeck, Emre Can, Noussair Mazraoui, Ridle Baku and Ryan Gravenberch. 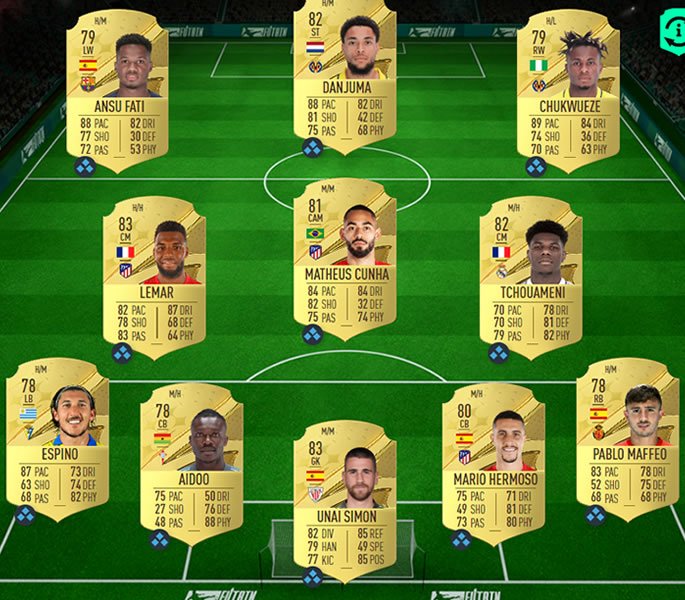 La Liga is one of the most popular leagues in FIFA 23 because there are many top players as well as cheap cards for your starter squad.

When it comes to a budget-friendly squad that can compete with others, here is an option to consider.

The defence features fast players that also know how to put in a tackle.

Atletico Madrid’s Mario Hermoso has good stats and will be much cheaper than the likes of Eder Militao.

Real Madrid’s new signing Aurélien Tchouaméni may be surprisingly cheap compared to other midfielders but has well-rounded stats that may be the difference between winning and losing.

His rating of 79 will bring his price down but his stats indicate that he is better than his overall rating suggests.

If these players do not suit your playing style, there are a number of alternatives such as Ángel Correa, Saúl, Alex Moreno and Eduardo Camavinga. 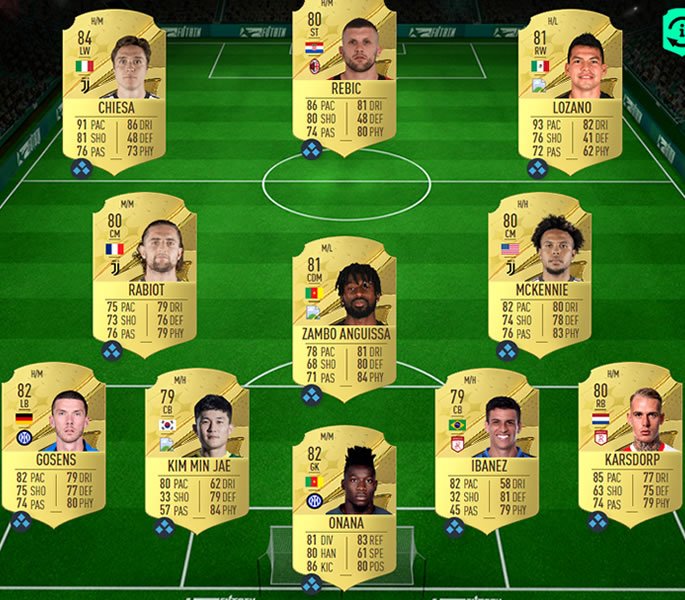 Serie A is interesting for the start of FIFA 23 Ultimate Team.

So by opting for Serie A players, you could save yourself some coins.

For instance, the CB pairing of Roger Ibañez and Kim Min-jae have at least 80 pace, meaning they should have no problem catching fast strikers.

While Robin Gosens is not the fastest LB, he is well-rounded, plus he can be played at LM if you prefer.

The midfield has a nice blend of attack and defence, with each player having well-rounded stats.

But it is the attack which could give you success early on.

The combination of Hirving Lozano and Federico Chiesa could give defenders problems with their blistering pace.

While Lozano could use his agility to get past defenders, Chiesa’s shooting stats make him a threat in the box.

The addition of Ante Rebi? will only make things better.

While the best players come from PSG, there is still an abundance of good Ligue 1 options that will not take up too much of your hard-earned coins.

Many of the Ligue 1 players that do not play for PSG tend to be very cheap, with some costing 1,000 coins or even less.

A solid defence consisting of Jonathan Clauss, Jean-Clair Todibo and Nuno Mendes will be a budget-friendly selection of players.

Nordi Mukiele is originally a RWB and with 78 pace, that might be too slow but he becomes a fast CB thanks to his alternate position.

Jordan Veretout is a great CDM option as his stats are very well-rounded.

The additions of Vitinha and Seko Fofana are ideal starter options in the midfield.

In Ultimate Team, fast wingers are a must and Gelson Martins and Martin Terrier are two players you might want to consider.

In an ideal world, you would have Kylian Mbappe as your striker but he will be far too expensive for the majority of FIFA 23 players, especially at the beginning.

Fortunately, someone like Jonathan David is a good choice as he has good pace and shooting.

When it comes to alternative options, consider the likes of Corentin Tolisso, Carlos Soler, Kasper Schmeichel and Andy Delort.

This will hopefully provide some inspiration when it comes to building your first team on FIFA 23 Ultimate Team.

There are many more players to check out from outside the five main leagues.

You may also think about building a team using players from a number of leagues and with the new chemistry system, it will be easier to do.

Ultimately, it is up to you to decide what players will suit your playing style.