A number of startling allegations have come to light against Ayeza Khan, including claims that she sabotaged her brother Ahad’s wedding.

The allegations were made by his ex-fiancee Aruba Tariq.

Aruba said that she and Ahad were in a serious relationship after meeting on social media. Afterwards, Ahad proposed to her.

She went on to claim that wedding preparations were underway but she decided to call off the wedding after Ahad turned out to be a “dishonest person”.

Aruba’s post read: “The truth behind Ayeza Khan and her brother Ahad Khan.”

Claiming that Ahad lied about his education, Aruba said:

“Ahad lied to me about his education. He has no degree yet he claimed he had a degree in business.”

She also alleged that Ahad depended on his actress sister for financial support. 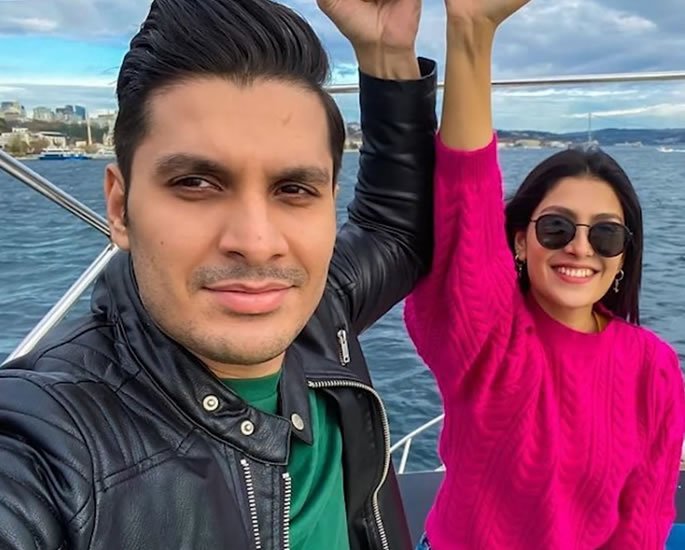 “His sister Ayeza Khan is a ‘celebrity’ who pretty much controlled my wedding, she controls everyone in the family.

“You can’t even breathe without her approval.”

The shocking allegations continued, with Aruba claiming that the actress used to taunt her.

She said Ahad was once in a relationship with actress Sarah Khan. Ayeza allegedly mocked Aruba, saying that her brother could have married a more successful woman.

The post also accused Ayeza of talking about people behind their backs, including her in-laws.

“She talks so much crap about people she works with and for. I want people to know who she is.

“I hate to say this but she is a terrible mother who never looks after her kids.

“Her siblings live with her and her mother takes care of her kids. She hates her in-laws and is always talking s**t about them too. Straight up fake!”

“Ayeza Khan’s family is full of crap and cheaters and liars.

“These people don’t even treat their servants nicely (none of them last more than a few months), they are so disrespectful to them and look down on literally everyone.

“Kicked out one of their chefs because of his religious beliefs. He was literally shaking while serving food because he was so scared and he was gone the next day.

“It was horrible to witness that. Just disgusting!”

Despite the accusations, Aruba stated that Ayeza’s husband Danish Taimoor was “a good man”.

Blaming Ayeza for her marriage to Ahad not happening, Aruba added:

“Ayeza Khan is the core reason behind her dysfunctional family and also behind my relationship issues (besides them being liars).

“I still get panic attacks after seeing a picture of her (thanks to the PTSD her and her family has given me).

“But I’m strong and I will get over this soon thanks to my family and friends.”

The accusations have divided opinion on social media.

Some claimed that Aruba was seeking publicity.

One said: “Now here comes another typical culture-based breakup. Learn to respect your ex and the family involved. Some publicity stunt.”

Another said: “Exes who go and b***h after the breakup are the worst form of humans to exist.”

However, others believed Aruba was telling the truth.

“I’m really not surprised. I never see her doing any charitable work or supporting any causes.”

“Once she refused to do work for an NGO, saying that if she does one, other NGOs will expect help from her.

Another said: “I think we should all support the victim, instead of seeing the image of Ayeza, which is in front of the camera.

“We don’t know her behind the camera. So I think the victim may be telling the truth.”