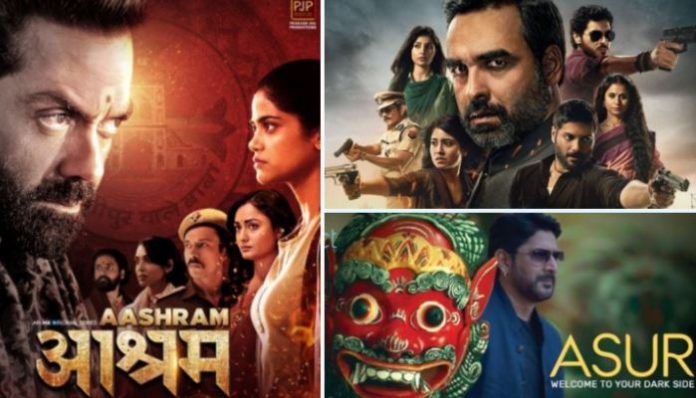 Aashram 3, Mirzapur 3, Asur 2, Jamtara 2 and many more sequels of the Hindi web series are all set to premiere this year.

OTT platforms have been the number one source of entertainment for the last couple of years. The viewers have been treated with some mind-blowing web series over the past few years. Sequels of some of the most loved Hindi web series will arrive this year. Let’s have a look.

One of the most loved and controversial web series in the Indian OTT space is Aashram. Starring Bobby Deol in the lead role, the Prakash Jha’s directional received a tremendous response. Now, the fans are eagerly waiting for the next chapter.

Well, the teaser is out and the long wait to watch Baba Nirala on screens is finally over. Aashram Season 3 premieres on MX Player on Jun 3, 2022.

Set in the heartland of UP,  Mirzapur is among the top-rated and most popular Hindi web series out there. Season 1 arrived in 2018, and season 2 was released in 2020. Soon after the premiere of the second season, the creators announced the third season. The filming has commenced and one can expect the next chapter to release by the end of 2022.

In March 2021, Netflix India announced its slate of movies and shows set to release in 2021. Jamtara Season 2 makes the cut in the list. One can expect the second season to release in 2022. The show is based on crimes related to online fraud.

One of the top-rated Amazon Prime thrillers Breathe is getting a third season. Abhishek Bachchan, Nithya Menen and Amit Sadh will return in their respected roles. The filming for the third season began in October 2021. Though the makers haven’t set the release date, it is expected to premiere in 2022.

Season 1 of The Family Man debuted in 2019 followed the season 2 in 2021. After the glorious success of the first two seasons, Amazon Prime Video has renewed the spy thriller for the third season. As per the reports, the third season will be linked to the COVID-19 pandemic. All the lead cast members will return for the next chapter. Season 3 is expected to premiere in 2023.

Starring Arshad Warsi and Barun Sobti, Asur is a crime thriller that combines Hindu mythology with forensic science seamlessly. Touted as the first season of India’s first mythological thriller ‘Asur’ received a positive response. It is one of the top-rated Indian web series with an IMDb score of 8.5.

The filming for the third season wrapped up in January 2022. It is expected to premiere in the second quarter of 2022.

Delhi Crime won an International Emmy for the Best Drama Series, the first for an Indian show. The show is now soon returning for season 2. Actress Shefali Shah, who plays DCP Vartika Chaturvedi, will return to reprise her role. It is said that the second season will be based on Nithari serial murder case.

Starring Jitendra Kumar, Raghuveer Yadav, and Neena Gupta, Panchayat is a comic-drama series that showcases the journey of an engineering graduate. The simplicity and relatable storyline make this light-hearted series a must-watch family entertainer. Panchayat Season 2 will premiere on Prime Video on May 20, 2022.

Which of these returning shows are you excited about? Share your views with us in the comments section.