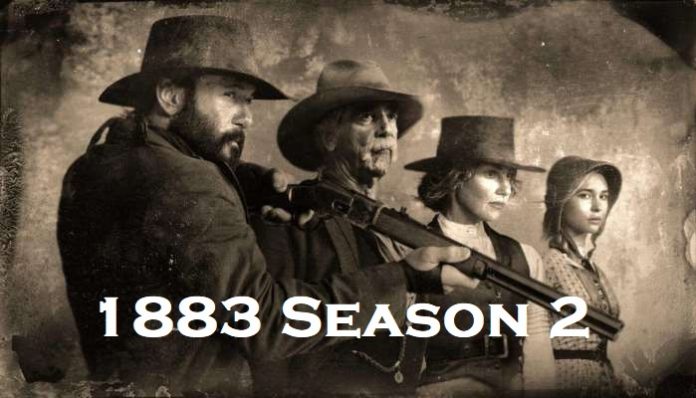 Will there be a second season to Yellowstone’s prequel 1883? Here’s everything we know.

‘1883’ by Taylor Sheridan, a prequel to his series ‘Yellowstone’, premiered about 4 months ago. The limited series comprised 10 episodes in all, started streaming on December 19, 2021 and wrapped on February 27, 2022. It follows the story of the Duttons who came to own the land that would have become the Yellowstone Ranch. Later, the series also killed off some of the main characters. Now fans have been keenly waiting to hear about ‘1883’ Season 2. Well, let’s see what we have for you.

‘1883’ was never supposed to get a second season, rather a one-season limited series. Even though Paramount ordered “additional episodes” on February 15, they never commented if there will be a second season. The executive producer of ‘1883’ and Yellowstone, David Glasser stated in a recent interview that the fans should not expect another season of ‘1883’. Further, he also said that the story will continue, however. Although he didn’t say when or in what form the episodes will come out, guess it’ll be followed by a sequel series.

Yes, Paramount announced another prequel in the Yellowstone franchise, ‘1923’, which will be a sequel to ‘1883’. Sources suggest that it’ll revolve around the Dutton Family facing the Western Expansion, the Great Depression, and Prohibition. So it’s quite a possibility that the story will continue with the upcoming series ‘1923’ itself. As stated by David Glasser himself, “If you’re a fan of the Dutton family and the saga bringing you to the current day (portrayed in ‘Yellowstone’), what will come is that continued saga.”

It’s hard to say for now as there’s no official word on that yet. The fact that the series ended in a perfect way with no cliffhangers, suggests that there won’t be a second season of ‘1883’. Also, as the executive producer, David Glasser suggested, we shouldn’t expect a second season. The “additional episodes” that Paramount ordered in February, are more likely to be followed in another spin-off series, ‘1923’. It will probably serve as a sequel to ‘1883’ as well, set up 49 years in the future. When? Well, we will have to wait for whatever’s coming, maybe at the end of the year or in 2023.

As we already mentioned, ‘1923‘ is another prequel spin-off series in the Yellowstone universe. The creator of the series, Taylor Sheridan recently stated that ‘1923’ is going to be a, “peek through a different window into a different era.”

He also said, “My goal with the next one would be that you could never have seen 1883 or Yellowstone, and still have a fully realized experience as a viewer.” It’s clear from this that there’s a lot more coming our way.

There isn’t enough detail available about the series, though the plotline says that we’ll see a whole new generation of the Dutton Family “during the time of Western Expansion, Prohibition, and the Great Depression.

About the cast, it’s pretty obvious after the finale of ‘1883’ that Sam Elliott and Isabel May won’t be appearing in the new spin-off series. New faces will be introduced as there will be a new generation of Duttons. Although, John Dutton Sr. is more likely to appear in the series, however, it won’t be played by the same actor.

Meanwhile, Paramount has already ordered Yellowstone Season 5. The super-sized season is would premiere by the end of this year. Besides this, the Yellowstone Universe is expanding with spin-offs like 1923.