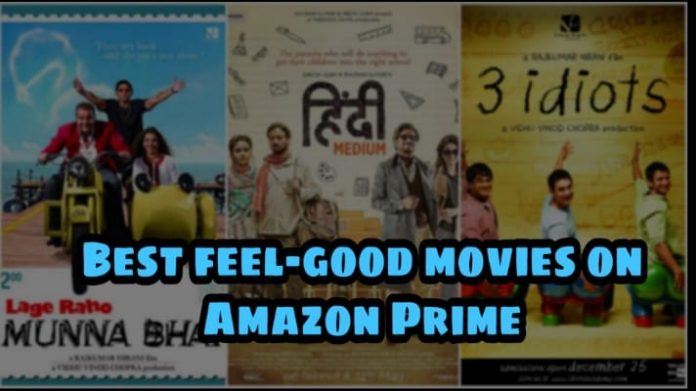 15 feel-good Bollywood movies on Amazon Prime Video: We have compiled a list of movies which may help you find the peace of mind.

In recent times, we have witnessed a growing obsession in the industry for the crime, thriller, action and dark genre. However, many times we feel low and need a refresher. So, we have compiled a list of movies with the intention of giving you and your family a few moments of sheer joy and gratification. It may help you find the peace of mind which is being missed by most of us today. So let’s take a chill pill and let the countdown BEGIN!!!

It is a story about family, household, society and responsibilities. A housewife named ‘Sullu’ who sometimes criticized by her parents and in-laws for not being highly educated but is living happily with her family and then due to circumstances, she has to take up the profession of a Radio Jockey.

The story revolves around the challenges in her new profession and the way she deals with it. Definitely, a movie that you can enjoy with your family and witness some great performances by the entire cast.

The family comedy is an adaptation of a famous Gujarati play featuring two of the most acclaimed legends of Bollywood Amitabh Bachchan and Rishi Kapoor. Big B is 102 years old but still enjoying life to fullest with sheer optimism, on the other hand, his 75-year-old son played by Rishi Kapoor has embraced his old age and has developed a gloomy temper following which his father keeps a few conditions which the son to oblige with if not he would be sent to an old age home. Watch the movie to know what those conditions were and the challenges he had to face.

Three individuals of a completely different mindset (one an IT professional, second a young adventurous and audacious girl and the other very poetical and expressive) are out on a road trip not with an intention of a picnic or enjoyment but because of an extremely peculiar fate of theirs. The three share their experiences and learn the most important life lessons while facing several challenges during the road trip. A must watch for travel freaks.

This movie has received various awards including best film award at the Berlin Film festival and an Oscar nomination. The is about a boy named Nutan who changes his name to newton due to an interesting incident and Newton since then follows his set of laws about life. He ironically gets a government job and is posted at a Naxalite affected zone(the struggle is real) to conduct free and safe polling for the elections. Watch to see the problems faced by Newton and witness the sheer brilliance of these actors.

A remake of the Malayalam film ‘Salt Mango Tree’. It is the story of an affluent couple who want their daughter to study in a top-notch English medium school in New Delhi and are ready to spend any amount of money and effort but face difficulties because of not being fluent in English. They are presented with a scheme of getting the seat an underprivileged student illegally and having no other option they decide to for it which they land in trouble.

The Bollywood Comedy movie won the National Award and also Won 17 Awards that year. Munna who is a Don in Mumbai city hopelessly falls in love a beautiful female RJ and pretends to be an honest man in front of her. When the truth is revealed she feels hurt and abandons him but this incident transforms his life completely forever. There are some brilliant pieces of acting to witness in this movie.

This is a story about a shy guy named prem who runs a tape recorder shop. Sandhya is about to carve a niche for herself as a teacher. The movie touches upon the nuances and certain aspects of an arranged marriage. The story revolves around the journey of a doubtful husband to extremely supportive one, helping his overcome the fear of English and later in many other ways, realising that unbreakable bond that held them together.

A struggling Mumbai street photographer pressured to marry by his grandmother persuaded a young shy girl to pose as his fiancée during a family visit. Their point of views and backgrounds are completely different and there is a huge discrepancy in their compatibility but still, there is some sort of gravity created between
them as the story progresses and ignites a sense of funny romance as seen in the lunch box.

Sonu and Titu are childhood friends. Titu has always been an emotional fool who easily falls in love with anyone without getting into any kind of introspection but Sonu compensates for it and protects him from the Judas kiss. When a girl named sweety tries to woo Titu, Sonu gets a wrong perception about her and the game of doubt begins causing a rift between the two buddies.

The first instalment of the ‘Munna Bhai’ franchise is the story of a ‘Don’ who decides to become a doctor prove himself and avenge his father’s disrespect caused by the Dean of that Medical College. This movie popularized the term ‘Jaadu ki Jappi’ which is widely used even today. Considered to Sanjay Dutt’s best performance in his entire career.

The story of a failed businessman named Aditya who is considering to commit suicide, but his coincident rendezvous with a young talkative Punjabi girl name ‘Geet’ completely changes his life and makes him a successful man and gives a purpose to his life.

The word Hera Pheri means foul play and the movie is the story of the foul play of a terrible but hilarious trio of Raju, Babu Rao and Shyam. A comedy movie and a family entertainer that one can never get bored of.

Considered way ahead of its times, Dil Chachta is a complete entertainer. It is the story of three college friends who are later separated from each other due to their different perspectives about life and relationships. We get to see a depiction of many different mindsets and ideologies in the same movie, therefore, relatable for the masses.

If you liked the cool chemistry between three friends in Dil Chahata Hai, you are surely going to like the bonding of three friends in this movie too. The three friends go on a road trip to Spain with the intention of a reunion but it actually changes their perspective about life.

A movie that has inspired and changed the lives of thousands of youth in this country. Three friends recall the unforgettable memories of their engineering days and how those experiences taught them the greatest lessons of their life.

Pick any movie from the list and we ensure you cherish every moment of it with your family. These were the feel-good movies post-2000. You can also check the list of cult-classic comedy movies of Bollywood.

Well, we tried our best to compile this list. If you have recommendations, please share with us in the comments section.