The scene continues with Rani still drunk on wine.

Many fans will have come across different wine scenes when watching Bollywood films.

These scenes may be of interest to wine lovers, especially those who drink red.

Besides parties, some of these wine scenes are shot outdoor as well, spanning different eras of Bollywood

Many top actors star in these wine scenes, mostly in a twin or group setting. 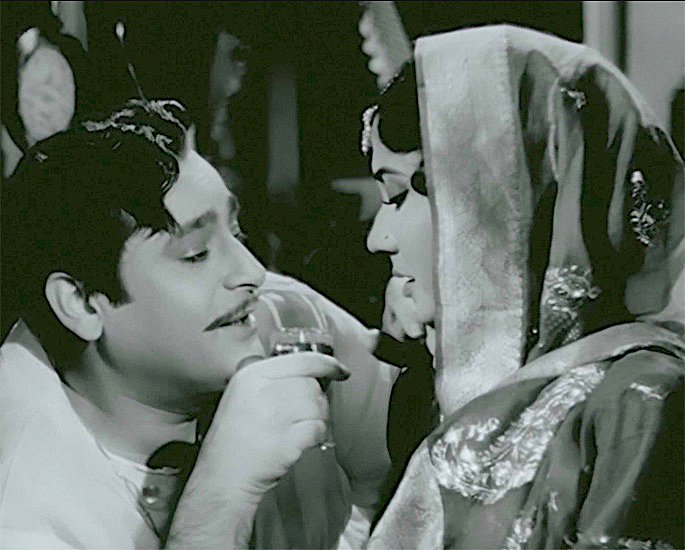 Sahib Biwi Aur Ghulam is a Guru Dutt production, featuring one of the most vintage wine scenes.

In her home, Choti Bahu (Meena Kumari) is seen being forced to have wine by her husband, Chote Sarkar (Rehman Khan).

Choti Bahu is under the impression that she should do everything as per what Chote Sarkar says.

Hence, she willingly drinks wine in this black and white scene from the film. This particular scene can be seen midat in the film. 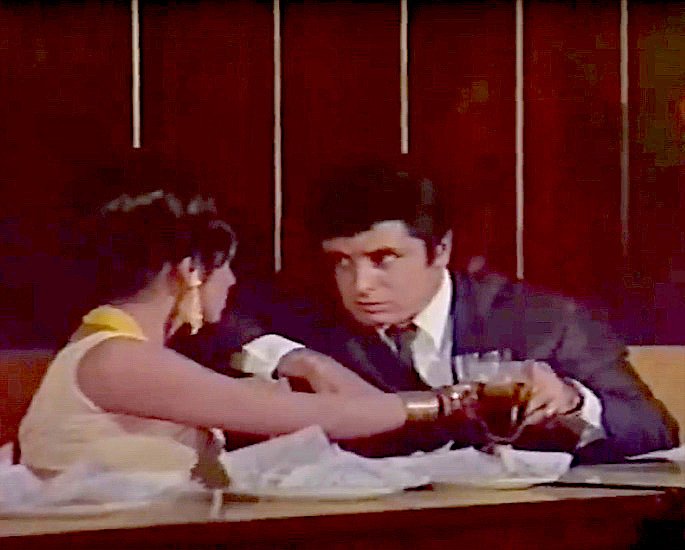 The Bollywood thriller, Intaqam features one of the most iconic wine scenes.

The bar scene in question shows Indu (Anju Mahendru) consoling her friend, Rajpal aka Raju (Sanjay Khan) who is suffering from heartbreak.

Indu tells Raju to stop drinking as she cares for him as a friend. We also learn that Indu loves Raju but he has fallen for someone else.

Raju tells Indu that he is grateful for her love and care but also that she should not deceive herself. 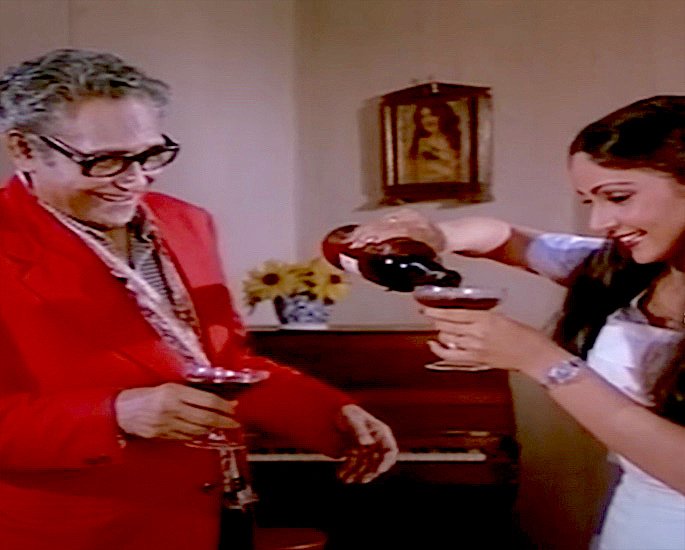 The comedy film, Shaukeen showcases one of the most liberating wine scenes, starring the female lead and lecherous character trying to revive his youth.

The scene is set in a hotel bedroom with Anita (Rati Agnihotri) bringing wine and two glasses for the old, Om Prakash Chaudhary (Ashok Kumar).

She pours wine for both and the two continue to drink and then sing a song.

This wine scene depicts the liberal modernity of the woman in India and how men perceive modern women who drink to be easy.

Om, along with Jagdishbhai (Utpal Dutt) and Indrasen aka Anderson (AK Hangal) tries to have sexual relations with Anita on the pretext of wine.

However, Anita knows how to tackle sexism with kindness. 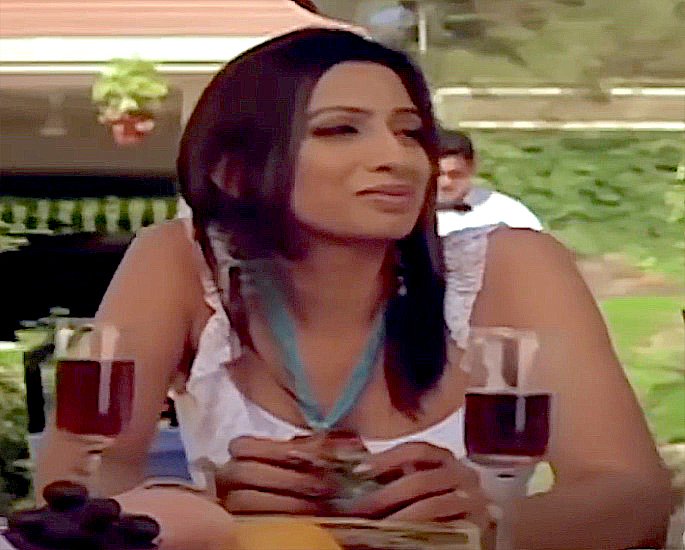 The drama Page 3 has a Mumbai specific focus, reflecting the culture of the title and the city’s media.

A small get together by friends in a restaurant is the setting for a scene, featuring wine on the table.

In the scene, entertainment journalist, Madhavi Sharma (Konkana Sen Sharma), apologies to her client, Anjali Thapar (Soni Razdaan) for not being able to publish a story due to some reasons.

Anjali tells her that she has forgotten about that incident and is happy with life, marriage and her two kids. 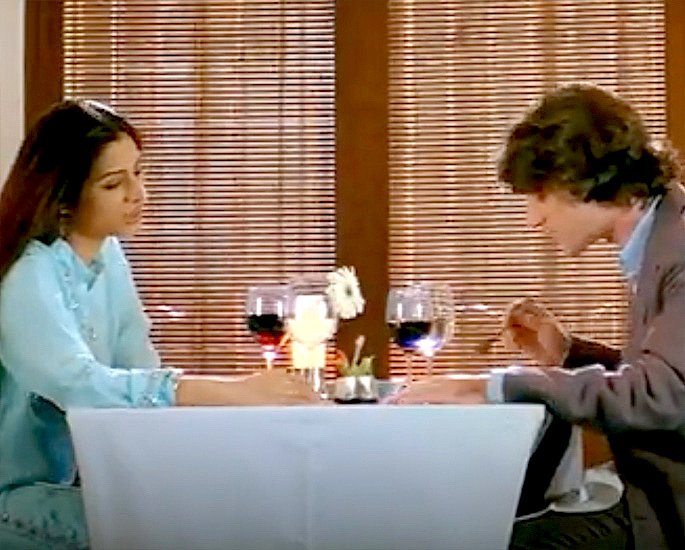 Cheeni Kum is a rom-com film, containing one of the most undercover wine scenes of Bollywood.

His love interest Nina Verma (Tabu) visits the restaurant. Buddhadev spies on Nina as he spots her with another man having wine and lunch.

As an act of jealousy, Buddhadev assumes that Nina commits to this other man. 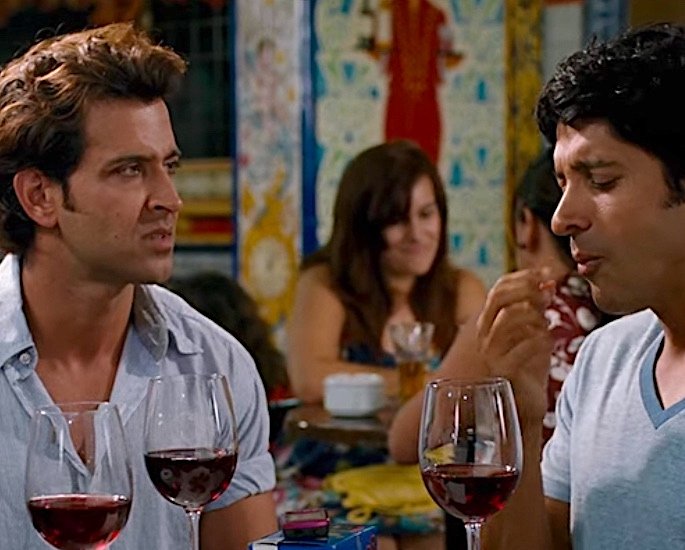 Zindagi Na Milegi Dobara is a fun film, which includes one of the most popular friendship wine scenes shot in Spain.

As Kabir mentions that they are in Costa Brava for “deep-sea diving”, the trio toast a glass. However, Arjun expresses his phobia about this.

This scene very freely showcases a grown man’s insecurity with deep diving over a glass of wine. Kabir, meanwhile, motivates him to face his fears in a scene that also has some humour to it. 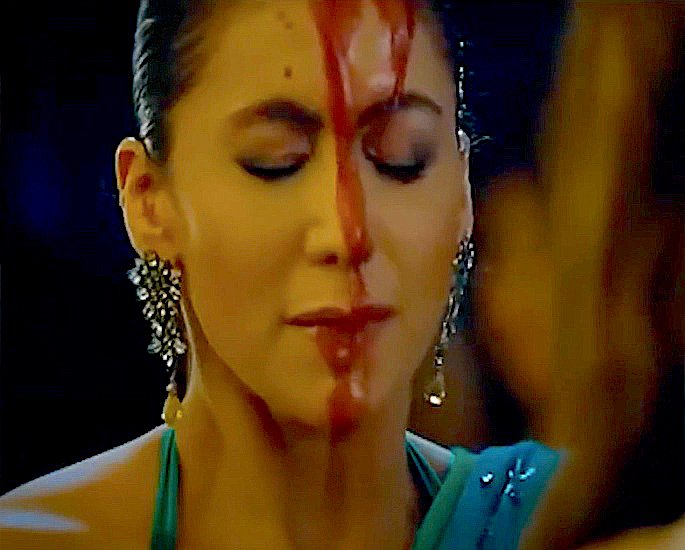 Heroine is a dramatic film, featuring one of the most interesting party wine scenes. It involves the lead character of Mahi Arora (Kareena Kapoor), an actress who goes from the top to the bottom.

There Mahi orders a glass of wine, meeting some friends and her boyfriend. As Mahi is about to leave she is interrupted sarcastically by Isha.

Mahi gets angry with Isha and throws a glass of wine on her head. 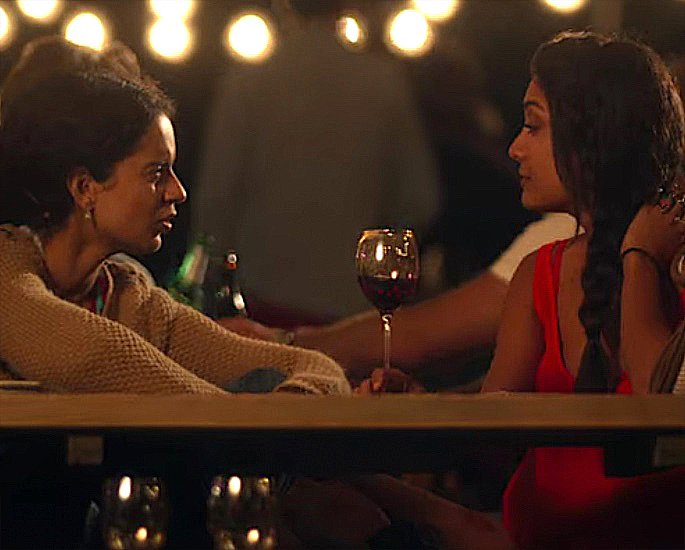 The comedy-drama Queen has one of the most painful wine scenes relating to a relationship.

Rani Mehra (Kangana Ranaut) gets drunk on wine in a bar. This is to battle out the pain of her fiancé, Vijay Dhingra (Rajkummar Rao) leaving her before marriage.

The scene continues with Rani still drunk on wine. People around listen to Rani’s rant about her struggles.

She keeps on ranting until her new friend, Vijayalakshmi (Lisa Haydon) joins her with a glass of wine. Vijayalakshmi also then listens to Rani who carries on speaking her mind. 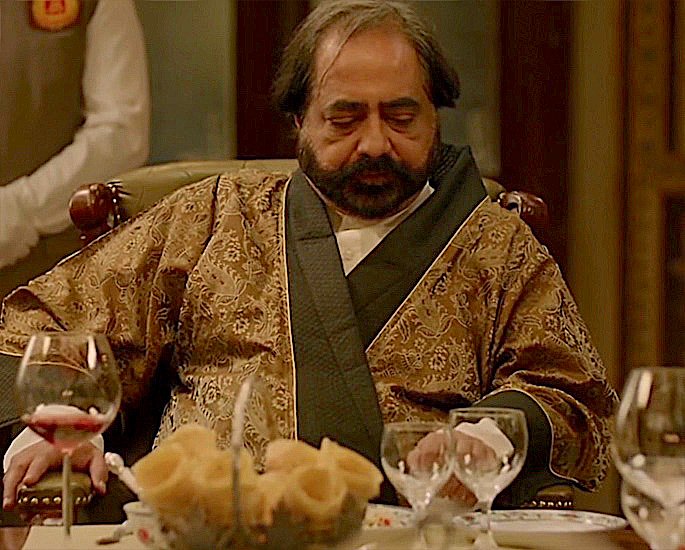 Khoobsurat is a rom-com film, comprising one of the most royalesque wine scenes of Bollywood. The royal home of King Shekhar (Aamir Raza Husain) is where this wine scene takes place.

Dr Mrinalini ‘Mili’ Chakravarty (Sonam Kapoor) starts to bond with her patient, King Shekhar over a glass of wine each.

During the scene, the two talk about family until they come across an old photo of the King who used to play a game called ‘tang ladai’ (leg-fight).

This scene induces a sense of belonging, spurring the King to get better. To this, the King says that those days were good, but they can’t come back because of his dysfunctional leg.

However, Dr Milli reassures him for hopeful days to come ahead. 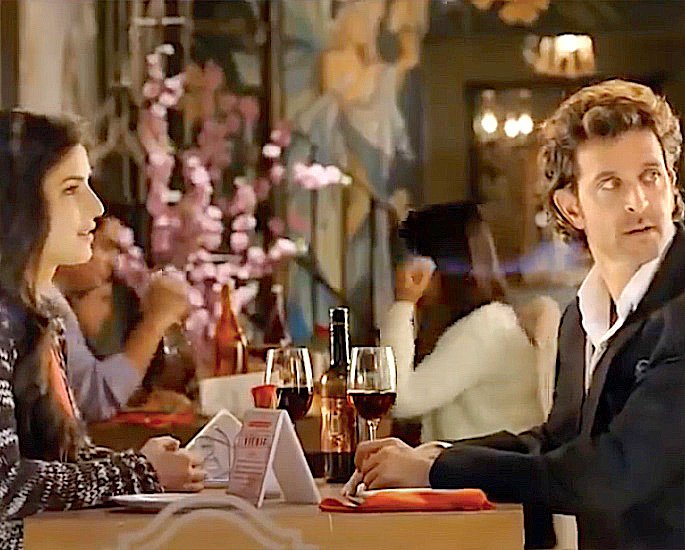 The action-comedy, Bang Bang! features the two leading characters in one of the lightest conversational wine scenes.

The scene begins with a restaurant waiter pouring wine for Rajveer Nanda (Hrithik Roshan). The waiter also acknowledges Harleen Sahni (Katrina Kaif) who is sitting at the table with Rajveer.

The two have a conversation, with Rajveer saying that he has to travel a lot

Harleen then reveals life details to Rajveer. She also expresses her wish to travel one day. 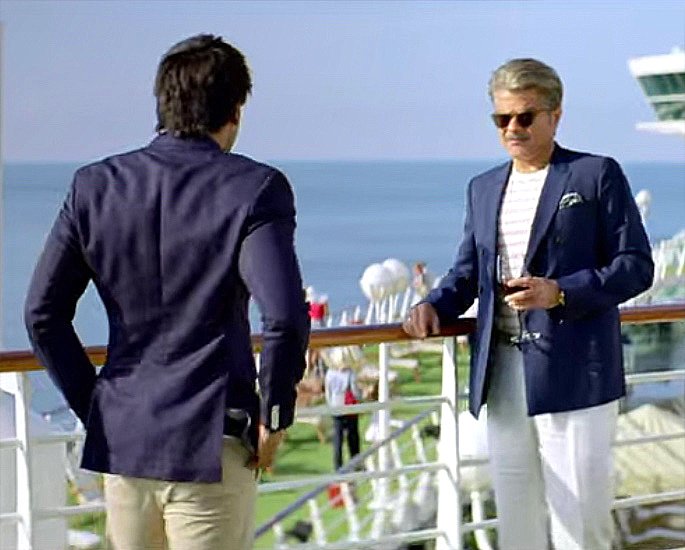 The comedy-drama, Dil Dhadakne Do is one of the most mature wine scenes, reflective of various perspectives.

The wine opens up as a rich class family celebrate their 25th anniversary on a yacht.

Kamal Mehra (Anil Kapoor) is seen having a relaxing time. This is by savouring a glass of wine with his friend Jamaal Hashmi (Shireesh Sharma).

The two have a conversation about Kamal’s son, Kabir Mehra (Ranvir Singh).

However, Kabir turns both of the men’s attention to the bigger success of his sister Ayesha Mehra (Priyanka Chopra Jonas). Kabir believes Ayesha is better in business than him. 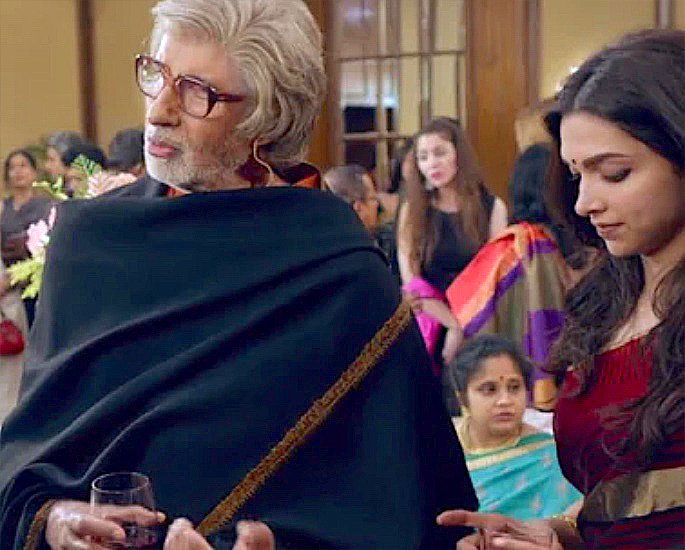 The comedy-drama, Piku, entails one of the most bitter-sweet wines scenes, with relevance to the relationship between a father and daughter.

Bashkor Banerjee (Amitabh Bachhan) is offered wine at a family party. However, his daughter Piku Banerjee (Deepika Padukone) steps in and tries to prevent him from having a glass of wine.

Piku’s intervention is due to Bashkor suffering from constipation. Though, her father is too stubborn to refuse a drink.

There are also scenes in the film where Piku is shown relaxing with a glass of wine at home.

The rom-com Love Aaj Kal 2 features one of the most emotional wine scenes, reflecting modern relationships.

The scene starts with Zoe Chauhan (Sara Ali Khan) having dinner with her boyfriend, Veer Taneja (Kartik Aaryan) and his parents.

This wine scene is a little emotional as Zoe confesses that she is trying too hard to form a relationship with Veer’s parents.

Zoe feels confused in the end only because she is a person who has constantly been hard on herself.

This ultimately leads her to believe that she cannot have it all. 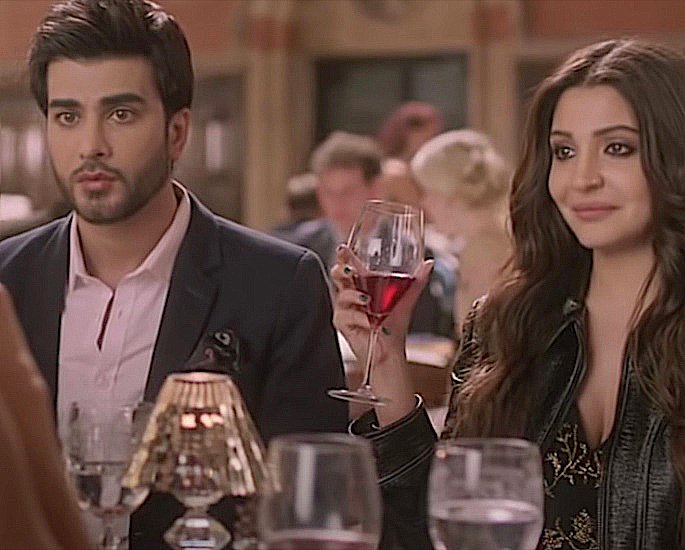 The rom-com musical drama Ae Dil Hai Mushkil has one of the most fan favourite Bollywood wine scenes.

In this scene, Alizeh Khan (Anushka Sharma) and Ayan Sanger (Ranbir Kapoor) decide to introduce their partners on a double date, having wine and dinner.

The scene is a witty one, depicting the idiocy of Lisa D’Souza (Lisa Haydon). She tries to look and act rich, elitist and overtly cultural.

Lisa passes on a judgmental comment about Anushka’s look. Lisa tells her that she looks “sick”.

She tries to act fake, asking Alizeh to hang out with her for a movie. Alizeh sarcastically replies saying that she watched a movie about how girls scam a rich guy. This is a clear hint to Lisa.

Thereafter it gets a little messy, with the two spilling red wine at each other. 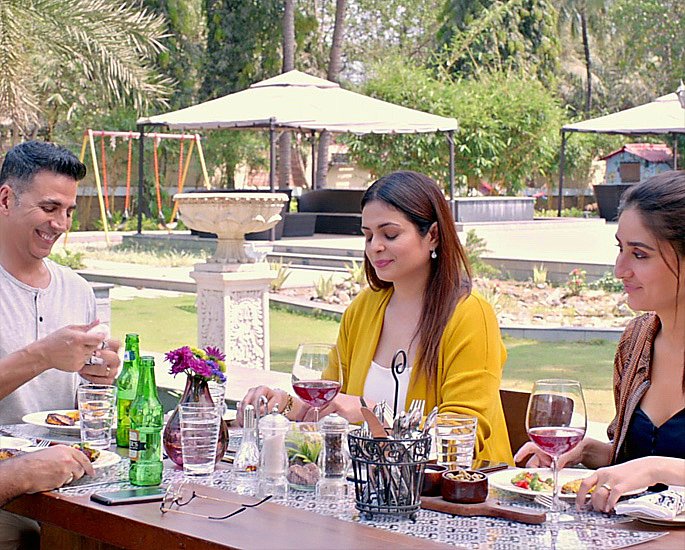 The comedy-drama, Good Newwz has one of the most significant discussional wine scenes.

The scene opens with Varun Batra (Akshay Kumar) grilling some food for his wife and friends. This includes his other half, Deepti Deepu’ Kashyap Batra (Kareena Kapoor Khan),

They engage in a healthy discussion over glasses of wine and a brunch,

By the end, Varun and Deepti decide to visit a fertility specialist.

Interestingly, all the above scenes mentioned are showing red wine.

These were our top 15 wine scenes to savour whilst enjoying some great performances.

Do not forget to re-fill your glass when relaxing after every scene.